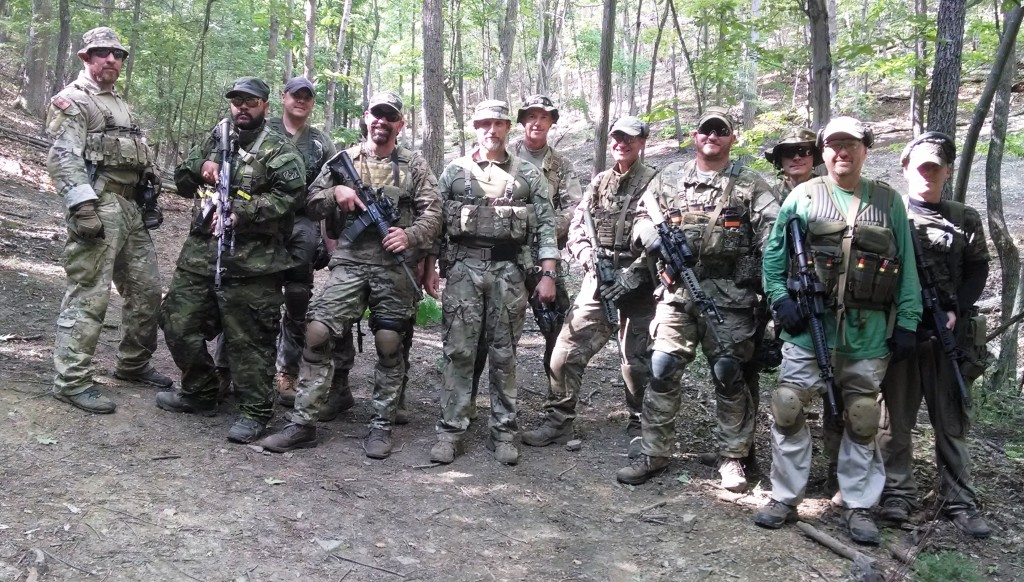 I came a little early for the land nav class, and got to help support the CTT class last weekend.  Sean T pitched in as well.  So we had a great mix of old and new students.  This was a great bunch of guys overall.  We had ethnic Russians, South Africans, not to mention the odd Brit, and an assortment of ‘Mericuns.  We had officers, and senior NCO’s.  We even had an honest to God cryppie.  And, Robert from JRH.
For instructors we had Max, and Chris.  Chris really stepped up and ran a lot of the evolutions, especially the jungle walk.  This gave Max the opportunity to finally catch Fred’s “C-B(u)RN” lecture.
The guys did really well overall.  I am still amazed at what Max gets accomplished in one weekend.  The final squad assault was awesome.  The guys were tired but pumped up from a great run.
Weapons.  More AK’s this time.  Everyone’s rifle ran well.  Round counts around the 1,000 mark.  Except for Idaho (and “Ivan”) who did every double run with me and the 1st Sgt.  BTW, did you know it’s ee-Von, not EYE-van.  There was talk of changing the target names to John, so as to be cold war neutral.
Equipment.  A mish-mash of assorted equipment.  It all WORKED, to one extent or another, but we gave a short commercial on the MVT gear, which is optimized for what we’re doing here.
Clothing.  Lots of different stuff here as well.  The multicam continues to impress.
Supplies.  Same as always.  Plenty of water/Gatorade.  High energy snacks.
For those of you that have already done a class, consider coming back out and taking another one.  The second time through was a real eye-opener.  You see so much more.  It’s like a whole ‘nother level.  If I could do this once a month I would.
For those of you that haven’t come out yet, get off the “X”.  This is the best live training available anywhere, even the military, before Ranger School.  Get you some of that.
Diz