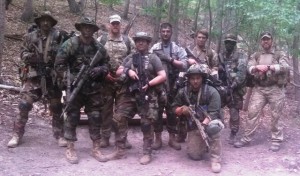 (1) Merely owning a rifle is not sufficient; you need to know how to fight with it in a real 360 degree environment

(2) A single man, even if he knows how to fight with said rifle, is nothing without team.

With that knowledge, I was determined to go back to the combined CRCD / Combat Patrol class, this time with friends. We had a group of four all set for the 2-6 Aug 2014 class.

The course starts with basic fire and movement techniques at the individual level and then goes on to team tactics for break contact and advance to contact. Max made some significant improvements to the facilities and the course itself in the year since I last visited. There are now more targets in depth, allowing students to push the assault further down range. This really hammers home the light infantry tactics Max teaches. With two fire teams conducting a simulated satellite patrol, the improvements allow both teams to go through the assault and fire support cycles. Violent, amazing stuff. By the end of the second day, the teams started to gel and became more efficient in prosecution of the enemy targets.

The two-day CRCD course is a great jumping-off point for the 3-day Combat Patrol class. CRCD class made me think I wanted a team of well-trained buddies if things go bad. Patrol class removed all doubt. You need a well-trained team. 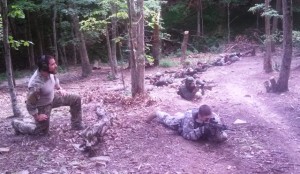 The Patrol class is simply packed full of classic light infantry stuff. Since I don’t have a military background, my knowledge was limited to reading the Ranger handbook, FMs and other books on small unit tactics. But reading alone does not prepare you or give you the feel for the violence, confusion and excitement of battle. This class does it in spades.

Max does two things here. First, he gives classroom teaching on patrolling topics: formations, hand signals, rucking, recon, ambush, raids, patrol base site selection, set up and routine, and clearance patrols. Then he puts it all into practical perspective by running drills around a pre-defined scenario and fictitious enemy. This is where the class gets really fun.

After a review of your ruck contents, the class goes out on a patrol towards the patrol base and lays a hasty ambush on the backtrail. Then it’s on to the patrol base site to occupy, run clearance patrols, set sentries and begin the work phase. Thankfully, he already dug the shell scrapes! Later that night, a briefing is held on a recon mission. 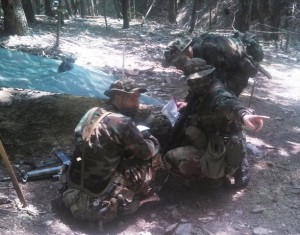 The class has the feel of an actual operation here, with maps, objectives and orders given. Teams are assigned recon patrols on two different objectives. Once the patrols are out, Max and fellow instructors switch over to OPFOR roles. You better hope you’re a snesky SOB, or they will spot you with thermal and NVG. A debrief is held afterwards to relay the intel, all in preparation for a raid on the enemy encampment the next day. 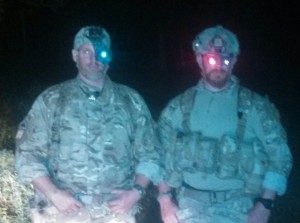 After the recon, patrol base routine begins at midnight, complete with sentry duty and attempting to sleep without the comforts of home, and stand-to in the morning. It’s a sure-enough field training exercise at this point.

The last day makes you feel that you really get your money’s worth. The team is taught, rehearses and then executes a prepared linear ambush on multiple pop-up targets. Loud, violent and nasty, you find out what is meant by “ambush weight of fire”. Then the group quickly withdraws back to the rally point since it, as Max says, just did a very bad thing to the enemy. 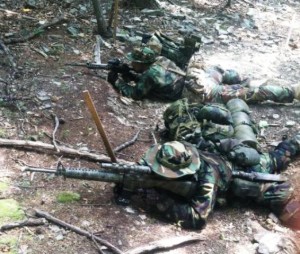 The capstone of the patrol class is the raid on the enemy encampment. Mannequins and pop-up targets are used as an unsuspecting OPFOR. The assault element slips up a creek bed while the fire support element gets into position. When fire support opens up, it’s game on for the assault group running up the creek bed to a flanking position. The fire support group shifts fire before the assault group jumps off in bounds. It is executed aggressively with the final targets shot at near point blank range. I really wished I would have installed my bayonet. Maybe next time. The exercise finishes with exfil before enemy QRT can arrive.

In summary, this class exceeded my expectations in delivering practical knowledge of combat rifle and patrolling tactics. If you always wanted to learn classic light infantry tactics but didn’t “sign up”, this is the course for you. There are few instructors that teach these tactics to civilians, and I’m not aware of anyone that has the terrain or facilities to match. Max and his assistant instructors all have the experience and passion to teach, so take advantage of it as soon as you can.