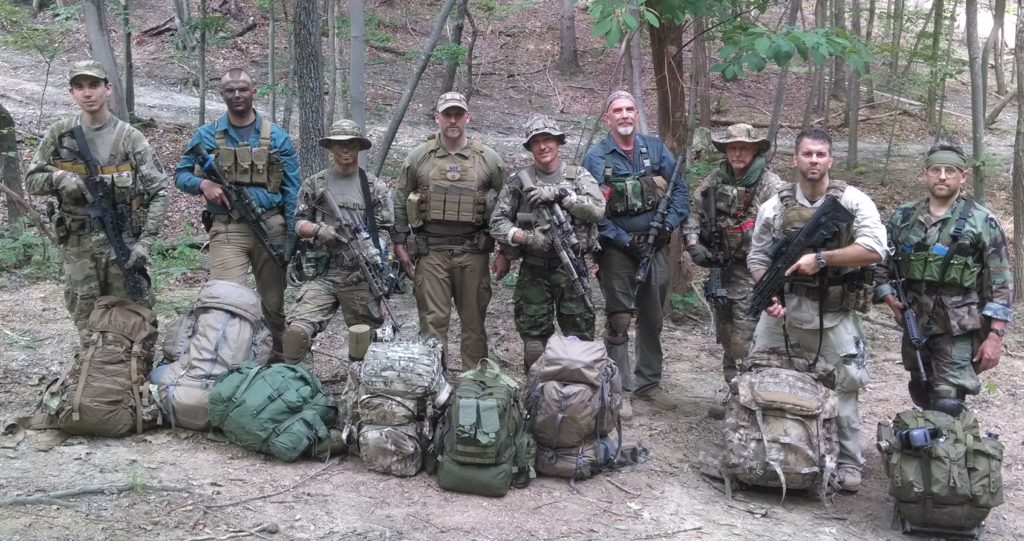 By Bob “The Old Dog”

I recently attended my second Max Velocity Tactical class, Combat Patrol (CP), held July 14 through 17.   As a former SWAT officer, I was trained in a variety of infantry related tactics that were used during operations that took place throughout my tenure with my department’s full time team.  It’s been 13 years since I left the unit and I realized I needed to update and upgrade my skills.  I attended Combat Team Tactics (CTT) earlier this year and Combat Patrol was the logical extension of that training.  As in the previous CTT class, Max did not disappoint in the delivery of Combat Patrol.

The July class was the first run of the new four day CP format.  Day one consisted of a comprehensive review of CTT.    I’m glad the change was made.  It set the tone for the remainder of the class insuring all participants were up to speed on movements.

Combat Patrol presented a comprehensive look at the process of planning and executing a patrol operation under austere conditions.  Attention was given to the need for detailed plans and information to ensure success of the intended operation.  As patrolling forms the basis of infantry tactics, the emphasis/need for planning was timely.

I don’t want anyone to think this class was all about lecture.   After each block of instruction, Max and AI Nate, got the class up and we put the information to use in different drills and movements including practical exercises in actions on contact, planning/executing an ambush and carrying out a recce patrol.

Throughout day three, the class was prepped for a tactical layover segment.  This phase gave everyone a chance to participate in the preparation of an overnight position.  A lot of folks found out just how heavy gear can be if you’re not careful about packing.  Max added some tricks of the trade including comms lines, field craft/outdoor living and passage through friendly lines.

Day four started in the overnight position with a “stand to” exercise.  We broke down the position then patrolled back to the class area for instruction in raid preparation and execution based on information collected during day two’s recce patrols.  The final exercise involved patrolling to and execution of a deliberate raid on an “enemy” position.

I strongly recommend Max Velocity Tactical instruction.  Max’s teaching style is concise and to the point.  There is little wasted time and things move along at a pace that presents information without overwhelming a student’s ability to assimilate the instruction.  I’m already signed up for a 2017 Texas CTT/Mobility class and plan to attend a force on force session at some point.  Unfortunately, I’m confident that the information and skills presented in MVT classes  will be needed in the real world sooner than later.