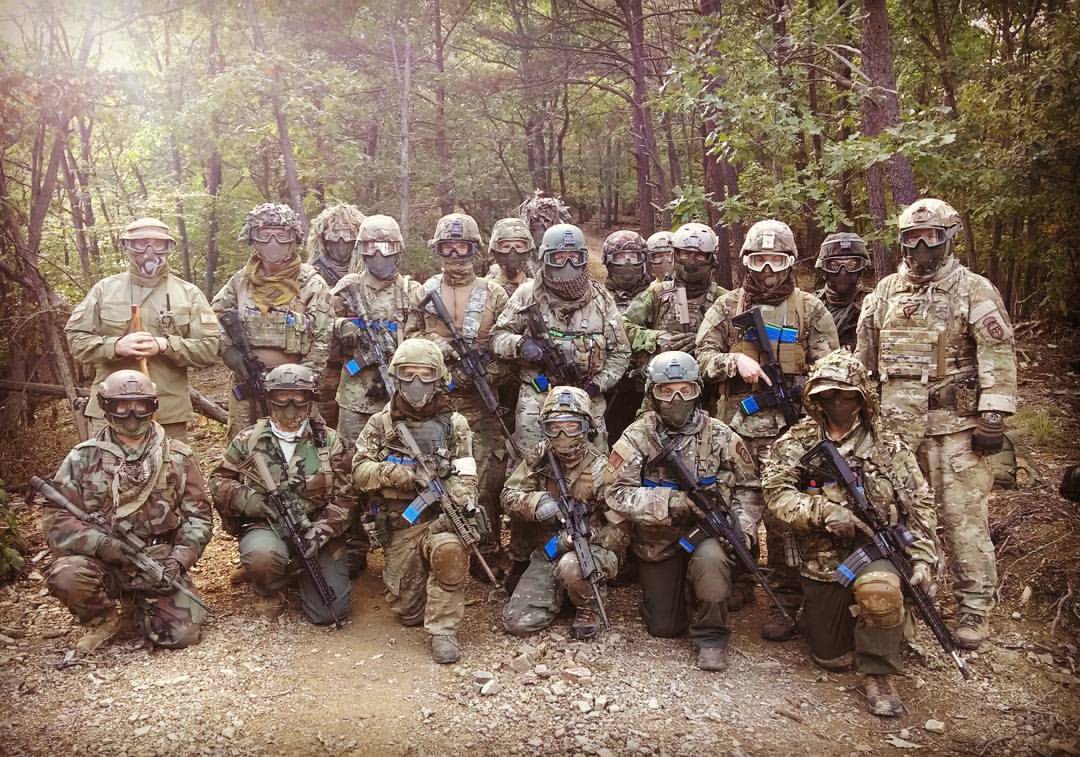 What an awesome way to spend Father’s day weekend- whacking people with UTM training rounds with your son at your side! We even rode to Valhalla on a flying dinosaur that shot flames out it’s butt after that! Just kidding, at least the last part!

This was my fourth time taking that class, I think I’ve attended every one Max has offered in West Virginia. I can’t wait to go again.

“Robert are you serious, you paid good money for the same class FOUR TIMES?”

You’re damn right I did and I would do it again real soon! Not only that, I brought my son for his second iteration of Force on Force Team Tactics. I first brought him in October and it was his introduction to MVT training. He had recently turned 16 and enjoyed the class quite a bit. He had trained with me doing similar training with live weapons since he was 12 years old. However it’s quite a bit different working with 6-8 people at a time doing this sort of thing, versus 18 people, with half of them acting as your enemy. Paper and steel targets don’t have a brain, they stay right where you put them. They don’t maneuver on you. The enemy has a say in how these things play out.

The UTM training ammo is a marking round projectile that travels at 370 FPS. It is loaded via rounds that are .223 sized and have a colored marking tip. They are put in standard AR15 magazines, with the regular AR bolt carrier being removed and a special UTM only bolt being put in its place. In short, you can’t screw this up and somehow fire a live round. Not that you would get a live round to the area where training takes place- we are all checked over before each class. Even if that happened, the UTM bolts will NOT fire live rounds. So in short, it’s the safest way to practice small unit tactics. It’s also a great way to get folks into tactical training that may be concerned about safety.

You’re loading the UTM rounds into AR magazines and shooting them through real rifles (if you could call an AR a “real rifle” LOL. A little AK afficionado’s pun there!!!) so it will show your weapons manipulation skills as well- under pressure. Standing behind a bench, with all the time in the world, under shade, taking your sweet arse time shooting is a good bit different than what this entails. Several students were admonished to get their weapons up quickly and get rounds on targets quicker. Some were shot in circumstances wherein they should have easily whacked the other party. I can attest to this having to have to bound across a large open area to secure a flank. I was thinking the whole time I was going to get clipped right here. But the other side was firing slowly and not adjusting well. They got rolled up, six of them, by largely just two guys. Morale of the story- this isn’t Appleseed, or bench shooting where you fire one round, eat a donut, smoke a cig and then fire another round. This is more combat application of fire. The ones who did not apply that were hit, the ones that did, usually prevailed.

Max gives both teams a chance to rehearse dry drills Saturday morning. This helps bring everyone up to speed as well as gives newer folks a chance to play a little catch up if they haven’t trained in a while or at all. It also tends to give the squad leader and team leaders a chance to get a handle on what they have to work with, before the “games” get started.

Here I should prefice that while they are “games”, this isn’t any paintball or airsoft BS. In four times taking this class the only time I saw someone run off on their own doing crazy “paintball” type stuff he was chastised for it- and rightly so. This class is about working with a TEAM, hence the name TEAM TACTICS. If not, it would be called “Force on force, do whateverthehell you want” class LOL. This isn’t about just having superfun time out there, it’s about LEARNING these skills and APPLYING them.

About half of the “games” are team against team capture their base/flag type of deals and about half of it is scripted scenarios. This includes iterations where a number of people are tasked to just be defenders of a handful of “bunkers” and 12 or 13 are tasked with attacking them. Two iterations were done wherein several defenders stayed at and defended the CQB training buildings and the others were tasked with making a covert infiltration and then attacking and clearing the CQB buildings. (Max Adds: There is an optional CQB Intro Day on the Friday, to give you a head’s up on CQB. There is also a full 3 Day CQBC, next class in August with 2 spots only remaining).

The cadre are there and one moves with each team to observe. They typically will not help a team with mission planning but sometimes there are gentle nudges if a plan is really out of whack. After that iteration is over, a thorough debrief is done, with cadre commenting on what was done right, what was done wrong, what could have been done differently, etc. While it’s largely a student led class, Cadre are always there to help if need be and the debriefs are some of the best learning in the class.

“But FOUR times Robert? WTH over?”

This isn’t a square range pew pew pew pew class, although I’ve done literally hundreds of them. This class is truly about application of what you have learned.

Doing combatives for about a decade now, I can tell you that you can come in, hit a bag, practice your ground work with a compliant partner, etc. and that it is NOT the same as fighting someone in a match or real life. My first couple matches I participated in I had tunnel vision, auditory exclusion and was doing well to keep my head above water. The first time I took a good hit to the face that rang my bell I just walked off the mats, a little disoriented to what had just happened. Over time, learning to control the psyche, breathe properly, etc. this all changed and my psyche (for lack of a better term) rarely gets elevated on the mats any more. Things become more of a chess match than an “oh crap, what’s happening?” always behind the curve event.

I’ve noticed that same phenomenom with some folks doing force on force for the first time. I believe this is why we are seeing people having to be told to fire their weapons, to take cover and other things that- to the casual observer or the internet “monday morning quarterback” (read, the guy that never does this sort of thing so doesn’t know) it seems obvious that they should be doing it. I can watch a UFC fight and be yelling “there is a triangle, do it!” but being in the fight and doing that when the split second recognition of it comes up is a much different thing.

So the real value of doing the class multiple times is in both seeing the improvement of skills (or you should be improving anyways) but also in getting more “used” to the circumstances of the fight. We cannot control every aspect of the fight- the enemy has a say, your team mates may do some stupid crap you cannot control, you may vary from the plan and do stupid crap yourself, you will take casaulties, etc. “The fight will be what the fight will be.” And just like a combatives fight, it is not scripted and will not always go the way you want it to. Best laid plans of men and mice.

Learning the “flow” of the battle and learning to sense and “feel” (for lack of a better term) the fight are invaluable skills and are only gained through repetition. You cannot read an online post about them, or read a book about that. And you likely will not learn it bench shooting ten rounds while eating a dozen glazed either.

Getting used to the fight by doing multiple iterations of the class was shown to me by the way my son had drastically improved since taking the class with me last fall. Last October, I really felt like I had to “direct” him more- “move up here”, “watch that flank” etc. Every time I thought to say something like that to him this go around, he was usually already doing it. He learned to take the initiative himself and became an valuable team mate to me. Seeing his improvement was the best Father’s Day gift a survivalist could get!

And we will be back again at some point to do it again.