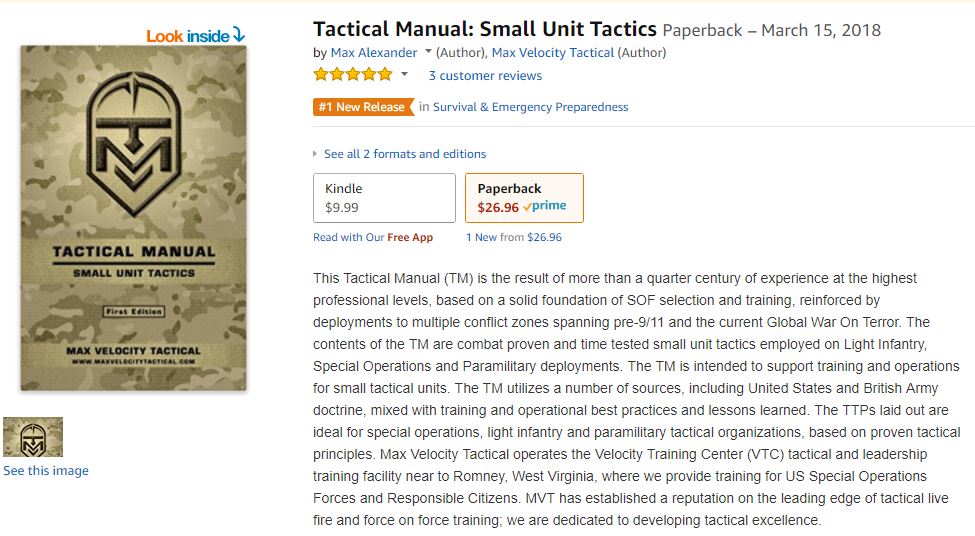 The MVT Tactical Manual is currently the #1 New Release on Amazon.com: Survival and Emergency Preparedness genre!

But, so what. That’s all good marketing speak, but probably pretty irrelevant due to the spike in initial sales after the manual went up on Amazon. The real point is that this Tactical Manual is not written for that genre, it is written as a light infantry manual that can of course be used by responsible armed citizens. It can equally be used by light infantry, special operations or paramilitary organizations.

No, this is not a reprint of any previous books. There are some common areas, such as vehicle drills, to Contact!, but other than that the manual was written from scratch to cover small unit tactics in great detail, including new areas such as detail on CQB etc.

2) Why buy this rather than, for example, FM 7-8 or The Ranger handbook?

This Tactical Manual goes into great depth on small unit tactics with what you actually need to know to conduct them, informed by personal lessons and experience, and also offers you several different ways of doing things. For example, three types of deliberate ambush over 30 pages on the subject. If you are an armed citizen, military manuals are actually pretty terrible, and the Ranger Handbook is very trammeled and prescriptive to specific tactics or ways of doing things. Although the TM gives you ways of specifically conducting operations, it also gives you reasons why and options. If you are military, this will broaden your knowledge and application. The TM is not a re-hash of FM 7-8 as so many are, but rather the result of British / U.S. training and experience informed by personal experience and lessons learned, best practices.

The TM is just friggin excellent! Pocket sized and jam packed. Plenty of clear diagrams and explanations for even the dimmest bulbs. Much more than Contact! and essential for those who have attended training and those that plan to go. I couldn’t be happier. The condensate of numerous FMs and TTPs, this is something a TL puts in his ruck or leg pocket for continual reference to train, review and plan. Multiple copies for your guys, especially the one’s who haven’t shown up yet.

A very well written and readable tactical manual. You can’t learn tactics just from reading, but as an adjunct to Max’s training this book is invaluable.
There are other books about small unit tactics available, but most if not all are regurgitated US military manuals, which rely on weapon systems, numbers, and logistical support unavailable to the average prepared citizen. Max’s book is written for just this citizen, and presumes that the unit will be armed with no more than small arms. Fire and movement tactics are the focus, rather than simple dominance by superior firepower.
This is a very accessible book for anyone wishing to take the next step in their firearms training, and move from individual skills to team tactics. I can’t recommend it highly enough.