We completed the second MVT Rifleman Challenge this past Labor Day weekend. Challenge II was a great event. I have photos to go through and a video to make; hopefully I will be ready to post that later this week.

Of the 14, 11 walked away with their Rifleman Patches. 2 of those were ones who had not met the standard (due to their 2-Miler time) last spring.

Aaron won the 2-Miler event with a time of 22:19. Unfortunately, he had to leave on day 2, due to a family emergency, and so will be returning to earn his patch. Aaron, like Jon who won the first challenge and helped me beta-test the  new route, is an outlier in terms of exceptional physical fitness, and his time is not representative.

Mike Q won the competition. He did not earn a Vanguard time, but overall he placed first. This shows how the competition values a group of skills. Of the 8 pass/fail events on the Challenge, 4 are specifically scored to place people for the competition part of the event: 2-Miler time, Shoot score, Navigation time and Weapons Manipulation time.

Winston earned his Vanguard patch and came second overall on the competition. In fact, Winston and Mike Q were tied for first place and we had to run a tie-breaker. Winston only began his foray into tactical training last April, with a series of MVT Training Classes and physical fitness training. Great effort!

Greg placed 3rd. Wow. This guy (Dentist!) is 61 years old. He didn’t make the 2-Miler time in the spring, went away and lost 22 lbs, came back and ran a Vanguard time! He also won the Land Nav!

There were 6 competitors who remained in the competition to score a place. The others, although they met the standard and earned their patch, for one reason or another knocked themselves out of the points race due to one event or another.

Robert from JRH Enterprises, who sponsored the prizes with some excellent gear, won his Vanguard patch, was winning overall after Aaron departed, but knocked himself out of first place on the Land Navigation event.

The 2-Miler times were adjusted to achieve the aim of the competition. I had run the course a couple of times myself, and Jon ran it, but like Aaron we are outliers, all coming in at around that 22-23 minute time. The aim if for the Rifleman standard to be a gut check, but attainable if you train for it. The Vanguard time is more of a challenge, to aim for. If you haven’t seen the course, you won’t understand, from simply looking at the times, which seem easy.

These are times that are attainable if you train sufficiently, but that cannot be achieved straight off the couch, and reflect effort and a realistic combat standard of PT. Raising standards is the point of the event, and it is designed as a CHALLENGE. The 2-Miler course was dubbed, by the students, “The MotherF**ker” and the hill that you have to ascend twice “Heartbreak Ridge.” 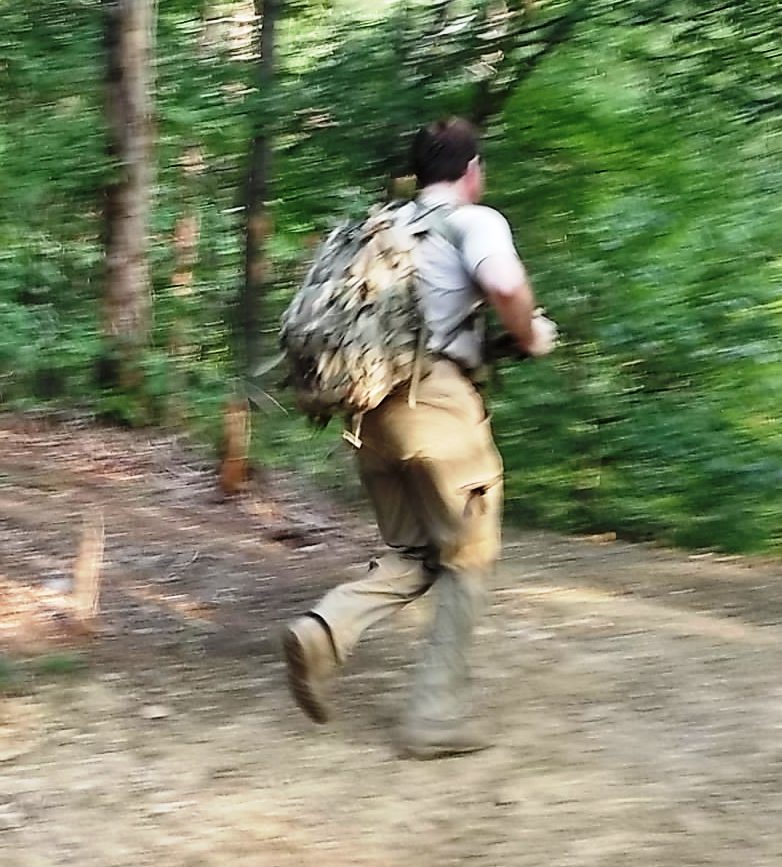 Each day involves some PT based event, and the 3 days will tire you out, to simulate operating under stress in a combat environment:

On another note, you may have missed this post on the Citizen Close Combat Class (C3) and the amended MVT Class Progression. C3 has become an advanced Alumni tactical clearance (CQB) class. Combat Team Tactics (CTT) is a pre-requisite. C3 now sits alongside Combat Patrol as graduate-level alumni classes. We have the next C3 class coming up on September 26-27. Let’s stack it up with Alumni, which is what happened on the August inaugural class. See the post here for the detail.