This morning I was reading a piece by Selko (H/T WRSA) and in the article he was talking about hobo vehicle armor.

Here is the quote:

“When he came to pick me up I noticed that rear lights on his car were smashed, broken. And inside car he had some kind of steel plates with hooks and wooden bars that you could kinda attach to the inside of the door…….On our way back he changed position of some steel plates inside car because he expected different directions of possible incoming bullets.”

This reminded me of some information I was putting out on forums before I started this blog. Of course, given the nature of many forums, much this information was not well received. I was simply talking about the ability to up-armor your vehicle and thus increase your survivability. 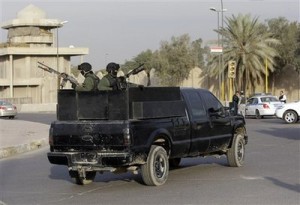 In this blog post ‘Moving By Vehicle in High Threat Environments’ I include this quote:

“Remember that your vehicle gives you no protection. Rifle rounds will cut through the vehicle like a ‘knife through butter’. The only ‘hardened’ areas in a normal civilian vehicle are the engine block and the metal parts of the wheels. This is why if you are taking fire position next to a vehicle, you want to shelter by the engine or wheel wells; preferably you will then move away from the vehicle into a fire position in hard cover. You should consider how you may be able to change this by creating better ballistic protection in the vehicles. Wearing body armor is a help but provides little protection to the side of torso and thighs that are vulnerable to side shots as you are driving. Younger kids will also not be wearing it. You should consider how you can better ballistically protect the vehicle and occupants from this kind of threat. You can fix steel plate to the inside of doors if you have the capability. You could put all the seats down in the back of a van and put in an open top steel box with access doors to shelter the kids in. If you can’t go this far, you can consider other types of ballistic protection by where people sit, even phone books will stop a round! Spare body armor and ballistic plates lining the side of the vehicle, other types or hardened material will also work including creating a space inside the load you are carrying in which to shelter kids. You also need to know that in a normal car, the ballistic protection thing works both ways: the vehicle skin will not stop incoming rounds, which also means that you can fire out through the vehicle if you need to. Don’t worry about winding windows down, you can fire out through the glass or body of the vehicle as you need to.”

You see, due to some of the levels of full retard out there on these forums, some people are incapable of seeing things by degree and not in absolutes. Once you talk about the concept of hobo armor on your vehicle, all they can see is that the vehicle is not a fully production armored vehicle. They start talking about how they can get you from this angle and that angle and do this and some other tacticool that. The bottom line is they are missing the point. In the absence of a production civilian armored vehicle, you are simply trying to increase the chances of surviving, should you have to move by vehicle on the roads in a hostile environment.

In the early days in Iraq, we were using locally procured pickup trucks as gun trucks for some of our people. Due to the high risk of travel on roads, and the frequent kinetic incidents, we felt that it would be useful to add as much protection to these vehicles as possible. If you remember, this was back in the day when the U.S. Army was having all the controversy over hobo or hillbilly armor on Humvees. Back in these early days people were approaching the problem from different angles. The IED threat was on the ascendance, and I remember seeing outfits operating in soft skin vehicles with the doors removed to allow hasty de-bussing. 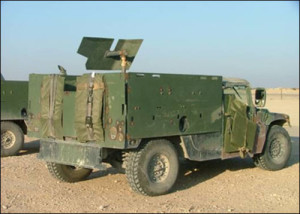 When I was still in BritMil in the early days of Afghanistan post-9/11, that was still pretty much the deal, driving around in unprotected vehicles with the emphasis on getting out when a contact happened. I remember an incident being reported where a German patrol had been hit with an IED in Kabul, and that pretty much spelled the end of their patrolling operations. In many ways, the game we know today was just beginning.

We were doing quite a bit of road travel around Iraq, so we did the following with these pickup trucks: we tested steel plate to withstand impact from 7.62 short, i.e. AK rounds. This would not withstand strikes from 7.62 long, i.e. PKM fire (equivalent to an M 60 or 240). As per my point earlier, it’s all about compromise and not absolutes. We had a local guy remove the paneling from the inside of the doors and bolt steel plate to the inside of the doors. We had this cut so that it sloped up above the window to provide some protection up to shoulder and neck level. This protected from both AK fire, and IED shrapnel 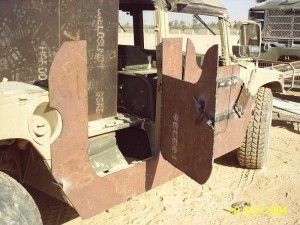 These were high profile vehicles, so we weren’t worried about disguising the armor. We wanted to put PKM machine guns pintle mounted on posts welded in the truck beds of the pick up trucks. Once we had the posts built, we had a metal box installed in the truck bed to protect the gunner. So, as you can see, it was a compromise, not the whole answer, but given the high velocity bits of metal flying around any coalition forces moving on roads in Iraq, any protection we could enhance was a good thing.

This was also the first time that I used the dump truck idea that I use in ‘Patriot Dawn: The Resistance Rises‘ as mobile gun/mortar fire base vehicles.

At the same time as we procured the pickup trucks, we also got the dump truck, which we enhanced with a sandbagged bed and steel plated sides, plus up armoring the cab. This was our ace up the sleeve. What I would do is place the dump truck slightly back off the rear of our convoy. The gunners would be seated, hidden below the sides of the truck. To any observer watching our vehicles, the dump truck would be taken as the first vehicle of local traffic following behind our convoy. Thus, when the ambush starts, as it inevitably would,  you have a hidden reserve able to bring fire down on the enemy.

So, if you want to bug out with your family and all your gear in SHTF, get a dump truck!

All joking aside, my point is that if you had to bug out in vehicles, or even just move locations, you want to protect your loved ones as you do so. In a hostile environment any vehicle moving on the roads, whether mobile or static, is pretty much a bullet magnet. Yes, I’m not even talking about additional protection to the engine block (or run-flat tires). They may immobilize you in an ambush, which is why you have ‘actions on contact’ drills, including cross decking vehicles if one is immobilized. I do cover these drills in detail in ‘Contact: A Tactical Manual for Post-Collapse Survival‘. Do what you can in the circumstances.

If you had kids in the back of your vehicle, any kind of protective box that you could put around them, even if it is just supplies, will enhance their protection.

As usual, there is a question of profile, or posture if you will. I note with chagrin that when I start writing about this, often from the military types with a narrow base of reference, they start assuming that you will have guys standing up through sunroofs and all sorts of crazy stuff.

I can’t tell you will the situation will be, it may be that any vehicle on the roads is an instant target, or it may be that you will only be targeted if you look juicy enough. Given that, think about lowering the profile of your vehicles. Make them as innocuous as possible, even using minivans which can hold a lot of gear and even a little protective box for the kids in the back. Yeah, they’re not cool, but it’s an idea.

Keep weapons ready but within vehicles. Unless we have gone full Mad Max, you don’t want them poking out the windows like an Iraqi police vehicle. There may be other factors at play here also, such as the need to pass through checkpoints, but that’s a slightly different topic. In simple terms, just think about what you’re doing, and the impression you are giving to others.