I received the following question by email:
In one of your previous articles on gear carriage, you mentioned that the Paras were expected to be able to survive with what they carried on their battle belts (for 48-72 hours, if I remember correctly). I simply don’t have room for foodstuffs as I have mine set up now. Just FYI (starting at the left front and moving anti-clockwise): I have two pistol mag pouches, two double rifle mag pouches, a dump pouch, med pouch, pistol, and a single pistol mag pouch at the right front. My vest has a Camelbak for fluids. Can you suggest a way to carry food without relying on a patrol pack?
What he is referring to is an ‘old school’ set-up where Paras would carry 48 hours worth of ammo, water and food on their belt kit. In the British Army, the battle belt is simply refereed to as ‘webbing’. So, you would wear your webbing and then you would have a ‘bergan’ (i.e. ruck) and also a patrol pack that would be stowed under the lid of the bergan when you were carrying it all.
It depends on the era what the exact set-up would have looked like, so I am going to include some photos here with explanations. The thing to remember is that a full ‘web belt’ would not have had to make room for all the kinds of things that the question above refers to. Paras wore a ‘para smock’ except when operating somewhere hot like the jungle or the bush, in which case they would have worn a jungle shirt, like an ACU shirt. The smock was used for a lot of additional gear in the pockets and even stuffed down the front (think ammo belts) and also there was no need for a dump pouch because empty mags would just go down the front of the smock/shirt, stopped from falling out the bottom by the battle belt itself.
There would not have been:
Dump pouch (use smock).
Handgun (not issued old school)
IFAK (just a couple of ‘first field dressings’ taped to the belt or suspenders/harness)
The classic way of wearing webbing like this was very good in hot conditions, allowed the carriage of a lot of gear when you were living out on patrol, and sat very well with a short backed ruck which would sit on top of the rear webbing utility pouches. This system has since been superseded by MOLLE pouches on the outside of body armor, chest rigs, tactical vests and a whole other bunch of ways that gear can be worn nowadays. However, it still has its uses when operating dismounted and looking to carry decent amounts of gear. In many ways, a full web belt worn with either a ruck or patrol pack is the ideal way for a dismounted infantryman to operate. I used to find it very comfortable and I am entirely comfortable in a battle belt. It just loses some utility when you are sometimes operating in vehicles.
One thing to note – these full sets of web gear are often set up with the use of a padded hip protector or nowadays you can get a purpose built padded belt attachment for that. Also, because they can be heavy, the pouches need to be either sewn together, tied or bungeed down tight so they don’t flop around. Really, you want the weight to be a solid mass on your hips, not flopping around. Use of a padded MOLLE belt can help with this. Don’t put large pouches, like ammo pouches, forward of your hips, they will impede you when crawling.

Above: wearing of full webbing belts in a jungle environment (Africa)

Above: Old School Paras (Falklands, 1982) wearing the old style canvas webbing. Note the use of roll-pin belts foraged from riggers. They do not carry patrol packs, they were not around at the time. All the gear was either in the webbing, or in the ruck. No ruck, means everything you need is on your belt kit. The old webbing shown her used to have a roll attached above or below the rear kidney pouches for your poncho.

Above: PLCE webbing used in a more modern setting, with body armor. Harness under the body armor.

Above: PLCE webbing used with a patrol/assault pack, body armor worn. Note the bayonet!
So, to answer the original question: if you want to set up a battle belt to carry more items such as rations, you will still want to include some things that that questioner mentioned, such as a handgun. However, the key thing to this is really in the three or four pouches that you have around the back of the belt, in the small of the back or kidney area. These include the canteen and ration/utility pouches. That is where you keep the extra gear. If, as he says, you have a Camelbak, then you can downsize to one canteen and free up real estate/a pouch, either a place for the IFAK or more rations etc.
You should be able to fit something along the lines of two canteens (or one and an IFAK), 48 hours worth of rations, metal mug and a small folding solid fuel stove in those back pouches. The problem comes when we look at modern gear such as night vision and all the rest – it becomes that you always end up carrying a patrol/assault pack in order to be able to carry all the things that you need to carry. If you put an IFAK on the belt, you lose another admin pouch, That is why you end up with canteens, rations and all the rest in a patrol pack. Using radios also come sin – where do you put the radio pouch? For the little hunting style walkie-talkie radios, you may just mount it on your front somewhere and use an earpiece.
Note that webbing, when worn with a harness (suspenders) should sit down on your hips. That is why the large US sustainment butt pouch does not fit very well, because it actually sits up a little higher on your back and will impede the use of a patrol pack or ruck. With a full set of webbing, pouches around the back, a patrol pack or ruck will sit level on top of the rear pouches, both disallowing and rendering redundant the waist belt on a ruck. 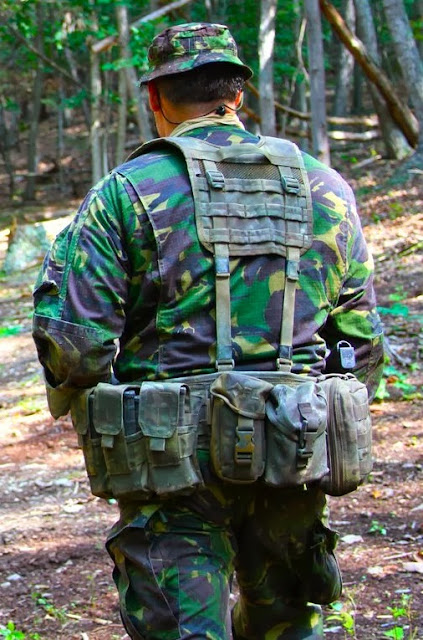 Above: I am wearing a modified belt rig. From the Left: 3 x double mag pouches, FLIR pouch, admin pouch, IFAK. Then out of sight to the right is my handgun and round the front are some handgun magazine pouches. This is just one way that I had my battle belt set-up on one of the training weekends. This set-up is weak on admin pouches and could be done differently if more rations were to be carried. .
Any further questions or request for clarification, please put it in comments.
Live Hard, Die Free.
MV