I’ve been moving house. Still am. I didn’t have any internet until today, when they hooked up the satellite. Most excellent.

Here’s an update and a candid admission on stupid: Knife safety.

We all carry those little folded pocket knives right? Great. Well, a few months back, I stabbed myself in the thigh with mine. How? Opening packages. Went in a couple of inches. It seems as I get older, and busier, I hurt myself more often. When our kids were just babies, it was the same. Not enough sleep, too much going on, and you suddenly have no short term memory. Everything is done in a rush, and you forget stuff or do stupid things. We called it ‘baby head.’ Think about that under the stresses of an SHTF situation – worse if you are not physically in shape and are even more exhausted than you needed to be.

An illustrious student, a trauma Doctor, who I will not mention unless he chooses to name himself, cut open the outside fleshy part of his hand on the first morning of a CTT class a while back, over a year ago before we had the pavilion. It happened in the parking lot, with a pocket knife that malfunctioned in his pocket when he put his hand in. He had a retired Navy corpsman stitch up his hand as a training exercise, and soldiered on through day 1 of the class.

Well, while moving (in a rush), I was trying to open a packet of ratchet straps at the back of my truck. Like trying to break into Fort Knox. As I applied force with my pocket knife in my right hand, it suddenly gave and I stabbed myself right on the inside  of my left wrist, with some force. Yes, right where you cut yourself if you are trying to end it. Well, there was massive venous bleeding. It wasn’t pulsatile, so I hadn’t cut the radial artery, but there was no stopping it. I had a tourniquet on the inside of my truck door, so I threw that on. Bingo, no more bleeding – well, that isn’t the complete story – being a bit of a pussy, I tried to put the CAT on above my wrist, to save my arm the pain. Oh no, that doesn’t work – because we all know a TQ should go on ‘high and tight’ on the long bone. So I reapplied it high up over the bicep, pressuring the brachial artery, and then – bingo!

I had my wife drive me to the ER. Getting stuck at the level crossing as the 10 minute train went past didn’t help. Yes, tourniquets do hurt. However, I did enjoy explaining to the triage nurse that my laceration was no longer bleeding, but pointing out the tourniquet and asking her if she wanted me to take it off to show her how much it was bleeding….got seen pretty quick.

Anyway, I got fixed up in the ER, and as punishment for my stupidity, I also caught the flu. Or Ebola. I’m not sure, but I seem to be getting better – but I did wonder why they were all wearing face masks at the hospital.

None of it helped moving, which has continued.

This leads me on to this: violence. It reminded me of the fact that if you get involved in a knife fight, you will be cut, even if you ‘win’/survive. Simple ‘defensive wounds’ such as mine to the wrist/hand/forearm area would be the best outcome. Have  a plan to stop yourself from bleeding out.

Which leads me nicely to this:

While I was without internet, I read a book. It was excellent: ‘Facing Violence’ by Rory Miller. 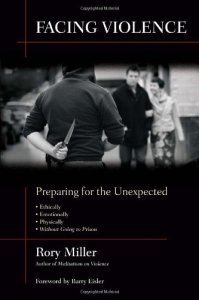 I really liked this book. I think he hit the nail on the head. It’s not a martial arts technique book – it’s a mindset book. I’m thinking of putting it up in the sidebar on the forum, it was that good. This book should be read as a companion to ‘Contact!’ because it simply supports and embellishes with such expertise the concepts I try to push about denial, and training, and the freeze, and mindset.

I get a little jaded with the FM warriors and blowhard keyboard commandos who really have no idea what they are talking about. There is a line in the book, to paraphrase: ‘If you thought about what violence would be like, you looked at a realtors listing for a house. I live in the house.’ Yet he is not arrogant, and does not write with arrogance. Yet, there is so much the ‘story’ people have of themselves tells them what they will do when faced with violence, and then there is actually what they will do.

There is so much in there that translates across from his focus largely on hand to hand/close combat style violence, to our focus on small unit tactics and general survival both now and SHTF. This book will help you if faced with violence under the current rule of law, and if we find ourselves without it.

Such as when he talks about beating the freeze, and the types of freezes  and their causes.

When he talks about alertness, avoidance, mitigation, routes, how you carry yourself, I ws thinking about what we teach at MVT on the Combat Team Tactics and Combat Patrol Classes.

Final point: I also just happened to read this, after I cut my wrist:

This is the official citation for Staff Sergeant Leroy A. Petry, awarded the Medal of Honor:

For conspicuous gallantry and intrepidity at the risk of his life above and beyond the call of duty:

Staff Sergeant Leroy A. Petry distinguished himself by acts of gallantry and intrepidity at the risk of his life above and beyond the call of duty in action with an armed enemy in the vicinity of Paktya Province, Afghanistan, on May 26, 2008. As a Weapons Squad Leader with D Company, 2nd Battalion, 75th Ranger Regiment, Staff Sergeant Petry moved to clear the courtyard of a house that potentially contained high-value combatants. While crossing the courtyard, Staff Sergeant Petry and another Ranger were engaged and wounded by automatic weapons fire from enemy fighters. Still under enemy fire, and wounded in both legs, Staff Sergeant Petry led the other Ranger to cover. He then reported the situation and engaged the enemy with a hand grenade, providing suppression as another Ranger moved to his position. The enemy quickly responded by maneuvering closer and throwing grenades. The first grenade explosion knocked his two fellow Rangers to the ground and wounded both with shrapnel. A second grenade then landed only a few feet away from them. Instantly realizing the danger, Staff Sergeant Petry, unhesitatingly and with complete disregard for his safety, deliberately and selflessly moved forward, picked up the grenade, and in an effort to clear the immediate threat, threw the grenade away from his fellow Rangers. As he was releasing the grenade it detonated, amputating his right hand at the wrist and further injuring him with multiple shrapnel wounds. Although picking up and throwing the live grenade grievously wounded Staff Sergeant Petry, his gallant act undeniably saved his fellow Rangers from being severely wounded or killed. Despite the severity of his wounds, Staff Sergeant Petry continued to maintain the presence of mind to place a tourniquet on his right wrist before communicating the situation by radio in order to coordinate support for himself and his fellow wounded Rangers. Staff Sergeant Petry’s extraordinary heroism and devotion to duty are in keeping with the highest traditions of military service, and reflect great credit upon himself, 75th Ranger Regiment, and the United States Army.

Reading that, it puts my stupid scratch into perspective!