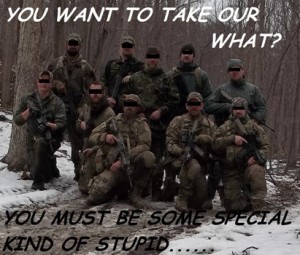 I participated in the Feb 1-2 CRCD class. This was my first time at MVT, and it was terrific. There have been a great many AARs written already by previous students that deal with the content of the class, and explain it well. Reading these AARs was instrumental in my decision to attend the class. I would encourage you to check the archives of the blog yourself if you want to know about content of the course, and instead of telling you what the course contains, I am going to tell you why you should spend your 400 bucks and 600 rounds at MVT instead of somewhere else.

Much of the current tactical training scene revolves around a few core skillsets: weapons manipulation, close range target acquisition and speed shooting, and CQB/dynamic entry style tactics and shooting.  This is not useless in and of itself, as I believe no one has ever been in a firefight and said “Darn, I wish I couldn’t manipulate this weapon as well as I can,” but this style of training is still a very incomplete picture of why I own weapons. I am not a cop, SWAT team member, or Navy SEAL, and never will be. As we discussed during a bit of down time this weekend, this kind of training has a very narrow philosophy of use (POU).

These classes, and more importantly the mindset that accompanies it, is frankly misdirected at the armed civilian. Students will learn to crouch, drive their rifle, and very speedily and efficiently stand by themselves on a firing line, shoot ten rounds in 2 seconds into a target that is 7 yards away and then perform a blazing fast magazine change, and if they are really tacticool, they can flip their rifle over their shoulder and pull out their GLOCK brand GLOCK and do the same thing again while walking slowly towards the 7 yard target. So you learn to shoot 1, maybe 2 targets to shreds from 7 yards away while standing/sticking your butt out in the open at breakneck speed, and look appropriately HSLD while doing it. Heck, you can even do the goon check when you’re done shooting. Big freaking whoop. Sells lots of DVDs, but doesn’t do jack for anything but a very few specific scenarios that a civilian wouldn’t find themselves in. Students walk away having taken several seconds off the time clock on a drill that involves lots of bullets at a stationary target, and feel good about themselves. They also basically wasted hundreds of dollars and even more hundreds of rounds of precious ammunition.

The founders never intended for this country to have a standing army. Ever. When we entered a state of war, the government would call up the unorganized militia to protect the people of the country. This of course assumes that the unorganized militia (all males 17-45/60, depending on who you talk to) have their own weapons, kit, and the ability to use them effectively in a military style. Back then it was standing in lines in fields, today it looks quite different but the philosophy is the same. An American who knows his history, and understands the founders’ frame of mind, needs to be able and willing to take up arms to protect the country. This means having weapons, ammunition, and the gear and fitness to get them to where they are useful in battle and having the skill to use them effectively. This, ladies and gentlemen, is not CQB dynamic squatting and gratuitous mag-dumping and transitions, this is light infantry tactics. Patriotic Americans who are students of history understand that having a nation of able bodied light infantrymen was the founders’ vision.

For whatever reason, a lot of people in the community are not cool with civilians being able to act as a cohesive small unit in a military fashion. This could be for several reasons, be it that they believe that is the government’s role (read a history book mate!) or only cops and the federal military should have that kind of ability. Some may be ignorant of history and believe that simple civilians who don’t get a government paycheck will never need to use military tactics in defense of themselves, family, or country. They make their living and gain notoriety by training civilians to be wannabe SWAT operators in the same classes as the SWAT operators, and just lump it all in together and call it good.

MVT’s CRCD is not a carbine class, and it is not a shooting class. It is a light infantry class. Be it a foreign invasion, periods of lawlessness or natural disaster, or whatever situation where you may need to protect people important to you, learn how the pros – military light infantry units – do it. Yes there is lots of shooting and carbines, but this is about putting it all together in SUT (small units tactics), and the CRCD is just the beginning. Teamwork: shooting, moving, and communicating, all at the same time. Bring a buddy or 3 or 7, and learn how to be a team and be useful when the SHTF and this country needs you. Your Magpul/Vickers Tactical/Insert Pantaeo Productions Trainer Here DVDs will still be there when you get back exhausted with all your kit and weapons covered in mud from learning how to use microcover, which you can’t learn how to do on a 25 yard gravel covered square range. If you are a militia member, prepper, or just an informed and armed citizen like me, get off your butt and train!