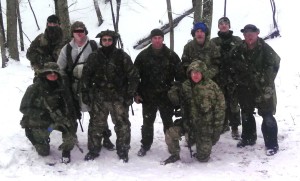 This was my 2nd trip to Max’s range.
All previous comments listed in my previous AAR still apply http://maxvelocitytactical.com/2013/11/aar-nov-910-2013-crcd-f-anon/

My previous review covers the tactical curriculum with some detail and for those mostly interested in a critique of the training content please see my previous AAR liked above.  I had some questions about gear in this weather (comments in THIS POST), so I will try to cover that in more depth here than I would have otherwise.

After I arrived in town I met up with my buddy at the Koolwink Motel and went to eat. Low and behold we ran into Max in the restaurant and had an enjoyable and stimulating conversation with him. It was a nice chance for us to chat with him a bit especially for my buddy who had never met him before. It would have been more but I totally overate the the Italian restaurant because I was hungry and the food was great and plentiful. This would later turn out to be  a real detriment as I didnt feel too hot after so much food and took until 1 or 2 to fall asleep.

But in the morning I had no problem getting up since I was excited to get started. : )

I wore a bit of  a jerry rigged setup:

– A Army issue type MOLLE vest , which worked great, comfortable and well balanced
– Basic military boots which had not been treated for waterproofing and predictably got very cold and wet.
– 5.11 pants with long johns under them which worked well except got wet.
– I had bought a British surplus over-whites set but the vinyl pants were so slippery I knew the knee pads would just slip off so I skipped them (they later slipped anyway). But i wore the over-whites top
– Under the over-whites top I wore a US military fleece jacket which despite its thinness provided decent warmth when paired with a regular t shirt and a long sleeve t shirt.
– I had some raingear pants at home which I did not bring as I had decided to dress as light as possible with this weather and not freeze in the interest of mobility. I was willing to accept the risk of wet pants from lieing in the snow during the prone.. Everything is a trade-off.

Despite my gear being no where near perfect I accomplished my goal of not freezing while not limiting my mobility with excess clothes.

There was a bit of a minor snow storm the night before class in the WV mountains.

As I had feared the night before …on the morning of Saturday our little convoy had some problems getting up the trail…. the cliff notes version is, that after some wheel spinning and a little time wasting we cross-loaded ourselves into the most capable 4×4’s and finally made it to the assembly area from whence Max took us up to the training area in the Ranger ATV.

Sitting in those chairs for max’s Tactics white board presentation BTW got chilly real quick but I wrapped myself into a nice comfy poncho liner and that helped a lot. Others also had blankets or in many cases simply wore warmer clothes.

My Army/USMC issue type knee pads were a bit of a disappointment to me. They kept falling down on my leg after a couple of dashes into cover. I think the fact I had to dash into snow getting them wet didnt help the friction of the straps and thats why they came loose so easily.

My electronic earmuffs were fantastic, even though they were cheap..one side stopped working halfway thru day one as the water from the snow seemed to damage it but it partially came back on day 2…the batteries were getting weak by the end of day 2 but they still worked enough yo be useful. In a training environment where you must protect your ears but still hear your instructors these simply where a godsend and I think made me a better student.

On gear: Both myself and my buddy found that you can jerryrig a practical set-up from different surplus layers w/o spending high dollars. Were we a little less comfortable in this weather than those with high end gortex hunting boots/jackets? Yes… but it was very manageable, didn’t present any real problems and did not impact our performance..

Speaking of the weather. It was simply a gorgeous winter wonderland!! The pics don’t do it justice… real thick snowflakes were coming down during most of day one making our targets snowy and harder to see.. realistic just how I like it .

The Day 1 lanes were also noticeably improved from my previous attendance which had been a mere month before.

Another gear related positive was that my SIG 516 which had never shot TulAmmo worked just fine with  it…Ihad felt that I incurred some risk to bring a rifle/ammo combination I had never tried prior to this trip… so I had a spare halfcase of M193 and a spare rifle to make sure I could  run a gun on the course,.. but it turns out they were not needed. : )

The Snow added a lot of adventure to our lanes exercises as well as an atmosphere that was not just cold but a bit surreal. It was also a lot easier to fall , especially when you tried to sprint combat speed between positions, this I tried in the beginning but after my first 2 falls I stopped ;)

We had promised Max that we would meet  a little early and crossload into the most winter competent vehicles right away and this we did on Sunday morning, which made our drive to the assembly area as speedy, as it was uneventful.

On Sunday we went through Lane 2 for the more advanced/demanding training, and started with the “Jungle Walk”, ahem I mean the “Arctic Walk”. This lane which we used for individual, buddy pair, fireteam and finally squad level drills went up a looong hill. So by the time you got to react to your pop up targets your blood was pumping and your breath was very labored no matter what shape you were in.

One of the small but best features of Max’s training as compared to mainstream military training is , that he will brief you a realistic scenario which will inform how you react and he explained WHY in this situation you would use “break contact drill” vs ” assault” etc etc.
When many many years ago I received Infantry training as private it was like “Ok guys we will now practice bounding overwatch” and we would do it but I could not have explained why as compared to a wedge formation etc.

Max realizes, that unlike an Army/UCMC private who (hopefully) will have skilled Platoon Sergeants and Platoon Leaders make his tactical decisions for him, a SHTF armed civilian needs to make all his own tactical calls at the fireteam level and below.

So he makes sure students understand what drill to use in which kind of Patrol etc.. People play lipservice to  ‘METT-TC” but not everyone fully understands what it really means… and Max makes weaves this principle into his training to ensure his students understand the why and when of a given drill so they use the correct situationally driven response when the situation arises.