Your Training Plan: Recommendations on Progression 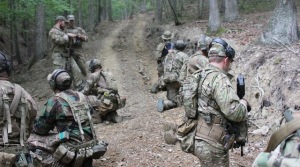 My observations of the ‘prepper/liberty’ movement tell me that in many cases there is a reality gap between intent and capability. This is often compounded by the age factor. In this post I am going to talk about training progression. I will use training that we offer at MVT as examples, but ultimately it doesn’t matter where you get your tactical training, so long as it is professionally and effectively delivered. If you get poor training, you will develop bad habits and training scars, so make sure you get quality training.

Whether you consider yourself part of the III%, or simply want to be able to defend your family group in a disaster situation, you need to bridge the gap between intent and capability.

The first part is physical training. Culturally as a country we are unfit and overweight. You may not even realize that until you take a wake up call and a long look in the mirror. If the cap fits, wear it. Effective tactical ability relies on physical fitness. If you start to mentally push back after reading those words, you are engaged in self-delusion and justification of poor physical fitness. This leads to the ‘retreat sniper’ mindset that I have so often commented on. Good physical fitness will help you avoid fatigue and physical/mental exhaustion when faced with a crisis situation. So, you need to start tactical fitness training.

In terms of tactical training itself, this is not all going to magically come together for you in a crisis. You will not rise to the occasion. You will fall to whatever level of training you have, compounded by physical and mental exhaustion, plus the stress of the crisis. Adrenalin may get you through in the short term, but over time it will add to your exhaustion. Remember that in a crisis or collapse situation you will also be dealing with a lot of unaccustomed physical labor, such as fetching water, or pulling it up when your well pump no longer works, or similar activities. Carrying buckets of crap out to dump….this is why, as I have frequently mentioned, your physical training should not just be ‘PT’ but should also include physical labor type tasks. Get used to using a pick and shovel, that sort of thing.

This is often misinterpreted, and does not mean that all you need to do is farm labor tasks. You need to DO BOTH. Tactical fitness training and physical work. It’s good for the soul and builds character.

The other thing that builds both character and team, is to engage in ‘character building’ activities, such as doing hard training together. This can be going out hiking, or tactical training, or going out on a sailboat, whatever. This is one of the aims of culmination-style training to specific standards, such as with the MVT Rifleman Challenge. It’s designed as a gut check and an achievement. Remember that as a III%’er or a prepper, no-one is training you unless you get off your butt and get it done. This is not the military; as a member of the unorganized militia you are responsible for your own training. There are resources where you can get training comparable to or better than light infantry training in the military – MVT is one of them.

Just look at the Student Reviews and read the comments from combat veterans concerning the level of training offered.

Now that we are working on our tactical fitness, we need to get the tactical training squared away. Training is a progression. Crawl – Walk – Run.

In designing the MVT Rifleman Challenge, the intent was to specify a series of tasks, to set standards, that if achieved would let you know that you had reached  a real training standard. It is still my hope that other trainers will get on board with the same, or similar standards. MVT is running the first Challenge 27-29 March, and will be awarding MVT Rifleman patches to successful students. Remember, this isn’t about MVT. You can come and get the MVT Rifleman patch, or get one by another school. It doesn’t really matter, because so long as the standards are similar enough, you are making yourself tactically effective by achieving them. What this is really about is raising standards across the III% armed civilian community.

The tasks/standards are laid out in detail on the MVT Rifleman Challenge page, and can be used as a basis for your training. They are based around the need to ‘Shoot – Move – Communicate.’

What this means is that you should take a number of tasks and train them as strands to your overall readiness. They will all come together to make you an effective fighter. This would include, for example, such skills as:

If we focus on the SUT, this is where we can really see the need for a training progression. SUT is intertwined with shooting and starts as a progression at an individual level, moves up and through team, and then will develop into leadership as you learn to lead your own team.  You progression should look like this:

And don’t forget that all these skills are perishable. They are not once in a lifetime training events. This useful student review from December’s Combat Team Tactics class discusses this.

This type of quality training progression has a lot of benefits that you may not even realize, many of them in the ‘mindset-psychological’ realm.

1) Operant conditioning: to give you immediate action responses to blow through potential freeze responses and allow you to regain initiative by short-circuiting the OODA loop.

2) Drills and reactions to continue to counter potential freeze responses.

3) At a very basic level, an understanding of HOW and WHY to react to tactical situations, rather than freezing due to uncertainty. Confidence.

4) Immediate action drills that you can train with your team/group to again blow through potential freeze reactions and move positively onto a reaction to contact.

The danger in our shooting culture is that this progression either gets skipped, or goes off in a random direction, or gets stopped. You only need to look at the bogus offerings on YouTube to see this.  There are many reasons for this – one being that “civilians don’t need to know this stuff.” Well you know that you do, because you and your team are the only ones capable  and responsible for keeping your family/tribe alive when the SHTF. It is your right to self-defense, and you don’t need permission from anyone to allow you to participate in tactical training.

The other problem is that is devolves into square range only ‘cool-guy’ tacticool stuff. Why? Because it’s easy and it’s cool.

At MVT we don’t offer fundamentals classes, but they are easy to come by. We do offer a training progression:

See you at the Rifleman Challenge!