Why you need the Combat Patrol Class

The Combat Patrol (CP) Class has been through a couple of adjustments to the current 4 day format. I’m very excited with the current format of this class.

I am often asked about the best order to take classes in. Combat Team Tactics (CTT) is in effect ‘basic training’ and will set you up for the more advanced classes. It is a prerequisite to Combat Patrol, and also a class that can be repeated many times for maximum training benefit. Force on Force Team Tactics (FoFTT) is an excellent learning class, and has no prerequisite, but a wise man would attend both CTT and CP before showing up.

Why is this? Combat Team Tactics will teach you the basics of weapon operation and fire and movement. It will get you operating as part of a team. But beyond that, it lacks a certain context. This is where Combat Patrol comes in, to revise and build on this skills learned at CTT, build patrolling skills, and put it all together with activities such as patrol movement, reconnaissance, ambush and raid. If you are concerned about uncertain times, and facing armed threats to your home and neighborhood, these are the techniques that you need to know. Even for a security patrol, you need to know how to move, how to observe, how to implement security, how to throw in a hasty ambush or react to enemy contact or enemy pre-seen. Combat Patrol gives you the Tactics, Technique and Procedures that you can take away and implement into your own team SOP’s.

So my advice on the best way to approach the offered classes is to attend CTT, once or maybe a couple of times. It never gets old. Then attend Combat Patrol. Once you have those techniques down, it is time to attend Force on Force training, rolling out some of the TTP’s learned on CP to defeat the enemy.

There is space available on the Combat Patrol (CP) Class October 13-16 2016. This is an excellent class that builds directly on Combat Team Tactics (CTT) and focuses on learning rather than simply being  ‘hard core.’ There are no nasty surprises at the class. It runs in a similar way to CTT, with learning and rehearsals taking place in the schoolhouse, followed by the practical training. The overnight patrol base is a learning exercise.

I have previously mentioned that I am writing the MVT Tactical Handbook. The intent of this book is to be an alternative to the Ranger Handbook for armed citizens, and also to include the training that we do at MVT, including CTT and CP. It will therefore be a very useful field guide for both training and operations, a different product from the manual ‘Contact!’ It will be both a distillation and a different product to ‘Contact!’ For the Octobert 13-16 Combat Patrol class, I am offering this as a complimentary item. Even if I am delayed in getting the book published, I will still owe you and send you a copy as soon as it is. Idealy, I will be able to hand you a copy at class, in lieu of notes.

Here is a student review of the updated 4 day CP Class.

This is a four day class which moves beyond the basics of the Combat Team Tactics (CTT) class, covering essential unconventional warfare tactics, techniques and procedures. It will give you the knowledge and training that you will need to not only defend your home base, but also to know what techniques hostile forces may use against you. Topics include:

It is a requirement to have attended Combat Team Tactics (CTT) prior to Combat Patrol. This class will involve living in the field (one night), tactical movement, actions on contact including break contact drills, ambush, raid and reconnaissance patrols.

Classes are open to prior CTT students only. Priced at $650 per person for the four days. There will be a requirement for one night in the field, in a patrol base / bivouac learning environment. Gear and patrol pack/ruck will be required for the patrol base operation. This will be a practical patrolling and live firing course. 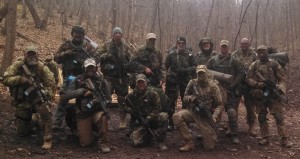