For those who read the blog regularly and in particularly  those who have attended training, you will realize that MVT has really started dialing down on student’s weapon manipulation skills. We mainly went there because of observing training feedback and improving on how to give students best value. You don’t get best value out of a tactics class if your head is in your weapon all the time. That is why we now offer Combat Rifle Manipulation (CRM) and we have also added a day to CRCD to make it a 3 day class.

Of course part of this dynamic is due to students being over confident in their own weapon handling skills. It’s not your fault. You thought you were fine at it on the square range/bench, but you have never run a tactics class before, and you have never been under stress while doing it. You don’t know what you don’t know. That is what MVT is here for. I have lost count of the number of students who have 1) been very grateful to have been run through RMP and 2) been amazed at what they did not know about dealing with weapon manipulation out in the wild.

The reason I put this post up is because I have had various anecdotes come in to me from around the interwebz about weapon malfunction drills. It appears that the tacticool schools like to sneakily read this blog and then adopt what they think is being taught. Funny. It seems they have started with what they know best, which is square range weapon manipulation drills. That is great, because my intent is to actually revolutionize the tactical training industry so that students actually get taught right. I want to force the tacticool schools to adapt to real training or close their doors – tacticool BS services will no longer be in demand! Just beware when they start teaching ‘tactics’ – they may not have the background or facility to do so correctly. Due diligence will be needed by you as the student.

The bolt override clearance drill is not something you hear of much. We teach it at MVT. We teach it so that it can be cleared rapidly without the use of tools. I posted about it in this post and described how to do it: ‘Rifle Stoppage Drills‘ – but of course even that post does not really help you unless you are correctly instructed on the range.

So the amusement comes when everyone appears to be now doing bolt override clearance drills! But the thing is, the anecdotes I receive show them being done wrong. I had one about a weapon being mortared to clear a bolt override, resulting in the breakage of the butt stock. And then their is this, I don’t know from where (photo was sent to me): 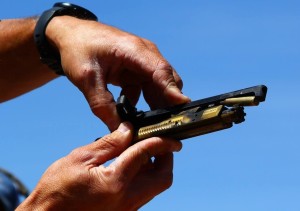 Which shows what appears to be a blank round the wrong way round for a bolt override!

So it appears people want to copy stuff but without really knowing what they are doing with it.

Which makes me realize that even though I can post a description of these drills on the site (and I will copy them below) it does not mean that you as students will be able to read, understand and conduct the drills. There is no substitute for getting the training straight up from the source. Get the training the right way at MVT, then go away and practice. You will be taught these drills as part of RMP on the new first day of CRCD. You will get them in more depth on the CRM class. CRM should be considered as a preliminary to CRCD, or even additional training if you have already done CRCD. CRM did not take off as much as it should have done initially, with half full classes running, mainly because people don’t know they need it, and how much it would benefit them. Everyone wants to do CRCD, but your CRCD experience will benefit from a previous attendance at CRM.

Here is a good recent review on CRM.

Assume a right handed firer. The support hand is therefore the left hand. The right hand will be on the pistol grip and operating the trigger. You should be primarily reloading and clearing stoppages with your left hand. Pouches should be set up so that magazine/dump pouches are accessible with the left hand for rapid reloading.

The intent with a stoppage drill is to get the weapon back into the fight as rapidly as possible (note the safety is not applied):

Common First Step: If you are firing your weapon and it fails to fire, immediately cant it slightly to the left so you can observe the ejection port. As you do this, ensure you take better cover. You will then act as a result of what you see:

NOTE: The priority of the speed/emergency reload is to get the weapon back in the fight. Magazine retention is secondary. If you have the time after an emergency reload, you can pick up your empty magazine. Due to the effects of stress it is better to learn one way to perform the emergency/speed reload and if you have time and presence of mind you can conduct a tactical reload.

If you are doing this in a pause in the battle, ensure you maintain security/observation. Take turns to do this. You may also take the opportunity to ‘bump’ your magazine load up and refill your ready pouches with fresh magazines. The reason you bring the full magazine to the weapon before you remove the partial mag, is that if you do it the other way round, and you come under contact, you only have one round in the chamber and no magazine fitted. You will also lose the advantage of the bolt lock when you fire that one round.

Writing these drills here is not sufficient for you to fully understand them and the detail. This does not suffice for good instruction.

Also, consider these drills as the 95% solution. This does not cover ammunition failures that may require actions such as rodding out a spent round from the chamber, etc. Ammunition failure is separate from the standard 5 stoppages that can be cleared rapidly to get the weapon back in the fight.

Also, the invariable question: what if its dark? The answer is simple – if you cant the weapon to observe, and it is so dark you can see nothing, then simply perform a tap rack bang immediate action drill. This will clear 3 of the 5 stoppages (not double feed or bolt override, and you also may have an empty magazine, requiring a speed reload) . If it was not one of those 3 stoppages, your charging handle will tell you everything you need to know when you do the rack part of the drill. For any more detail, come on a class and it will be demonstrated/explained/practiced. The written work only goes so far.