We have run some beta testing of the MVT Rifleman Challenge shooting and 2-Miler standards. This weekend Aaron is running the first Combat 2 Gun (C2G) class at the Velocity Training Center (VTC) and we ran the students through the shoot. Three of them volunteered to run the 2-Miler at the VTC beforehand which also gave me some good data – and they also had a blast! I also ran the course again and this is all building up good data on how to set the pass times for this specific course. The 2-Miler course at the VTC is hard (hills) and will be scored accordingly.

A reminder: the Rifleman Patches are not given out based on the 2-Miler time or shoot score alone. You have to pass all the events to earn the patch.

2nd Reminder: many of the events will have periods of instruction, or otherwise rehearsals and safety briefs ahead of time. You are supposed to have trained but do not need to be completely ‘plug & play’ on arrival – the MVT Rifleman Challenge is not just a test, it is training to standard, and will also include bonus training events that we do not do on other classes, such as ‘enter and clear a room’ (CQB).

Because this may be a little daunting for some, as a policy you will be allowed to fail one event, but retake it during the weekend. We at MVT want you to pass, but we are not going to lower standards to make that happen – we want to help you reach those standards. For example if you fail the shoot, you can go round again and re-shoot it (disclaimer- time/light availability dependent). Also, if you do not achieve the standard on any event, you will still train for the duration of the weekend and get the training benefit. There will be discounts for second attempts!

Here is a the MVT Rifleman Challenge main page, which I will also be updating. Here is a post I wrote about the shooting standard.

Previously I had published that there would be two patches awarded for successful competition of all the events in the challenge but that your time on the 2-Miler tactical fitness test would determine if you received a ‘Rifleman’ (sub-25 minutes) patch or a ‘Rifleman Reserve’ (sub-30 minutes) patch. (Note these times are for the 2-Miler run at the VTC, adjusted for the difficulty of the course).

This is going to change. There will be a ‘Rifleman’ patch awarded for successful completion of the challenge. The pass standard on the 2-Miler will be 28 minutes.

For successful completion of the challenge events, and achieving a time of sub-23 minutes on the 2-Miler, you will in addition be awarded a ‘Vanguard‘ patch. This patch can be worn with or instead of the ‘Rifleman’ patch and recognizes the achievement of an excellent standard of tactical fitness. It recognizes that you have the physical ability to be first to the fight. This is the gold standard of the MVT Rifleman Challenge.

(patch on the way)

It’s not good enough to just be fit – you have to be able to shoot, navigate and perform the other tasks as laid down.

On the shoot, we first beta tested it using the center rings on the Ivan target as the scoring zone. It turned out to be too hard! Remember, this is shot after running the 2-Miler, something that some are not taking into consideration. This weekend, we beta tested it using the U.S. Army reflexive fire target, with the inner white zone being the scoring zone. We are most likely to use these targets on the day. There are a total of 60 shots fired, 50 rifle and 10 handgun. Right now, the pass standard will be 48 hits in the white zone. There will also be some changes to the specifics of the event, as laid out below: 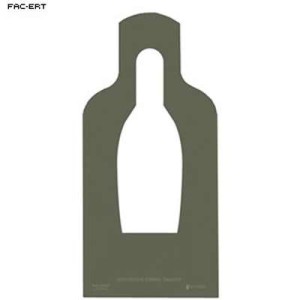 Pass marksmanship standards on rifle and handgun.Course of Fire:

Total time from start of run: 40 seconds including magazine change.

Ready up standing controlled pairs x 5 on command from 25 to 10 yards.

Pass: 48 hits in the scoring zone.