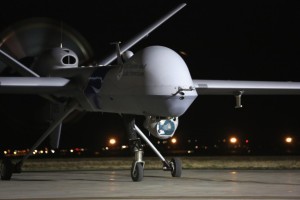 Before I launch into this post, let;’s just keep one thing in the forefront of our minds: THIS IS NOT THE ALL -SEEING EYE OF MORDOR.

Comments of the ‘we’re all gonna die, why bother, give up hope all ye who enter here” type will simply be deleted.

Previously I have concentrated on the avoidance of aerial thermal (FLIR) surveillance. It has come to my attention that there is now at least one VADER equipped UAV drone operating on the US southern border with Mexico, tracking the crossing of illegals. Now, remember, below it will be explained that this can fly at 25,000’ and track an area of approx. 35 square miles. Cool. How big is America? Think about it.

After a little explanation on open source technology, we will briefly look at counter measures:

The system operates in two modes: as a synthetic aperture radar for high-resolution still images, and as a real-time ground moving target indicator for detecting and tracking moving targets-particularly moving vehicles and humans on foot. The overall idea of the VADER system is to detect teams planting improvised explosive devices (IEDs) to destroy or damage U.S. military vehicles and personnel. VADER also has been demonstrated to track animals and boats.

The VADER’s ground moving target indicators detect the Doppler shift that moving objects produce in radar return signals, Northrop Grumman officials say. Doppler shift is a change in the frequency of the radar return caused by the motion of the target. Because there is no shift caused by stationary objects, the shift reveals moving objects. VADER transmits processed signals from the aircraft to ground stations, where operators can view still, high-contrast, black-and-white synthetic aperture radar images, or moving targets displayed as dots on a map.”

The newly-released records reveal other surprising facts, including that CBP was using its sophisticated VADER surveillance system much more frequently than previously thought and was using it for other agencies. This sensor, also known as Vehicle and Dismount Exploitation Radar, was initially developed for use in the Afghanistan War and can detect the presence of people from as high as 25,000 feet. CBP has used this sensor in its surveillance operations since 2011 and used it at least 30 times for other agencies in 2012.

Now, a couple of things about VADER:

1. It is only going to track you when you are moving.

2. A main counter measure to personnel/vehicle tracking is to be in a busy area, to clutter it up.

3. If you are in the boonies, going static will prevent tracking.

4. Measures used to prevent FLIR thermal tracking will work. Terrain and vegetation masking will work. Going static under such with a thermal poncho over you will prevent tracking. VADER, in my understanding, is designed to work in more open areas, which is why it works so well in Afghanistan and the south west deserts. Getting behind terrain and under tree canopy is going to help. So, the usual counter measures for avoiding drone tracking will work.

5. You are not going to know if this thing is over you, unless you have surveillance on where they launch it from (clue). But it can’t be everywhere, even if they get a bunch more. It will likely be used to cover names areas of interest (NAI), so avoid those (clue – don’t operate in the same areas, or near your home area).

6. Final clue – if these are being used against you by enemies foreign or domestic, then hit where they are flown from, maintained, supplied, and the trailers where the ‘pilots’ sit, and the accommodation where they live.

For those operating in the boonies and under tree canopy, this is more worrying: FORESTER:

FORESTER is an airborne radar system that provides stand-off, persistent, wide-area FOPEN surveillance, detection and tracking of people and vehicles.

Objective:
U.S. Forces want to deny enemies the ability to conceal their location and movements under foliage or during darkness and adverse weather conditions. A stand-off capability is needed to persistently scan large wooded areas for potential threats to provide actionable user ntelligence
for military operations.
Solution:
The Foliage Penetration (FOPEN) Reconnaissance, Surveillance, Tracking and Engagement Radar, or FORESTER, is an airborne radar system that provides stand-off, persistent, wide-area surveillance for situational awareness of foliage covered areas. With real-time onboard processing, the ground moving target indicator (GMTI) radar uses ultra-high frequency (UHF) to penetrate double canopy foliage to detect people and vehicles. It then sends the surveillance data to a ground station via a data link for tracking, target exploitation, and report generation. From 15,000 ft (~5 km), FORESTER has an area coverage of 90 mi2 (145 km2 ) and a maximum range of ~9 mi (15 km) to detect people under foliage. It provides continuous coverage over a 90-degree sector and has mechanical and electronic antenna steering to cover all 360 degrees.

FORESTER installs on a helicopter, which is able to maintain near-zero ground speed, enabling the radar to detect very slow-moving low radar
cross-section targets such as troops on the ground. It has been successfully tested on the A160 Hummingbird unmanned aircraft system
and Black Hawk helicopter. FORESTER has also been considered for installation on the U.S Army’s Long Endurance Multi-intelligence
Vehicle (LEMV).

The FORESTER system was designed and developed by SRC through the sponsorship of the Defense Advanced Research Projects
Agency, the U.S. Army, and the U.S. Special Operations Command.

Enhanced data-processing tools are being developed by SRC under DARPA’s FOPEN GMTI Radar Exploitation and Planning program, also
known as FOPEN-GXP. These tools will exploit FORESTER data to discriminate and characterize human activity under foliage in order to assist in the development of actionable intelligence.

And the latest version of FORESTER: TRACER:

The United States Army tactical reconnaissance and counter-concealment-enabled radar – TRACER is a mid-range, long wavelength synthetic aperture radar (SAR) system that provides all-weather persistent surveillance developed by the United States Army Communications-Electronics Research, Development and Engineering Center’s Intelligence and Information Warfare Directorate. The TRACERprogram began in April 2007 and has been integrated onto a C-12 Huron. In the fall of 2010, it is planned to test TRACER on NASA’s unmanned Predator-B IKHANA, and later on Air Warrior.

Due to its decreased size, weight and power consumption compared to the predecessor foliage-penetrating radar program, or FOPEN which has been in the field since the late-90s, TRACER operates on manned and unmanned platforms and produces images on board in less than five minutes. As a follow-on to FOPEN, the TRACER system can be tailored to specific missions by providing a variety of SAR images including strip maps and spotlight and circle images.

Combining systems for the future:

The ability to detect and track dismounted personnel is in great demand, Kuderna says. His division is working with the Joint Improvised Explosive Device Defeat Organization (JIEDDO) and the Defense Advanced Research Projects Agency (DARPA) on the Foliage Penetration Reconnaissance, Surveillance, Tracking and Engagement Radar (FORESTER) program, which aims to develop a low-frequency radar to track dismounted personnel under foliage and other complex environments in which adversaries normally would be concealed.

Another joint program with DARPA and JIEDDO is the Vehicle and Dismount Exploitation Radar program, or VADER. It aims to accomplish the same goal as FORESTER but in an open environment. Both programs face similar challenges such as target discrimination, data identification and false-alarm rejection, Kuderna allows.

The Artemis program seeks to combine the SAR and GMTI foliage penetrating capabilities of FORESTER in a single sensor. Engineers are eying the Fire Scout as the objective platform, so the challenge is to combine two 500-pound sensors into a single sensor that weighs 250 pounds.

In higher frequencies, the STARLite radar already is in production for placement on the Army’s extended range multipurpose MQ-1C Sky Warrior unmanned aerial vehicle (UAV). Another radar under development for that UAV is Tracer, a low-frequency SAR foliage penetration radar that currently is undergoing engineering flight tests. Its next phase will involve flight on an unmanned platform, and NASA’s Ikhana Predator-B type UAV will serve that role.

So, the bottom line is that technology is changing and advancing. How long before TRACER/VADER combined capability UAV drones are flying in the US? How long before more are purchased to increase the potential coverage area?

As this surveillance technology advances (for your safety and security) the nails of tyranny are being hammered into the coffin of Liberty. A wary eye should be kept on development in this technology. At this time, if free Americans suddenly had to face a threat from enemies foreign or domestic owning such capabilities, it would be manageable. My advice: keep an eye on where these devices are being operated from.