I recently posted about ‘Normalcy Bias‘ and put a copy of the post up on the MVT Forum. As usual, Diz hit the nail on the head with a comment:

I’ve been thinking about this all morning. I really think you need to make the distinction between “conventional” crime or violence, and “unconventional” crime or violence. Because when we’re discussing these things it’s almost as if we’re talking about two different subjects. The guy’s whose main focus is “conventional” crime, i.e. street crime, view the threat as purely conventional, garden variety, every day violence. From this point of view, responding to violence with impact, edged weapons or handguns is probably the optimum choice. And the stats are certainly there, saying if you do use a handgun, you probably won’t need more than one mag.

On the other hand, there is the guy whose main focus is on the “unconventional” violence, which stems from the deteriorating political/economic situation, who views the threat as something beyond “conventional” crime, getting into the civil unrest, terrorism, and insurgency.

So when these two guys are posting about being prepared to meet violence, they’re really talking about two different kinds or levels of conflict. Hence the posting about chest rigs being unnecessary for actual self defense. From a conventional POV, that’s probably correct; if we’re talking about you being assaulted somehow on the street, then you will likely as not be fighting with EDC gear. BUT, if we’re talking from an unconventional POV, as in civil unrest, in Ferguson right now, or rioting/looting coming to your neighborhood, or even terrorist attacks, you may be looking at something akin to a running gun battle, which might closely resemble a firefight in Falujah. So to say that a rifle and chest rig, with at least 6 re-loads is not necessary is fracking retarded.

I guess the question I would be asking these guys is if they see a very low likelihood of using the rifle, and a chest rig to feed it, then why are you training with it? It would seem to me you’d be better off doing H2H and handgun training for your perceived real world application. If you do use a long gun, a shotgun would fit your application better than a battle rifle. This tells me these guys are just gaming it for a hobby. Why should we even be listening to them?

I believe that many if not most of these people do not believe it could ever get to this “unconventional Threat.”

From my point of view it is about living in denial!

Regardless of reasons I think we have to except the point that a large percentage will never believe that such training and gear will ever be necessary until they are confronted with such a situation.

So there we have it. 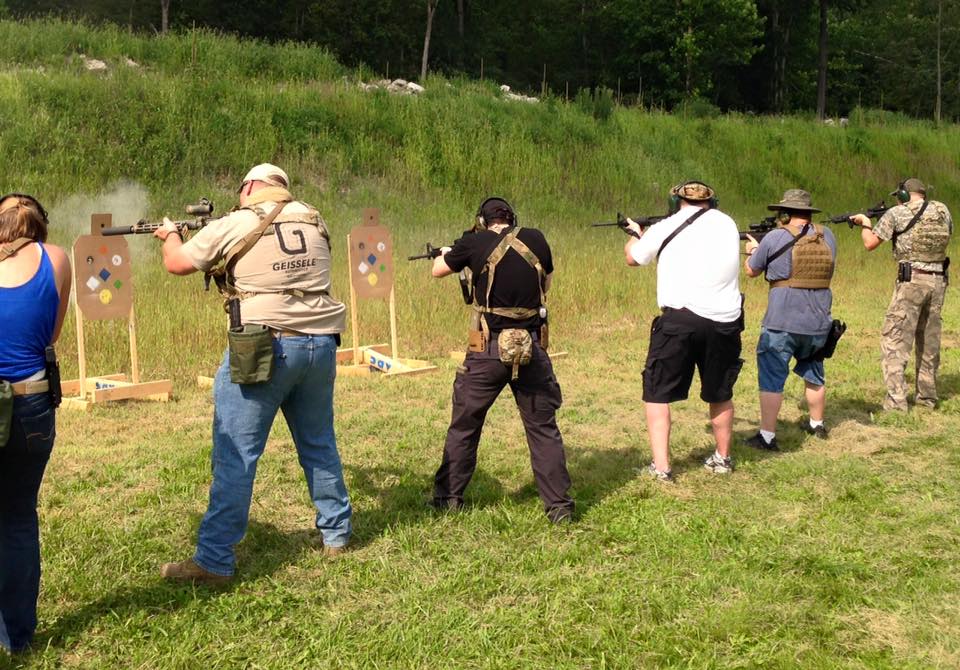 I think Diz hits the nail on the head. Much of the ‘tacticool’ style training is firmly rooted in Law Enforcement training, and much of the fan-boy stuff follows that route towards ‘SWAT-style’ CQB, and perhaps even goes as far as ‘SOF-Tier-1-style’ fan-boy training. That also has roots in ‘mil-sim-air-soft’ and is effectively the same thing: one is playing with air soft, the other slightly more serious with live rounds.

It is amusing that these types will talk about combat training, such as MVT, as ‘tactical band camp’ but really they themselves are just playing. Examples of this type of comment can be found in the ‘Normalcy Bias‘ post. It is the trainers of such students, who these students avidly follow, who will often state that they will not train civilians in basic tactics such as fire & movement “because civilians don’t need to know that.” How ironic. It is very prevalent – they will take your money for some sort of tacticool BS class, that can’t really be teaching you anything real, because they don’t believe you have a right to know the ‘real.’ Go figure….

MVT will teach what the others won’t teach you, because it’s “too dangerous” for civilians to know.  We go the extra mile to make our students truly dangerous to their enemies.  Gunfighters, not gun drivers. Simple.

Now, not all of this is BS. Some guys are doing serious close quarters and personal defense type training that has real application in self-defense situations in current times. Concealed handgun, hand to hand training and such are legitimate use of your training time. I have talked before about the need of such skills both now, and as the ‘gray collapse’ progresses. The problem appears to be when  these types don’t acknowledge the very real possibility of societal slide/collapse (watch the news?) and are stuck in a form of denial / normalcy bias. These are the types who sneer at those of us who are interested in being prepared for uncertain times, and thus wish to conduct real tactical training. I don’t know if it is possible to wake these types up. It seems impossible to wake up a lazy and apathetic nation, including many so-called ‘Patriots’ who refuse to even put down the cheeseburger, let alone do some PT, or combat training. Hard times are ahead kids!

Diz commented again on the blog:

I would like to address this chest rig thing because I have personally run into this many times.

Beyond normalcy bias I also find these younger generations are insufferably arrogant. For some reason, especially since the internet, any f**kwad can read about something and become an instant expert about it, online.

Everyone has an opinion, which they will tell you all about, regardless of where it’s coming from. Then you get a group of them together, that agree, like this guy’s website, and it becomes de-fault “truth” because they have reached some kind of consensus on it. Those that disagree are oftentimes chastised about it, until they change or go away.

It’s the “Wikipedia” effect, for lack of better words. If it’s in print, then it must be true, right?

Anyways, this kind of thinking was led by the big trainers of the day, like *********, *********, **********, **********, etc. who stated that the likelihood of mere “civilians” using a carbine was so miniscule, that hey, I’ll take your money, but you’re not ever gonna need this training. That was the actual sentiment pre-GWOT. Now some are slowly changing their tune. But this concept has always been around, and continues to be espoused by fellows like this ART website.

So yeah you get this whole, I got 30 rounds in this mag, what more do I need kind of thing. Which to me, is totally looking at things from the perspective of what went down before, and therefore what will “probably” happen in the future. Now there’s the rub. We are seeing such a wide spread between people’s estimate of the situation, that those on the lower end are poo-poo-ing those on the higher side.

Well fiddly-dee, fiddly-doo, I don’t have Mosby’s crystal ball either, but, I do think it’s foolish to base your planning entirely on what the “average” violent confrontation looked like, according to the feds.

You know, sometimes I think you have an apples to oranges comparison here. Are we confusing “common”, every day street crime, with “uncommon” street crime, as in the U-dub we may face? And are these folks in such denial that they cannot imagine it ever happening?

It would appear that we have a disconnect in this ‘tactical training’ world. We have a group that have been conditioned to sneer at those of us who wish to learn how to fight for real, conditioned and led by the big name trainers of the day. Why these guys are even armed with carbines at all I don’t know, other than to simply be fan-boys and girls, look good, and role play? This training is based solidly in law enforcement or pseudo-special ops, and civilians will be taught only as much as their trainer feels they have a right to know. That is even if you are allowed on such ‘advanced’ classes without a suitable LEO or Mil ID card. Don’t worry, if you get to be ‘on the inside’ they may tolerate your presence. Otherwise these civilians might get a little too dangerous, right?

The other side of this are those of us who consider it important to learn real tactical training in order to defend ourselves and our families in uncertain times ahead, to give ourselves a better chance of survival. You could say that those times are already here, given the news, the corruption and the lies at the highest levels. The thin veneer of civility, if any veneer at all, over the barbarian horde. After all, it is inevitable that these United States face a collapse of some sort. It is inevitable; all we are lacking is an exact timeline and means. Perhaps it is already here and we are just waiting for it to get sporty, after some sort of catalyst? Are we already in the ‘gray collapse’ but normalcy bias says it is all OK, because I can still get in my truck and got to McDonalds? When is the cyber-attack going to happen, or whatever it is? Go on, I wrote about it here, and that was before I knew that the Chinese for sure had all of the Secretary of State’s classified emails:

Although you do realize that you won’t have the training or organization to pull off anything like that described in the book, don’t you?

Anyway, this post was pointless. I am preaching to the converted. The tacticool fanboys won’t even read it, and if they do, they will just laugh and pass it off as tin-foil-hattery.

Last man standing gets the last laugh. That chest rig may come in handy, some time in the near future.