I am currently down in Texas for the Brady Combat Team Tactics / Mobility Class. 1500 miles and 26 hours of driving. I listened to the audio book of Colonel Grossman’s ‘On Combat’ on the way down. Well worth the listen.

It prompted me to write this post. It’s not something I have ever talked about before. It is about a crushing fear that I experienced when I was around 16 years old. I had never experienced real fear before. Nerves maybe. I was an active hiker and rock climber. I had experienced nerves, similar to that feeling in your gut when you realize the fight is about to start and you are the object. I had even sport parachuted. Nerves only, that’s it.

It was my ambition to join The Parachute Regiment (Paras). When I was 16 and still at school, I attended a selection course with the Paras. In simple terms, it was to be selected by them so they would sponsor me through the future process of becoming an officer in the Paras. The course was several days long and was held at the time in Aldershot, the old home of the Paras, and where P Company (Pre-Parachute Selection) used to be run. As well as the various leadership style tasks we had to do, we did several of the P Company tests. I was particularly enthused when as part of the activity, armed masked men burst into the classroom firing blanks, took us hostage, after which we ‘escaped’ and went on the run on the local training area, hunted by squads of Paratroopers! Anyway, I was extremely fit, and aced all the physical tests.

However, part of the selection was completing ‘the trainasium.’ This is an aerial confidence course that was designed by army psychologists. It has various aspects to it such as ‘the illusion jump’ and other joys. It is designed to induce fear and simulate reacting to commands when both parachuting and in combat. The way it works is when you get to a particular part of it, there will be an instructor, and he will tell you to go with “Standby, Go!” – if you fail to move, he will give the command a further two times, after which you are ‘binned.’ 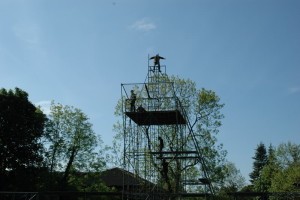 I am not sure how high the shuffle bars are, maybe 60 feet, but they are atop a tower reached by climbing up a scramble net. You get to a platform, about 15 foot above which are the shuffle bars themselves. You climb up a scaffolding ladder and stand on two scaffolding poles about shoulder width apart. There are two bars sticking up from the ladder behind you to hold on to. The shuffle bars themselves are maybe 12 feet long and at the other end there are two other poles to hold onto and a ladder to climb down to the platform. When you are up there, you are above treetop height and the platform is too tiny below you to really see it. It feels utterly exposed. About 2/3 of the way along each shuffle bar is a scaffolding joint. The idea is that you place your instep on each bar, arms out, and shuffle across, stepping over the two joints, bend down and touch your toes, and then reach the other side before climbing down. 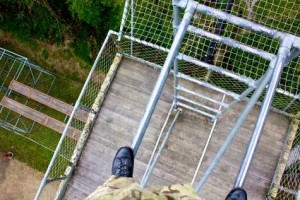 I was stood on the bars holding onto the two upright poles behind me. The instructor was below me on the platform, although oddly in my memory he was right there beside me. I had never felt anything like it before. Waves of vertigo and terror were washing over me. Part of it was the exposure, but I had also never walked across two scaffolding poles before. I simply could not think how I was to do it. It was impossible. I would surely fall?

However well I had done, I would fail if I did not make it across the shuffle bars. My ambition was to get into the Paras. To hell with it, if I fell, I fell.

I launched myself out onto the bars. Wobbled, nearly fell, struggled for balance, recovered. Made my way across.

That was real fear. You won’t know it till you experience it.

After I completed the trainasium, I knew that I would have to do it several times again in the future as I made my way towards a career as an officer with the Paras. I was terrified now that I would be too scared to do it. My main issue was the physical ability to shuffle across those two bars.

So I trained for it. I inoculated myself. When doing PT, I would find parallel bars, either in the gym or outside, and I would jump up and walk across them. It was easy when they were four feet off the ground! But the act of doing it gave me confidence so that I knew I could do it 60 feet up, and that the vertigo was the only thing making it harder.

Years later, I was a platoon commander instructor putting my recruits through P Company. I would jump up on the trainasium after the PTI had demonstrated the shuffle bars, and go across them myself. Just a few nerves, but it was important to lead by example, and never ask someone to do something you were not prepared to do yourself.

Inadvertently, I think that my facing my fear gave me the ability to face other fears. For example I remember being in Iraq, and sometimes getting nervous before a mission, thinking about others who had been killed or had their legs blown of by nightmares such as explosively formed penetrators (EFPs). But I would have little rituals, and compartments in my mind, and rationalizations (irratioanlizations). The weight and tightness of my gear and body armor about my torso would give me comfort. Whatever it takes to let you go out on the mission when you are getting hit most of the time in one way or another. Again.

At MVT classes, I talk about battle inoculation. Many of the things that I have mentioned above, such as controlling fear and the confidence given by repetition and achievement are present in training and combat. If you train and have the confidence to carry out, for example, a break contact drill, you know you can do it. That reduces freeze and fear. Operant conditioning will help you through it and get you moving off the X. Even the noise of a squad attack or a break contact drill on the MVT ranges will inoculate effectively so that you are used to the experience of all those weapons being fired around you. The real thing will seem less alien to you.

If you are defending your house after the collapse, and your family is in the basement, and enemy fire is ripping through the house, you have to have the confidence born of training to know you can make a difference and defend your family. You may die in the process, but that isn’t the point,. The point is that you are the defender of your family and you must do it. If you are frozen with fear, you need to take a deep breath, suck it up, and MOVE. Break the freeze, move out to the flank, and start laying waste. Do not let the fear freeze you.

You don’t know if or when the terror will come. But when it comes it will debilitate you. There may be a leader to move you through it, or you may have to do it yourself.

You may have been fine, but suddenly your position is targeted and rounds land all around you, cracking over and zipping and pinging off your micro-cover. Now its personal: they are trying to specifically kill you, and the terror erupts from inside you. Don’t let it. Only allow it to become nerves, and use the nerves to give you adrenalin.

Know that you are trained and  ready.

Get moving and kill them.

Trainasium from 5:49 in this video: