I received the following comment on my recent post ‘Field Sleeping Options – A Discussion‘:
“I own and use a FLIR device for hunting, I understand the idea behind blocking the hot spot from showing up on observation devices, but won’t the use of a thermal blocking tarp create a square “hole” in the natural thermal background pattern? By natural thermal pattern I mean the differences in heat signatures that show up due to rates of heat uptake and release.” Anonymous. 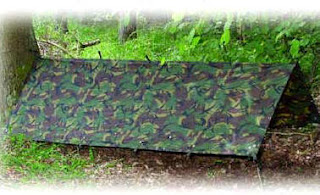 This is a good point and I will address it.
With the MVT Shield (Original Post HERE), we are at the end of field trials with the concept and are working on sourcing bulk amounts of the right camo tarp material to begin a construction run. When we begin to produce these items, each one will come with an instruction sheet to explain the best tactical use of the MVT Shield. I will explain some of these points here, which will also answer the question above:
The MVT Shield is not a ‘silver bullet’. It is designed primarily to provide static shelter from both the weather and from thermal surveillance. It is designed therefore as a practical ‘all in one’ tactical field shelter that will block the thermal signature of those sheltering beneath it. Initial use of the term ‘thermal poncho’ led some to confuse the meaning and think that it was to be worn on the body as a ‘poncho’, when in fact the term poncho comes from the military use of issued ponchos as rain tarps. Hence the more recent preferred use of the term ‘tarp’ and now ‘MVT Shield’, or thermal shield.
In extremis the MVT Shield can be pulled over you to provide immediate thermal shielding. It can also be used in the way an emergency blanket is used for survival. However, for longer term use, part of the concept of rigging it in a manner like a tactical rain shelter is to provide an air gap between the occupant(s) underneath it and the shield itself. This air gap enhances the thermal blocking properties in a way that a thermal blanket worn against the body does not – it will prevent any long term bleed of body heat that has the potential to form a non-specific thermal ‘bloom’ across the material of the shield. This ‘bloom’ was something noticed during testing before we hit on the right design for thermal blocking and ensured that the tarp is not held against the body for long periods of time.
In tests, the MVT Shield provides complete blocking of thermal emissions from occupants below it., This includes both blocking of any body shape and indeed blocking of any form of thermal ‘bloom’ or signature from those underneath. Thus, if rigged correctly to block the view of the observer, your thermal signature will not be seen.
You should still adopt good tactical procedures for avoiding surveillance whether that be thermal or non-thermal. This includes good use of terrain and vegetation masking (cover and concealment). Remember  the shield will only work in a static position when you are beneath it, and it will not work when patrolling or moving. So when moving ensure you use concealment techniques that in themselves will block observation of you by both thermal and non-thermal means. Given the choice, you should set up the shield in a location that is concealed by additional masking means, such as in a defile and/or covered by a tree canopy. All of these techniques will enhance your concealment.
Now remember, from my previous POST(s) on this subject, I have addressed the idea of the ‘thermal hole’. In fact, what is seen is not a thermal hole. The following is a detailed explanation on this:
When seeking to avoid detection by TI/FLIR, you are trying to fool the operator. This is discussed in previous posts. The temperature range of detection of thermal imaging devices is so fine that you will not hide even minute differences in temperature between yourself and the surroundings. However, as above, when under the shield you thermal signature is effectively blocked.
However, as per the question at the top of this post, you need to also consider fooling the operator from observation in the thermal spectrum. This is not as hard as it sounds and in fact the measures you use to enhance your concealment from optical surveillance will also work in the thermal spectrum. When an operator is looking through a FLIR device he will see a range of black and white colors representing relative heat values. He can either have black hot or white hot, or even have heat sources picked out and highlighted in red. Lets run with the ‘red hot’ version because that is the most threatening – the red highlights heat sources and body shapes to make them easier to define by the operator. Even a FLIR Scout handheld device offers this function.
(This is where we are actually fooling the machine, with the thermal blocking properties of the tarp, because with our thermal signature blocked, there is no heat source to allow the machine to define it in red. This will then allow us to fool the operator. Even if you make a mistake deploying the shield, and some part of you is visible, we hope to fool the operator because it will not look like a human shape, perhaps your foot sticking out or whatever, which will make no sense to an operator looking for the usual human forms).
A thermal tarp does not appear as a hole in the background. It simply has its own temperature and thus shape. Everything in the natural environment has this quality – this is why when you look through a FLIR you can still distinguish trees and other objects – everything has its own natural temperature. You can think about this in the same way that you can for a standard rain tarp – it may be camouflaged in color, but if it is rigged up in an obvious location you will see the unnatural rectangular shape. 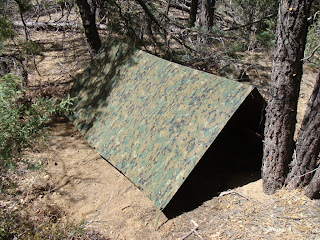 Lets think about the reasons that things are seen:
Shape, Shine, Shadow, Surface, Silhouette, Spacing, Aircraft, Movement, Thermal.
You have to worry about all of these things in the visual spectrum when you are under observation. This is what we do with normal camouflage. Specifically in the thermal spectrum you have to worry about Shape and Thermal signatures. We have already taken care of your thermal signature by using terrain/vegetation masking and sleeping under a thermal shield. Terrain and Thermal masking will also take care of the Shape problem, but if your thermal shield is visible to the operator with nothing masking it there is a danger that it will be seen simply by shape.
There are a couple of elements to this: first there is the shape of the tarp itself, which if not camouflaged will be seen as a certain shade of white in the thermal imager. It does not stand out because it is more white, or because it looks like a hole, but it simply may stand out because it is identified as an unnatural rectangular shape in a certain shade of white against the background.
So what is the answer to this? You already know it, and often employ this technique to camouflage yourself in the visual field. It is the ghillie concept, which was part of the original concept of the ‘thermal poncho’ that I laid out in ‘Patriot Dawn’ and ‘Contact!’:
You need to consider breaking up the unnatural shape outline of the thermal tarp. You can do this by setting it up in natural cover and concealment, you can cover it with vegetation such as branches or tree litter, and you can also add camouflage to the shield itself. We will not sell the MVT Shield with any ghillie effect added, simply because to try and please everyone, in multiple environments, will please none. The Shield will come as a quality constructed tarp in camouflage colors. It will, in its basic form, block your thermal signature. However, if rigged in the open there is a danger of a FLIR operator spotting the shape of it.
To counter this, you have the option of adding material to the topside of the Shield, perhaps gluing or otherwise attaching it or even just throwing a pre-rigged layer over the top: suggested materiel includes military style camouflage netting and burlap cut into ghillie style strips. You do not have to cover the whole of the shield in this materiel, just enough to break up the shape and in particular the outline of the edge of the rectangular shape. This action will have the effect of disguising and camouflaging the shape of the shield from both thermal and visual observation. 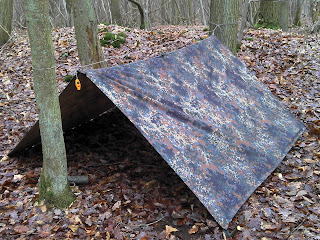