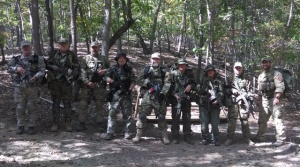 Reading Max Velocity Tactical can certainly give you some insight as what to expect during your training and I would encourage everyone to investigate all the AARs’ presented. They speak volumes to the truth of the experience. However, one must attend to gain a full appreciation for the journey that you will endue while here. Upon arrival, one is struck by the autumn colors, serene background, and the pure silence of the locale. Until of course, the training begins. Much has been said about the lack of flat land in the beautiful, woodsy hills of WV. The topography and the challenges it presents will be come immediately apparent once you set foot upon the terrain. You will be tested physically, make no mistake. I need to do more concerning PT, and this entire trip made that crystal.

Max, Aaron, Chris, and Fred are truly outstanding, exemplary professionals and exude confidence and professionalism that reinforces the participants resolve to perform at the highest level possible. They deserve it in view of their commitment to freedom and willingness to provide the necessary skill sets required for citizens to face the coming breakdown of society.

The TC3 class exceeded my expectations, and I am a seasoned health professional. Despite having worked in trauma centers, emergency rooms, those experiences are not in the field.
Having completed the class, I feel confident that I could provide life saving techniques learned here and transfer that knowledge out in the ‘real world’ as it were. I was particularly humbled by
the evacuation procedures for casualties. I had no fucking clue as to how difficult it is. I wish to emphasize the word “difficult”. And that was without being shot at.

CTT class is the new designation for the RMP class combined with the CR/CD class. Day one was learning all the basics of our rifle (everyone had an AR which helped), zeroing, speed and tactical reloads, weapons malfunctions and how to clear them. Aaron was our instructor. Bright, cheerful, loaded with information that he imparted to us most effectively. Oh, I almost forgot, Aaron can yell. No correction, YELL , like no one I have ever heard before. I think that ear pro would strain attempting to attenuate his volume down to just normal. 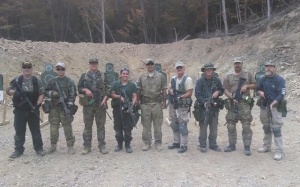 Days 2 and 3 concerned the contact drills noted in the book, “Contact”. First on individual level, buddy pairs, then groups of 4 and finally the squad level (8). All with live fire. Here was the essence of Max Velocity Tactical training, conducted by Max and Chris. I have had only one other experience on a ‘hot range’, and that was child’s play compared to what onewill be exposed to here. You quickly learn that this is serious business, and no room for error. As Chris would sometimes say, “big boy rules”. Safety here is of paramount importance and was continuously emphasized throughout the entire stay here, and rightfully so. Safety procedures learned here will endure for life. Any transgressions were immediately addressed by Max, and if need be, one of his infamous ‘bullockings’ would ensue. During some of the lull in training, Fred lectured us about CBRN on a variety of topics. His knowledge base is voluminous to say the least, and more importantly, his ability to breakdown complex ideas into information that was easily assimilated for the non technical audience.

Lastly, Combat Patrol, Night Patrol, and I suppose, our ‘graduation exercises’, contact with the enemy ( which included casualty evacuation), then ambush and a raid. All of which began just after breaking camp the early morning of day 6. If you wake up tired and cold, that early morning contact is akin to drinking 5 cups of espresso, and running a few miles. I really enjoyed the
night patrol led by Matt. He was all gung-ho on our initial jaunt up the slope and thankfully he slowed down a bit. Fortunately, as night encroached one must proceed more deliberately so as not to bumble through the forest like an bull in the china shop, giving away your position, or stepping off into a drop, or taking a branch in the eye. One learns to move almost predator like, testing the footing, looking about carefully utilizing your night vision abilities of the human eye. We played cat and mouse with Max driving about on the Ranger with his lights on, attempting to discern our location. Chris was down in the ‘enemy camp’ with NOD doing the same. Interestingly, even from atop the ridge, far down below we saw him using his cell phone with that characteristic blue/green glow. And that with the naked eye from afar. Light discipline is of paramount importance was the lesson. The other big rushes for me was being the ‘grenadier’ on one of the bunker assaults. Lots of close up rapid fire. Enough to bring a warmth to ones’ heart. Or, being on the fire support team for the raid on the enemy camp. Again, lots of rapid fire. I’m sure I saw a few smiles after that one. 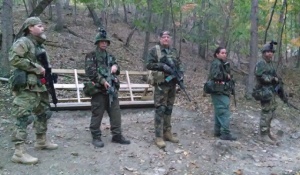 My takeaways from attending were that there is no substitute for real, professional training. It is a very reality based, visceral experience. While gear may be of importance, if you do not possess the ability to use it, sooner rather than later, you will not prevail. Another observation is that you must have a mindset for controlled violence, be ‘dialed in’ as Max would say. After one exercise, he admonished us not for the fact that the drill went “just ok”, but we lacked that killer instinct and crisp execution. We all received a dressing down by Max. Perhaps not all deserved it, but it was, as they say, group therapy. He was telling us in effect, we will be fighting for our lives and those of our loved ones, and if we don’t act accordingly, very bad things will happen. Max possesses an extensive vocabulary that will reach even the most thick of folks. And I must add, realized it just now, another prized component of his… patience. Almost Job like. I am sure we tested it several times and am thankful for it. I hope to return and perhaps accompanied by my wife, because as many have said previously, women need this type of training also.

Get the training that is not available anywhere else before it is too late. 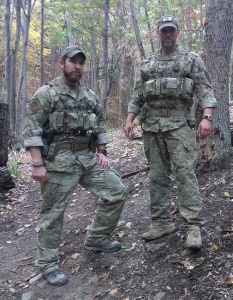