I took Max’s Combat Team Tactics (CTT) and Mobility classes in immediate succession. For context, I’m a 27 year-old woman with a familiarity with firearms and no regular exercise regimen.

Max has built an extremely intuitive system. Every part of the course was important for the following drills. I’ll give you the high-level summary of what these days looked like:

The first day of CTT was rifle drills. Even after that first day, I felt much more competent with my rifle than I ever have before. By the end of the week, reloading and dealing with stoppages had become far smoother and more reflexive. There was a lot of information to take in on day one; we learned the staples of safety and the basics of team communication.

Day two had even more information to absorb as we began learning fire and movement drills. This is where we began communicating with our buddies and acting together in pairs. We also began learning how to function in four-person teams in patrol and break-contact situations.

Day three was applying the previous drills in new, more complicated situations. For example, we ran drills where there were multiple contacts from different directions and drills where we worked with squads of eight people. Each scenario was designed to link the drills together in a realistic way, ensuring that we grasped the concepts and could act on them effectively.

The two days of Mobility class built on these drills even further, but in the context of travelling in vehicles. Hint: You might be in a car, but be prepared to run. A lot.

A pleasant surprise was how much the Mobility class challenged us to think critically and tactically. We were expected to apply what we’d learned so far and figure out how to handle the logistics of caravan scenarios. It was a serious wakeup call to watch the effects of my decisions play out in the field. Max introduced casualties to these drills wherein we would have injuries or fallen teammates to consider. Of course, my class had a rather high density of emergency medicine professionals, so they handled those like bosses. 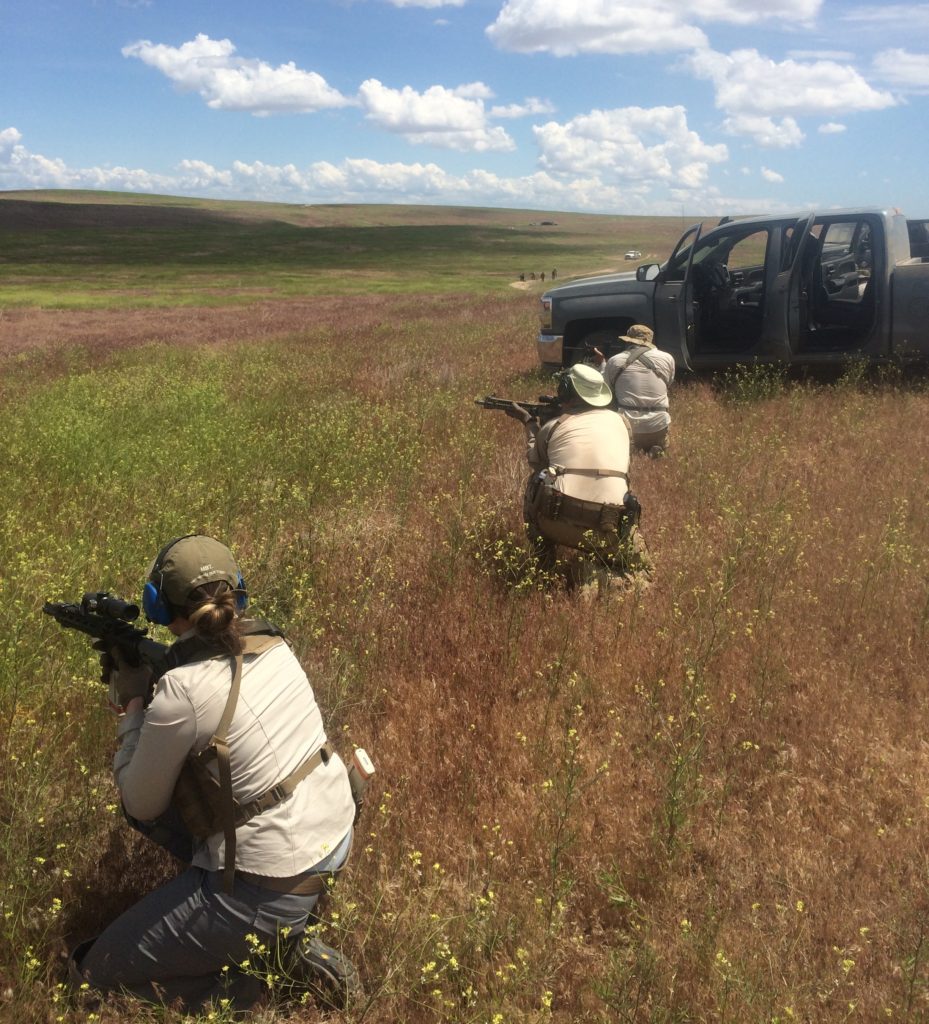 The most important thing I can tell you about this class is that it is built around teamwork. Max will teach you how to communicate– and you will realize very, very quickly that communication is what’s standing between you and getting your buddies killed.

I took this class with my family because my father (a lifelong competitive shooter) realized that all of the marksmanship in the world won’t help you in a bad situation if you’re not working with a team. Even if you’ve been handling firearms for decades, it’s a good bet that you’ve never had to fire in situations quite like these. After all, traditional marksmanship doesn’t require you to keep your head on a swivel or your ears perked for your buddy’s shouts.

By the end of the week, our entire class was in the habit of watching for our buddies, staying cognizant of safety angles, and communicating our movements in an orderly fashion. To be honest, it felt awesome. It was incredibly rewarding to work smoothly with a small team in high-adrenaline situations.

My buddy was my brother-in-law and we both quickly embraced the importance of talking back and forth, each trusting the other to provide cover fire as we moved. That, in and of itself, was fun to accomplish. But it was also somewhat terrifying. One slip-up and I could lose my brother. Fortunately, we both stepped up and ended up having a real blast with each scenario.

We later teamed up with two family friends and my dad, so my team was always realistic in that these are the people I would expect to find myself in real scenarios with. That helped me get into the zone and take Max’s lessons to heart. I wasn’t just protecting my buddy or my team– I was protecting my family.  My two cents is that you should take these classes with your own family if you possibly can. It will make every single drill that much more impactful.

Overall, being taught how to communicate effectively makes me an asset to my family and my team. Where before I would have simply been another person to protect, I now feel I can help do the protecting. That’s incredibly important to me and it’s a sentiment I suspect resonates with many of you out there. 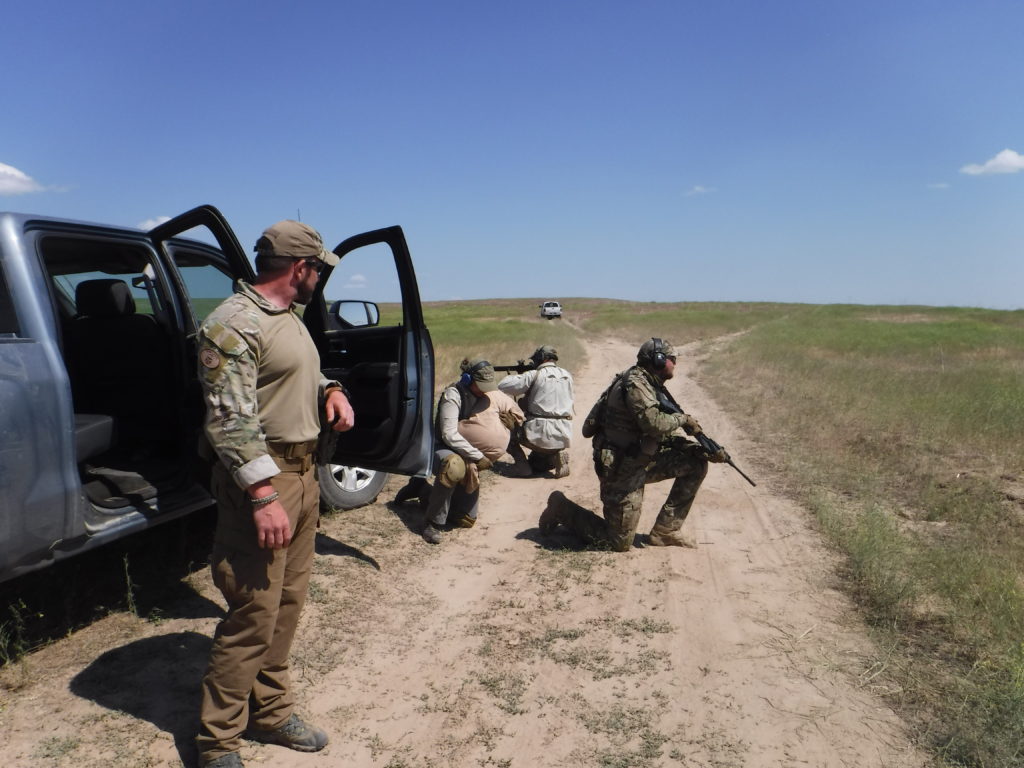 Above: Scenario: simulating a family bugout gone wrong, Kate cradles her ‘baby’ after her vehicle is immobilized in the kill zone.

The second most important thing I can tell you about the class is that I felt safe. Safety was my number one concern going in. When I heard we’d be working with live rounds, I balked. But there’s nothing that will get you to take safety more seriously than having a live rifle in your hands when you run a drill.

Also balk-worthy was the concept of short bounds. Since I was a kid, it’s been beaten into my skull to respect the firing line, to never cross it while weapons are hot. But running across the traditional “line” in short bounds is a crucial part of Max’s drills. It felt highly unnatural to do that at first. However, this class will teach you the value of safety angles and the importance of keeping your focus on your teammates instead of on your target. I no longer fear the bounds because I’ve been taught how to do them safely and I’ve practiced them with a team I trust.

Despite the initial queasiness of stepping over a firing line, never once did I feel unsafe in my class. Max and Chris kept a very careful eye on each of us, watching for safety discipline and muzzle awareness every single step of the way. I would trust these two instructors with my life– and I more or less did, actually, over the course of the week. No regrets, no concerns. I was completely comfortable because I knew they were looking out for us.

It’s mentioned in most of these reviews and I will repeat it again because it bears repeating: PT.

I won’t lie. I struggled to keep up. I’m a pretty minimally athletic woman with a desk job. I’d been warned to do exercises in advance, but I didn’t make it a priority. I paid for this oversight.

The short bounds, themselves, were manageable, but going to cover (which in our case was kneeling because of the high brush) absolutely killed my quads. Running and kneeling and running and kneeling. After just a couple of days of that, I didn’t feel I could continue without keeling over. I ended up foregoing kneeling in cover for the rest of the class, which was pretty discouraging.

However, Max made sure I got as much from the class as I could. But don’t fool yourself– you’ll get the most out of the course if you’re physically doing each drill as Max teaches them.

So allow me to say that you can take this course without being in “good enough” shape. But, as Max emphasized to us multiple times, going to cover is not optional if you’re in a real situation. Unless you’re taking this course for the simple joy of being yelled at by a man with an accent, you need to take your PT seriously.

Read Max’s page on fitness routines for the full story. But here are the cliff notes for anyone like me, lady or otherwise, who needs to increase your regular exercise: Do all of the lunges in the world. Chris will happily show you how to do them correctly and then poke fun at you until you do them. Squats, deadlifts, and burpees are also recommended. You’ll have a much easier time reloading and dealing with stoppages if you work on some upper-body strength, as well. And because you’ll be doing quite a bit of running around, cardio is important. But I can’t stress enough that you need to be doing lunges. All of them.

I have many takeaways from my experiences with these two courses. Primarily, I have a better understanding of what I’m capable of. I feel confident that I can work with a team and run my rifle competently, but I’ve also had to face my limitations. When I take the course again, which I fully intend to do, my goal is to bring my PT up to the level where I can physically handle every step of the class— because that corresponds directly to my ability to handle the situations the class simulates.

The days were long and I was dead tired at the end, sore for days and days. But I learned an astronomical amount and I enjoyed myself a great deal. Max and Chris were excellent teachers and uncommonly pleasant company. On top of that, I had a class of good folks to learn with.

If you’re looking for real-world skills, MVT will give them to you.

Parting advice: I’d recommend keeping a notebook on hand for “classroom” sessions. I personally learn by writing, so I take notes on everything. But I also think you’ll pick up plenty of interesting, sometimes enlightening information if you take notes as Max talks. Also, there’s always the chance that you’ll be able to record a truly awesome quote or two. And don’t forget. Watch out for badger holes. 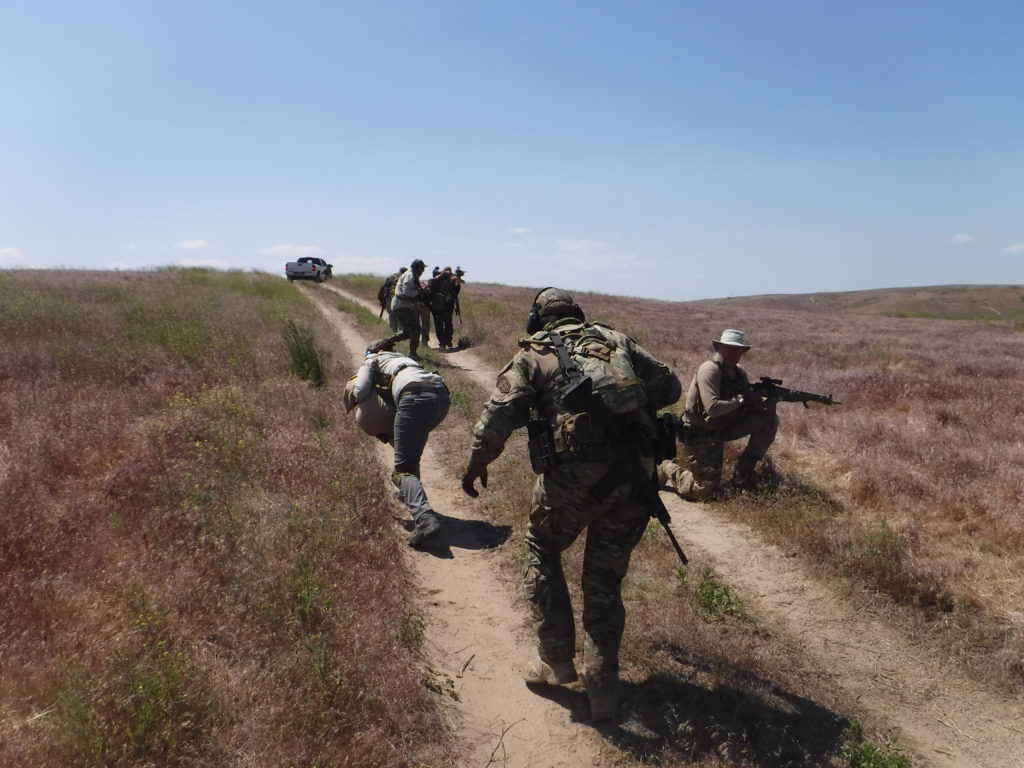