Max: The weekend of 30 May – 01 June was the inaugural Combat Rifle Manipulation (CRM) Class on the new MVT Square Range.

The purpose of this new class is to act as the connective between the fundamentals of shooting and tactical training. It is not a standard ‘square range’ class and is a fully combat focused to train the skills which will give you the confidence and ability to master classes like the Combat Rifle / Contact Drills (CRCD) Classes.

From the CRM Page:

MVT ‘square range’ weapons manipulation training remains focused on the progression to tactical training. These classes can be taken as precursors to the tactical classes, as additional skill builders, or as stand alone classes in their own right. 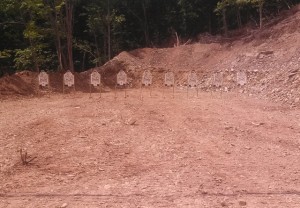 Above: not yet complete, the new range is shaping up well.

I know some of you will ask, “F why take it? isn’t it a basic class and I know you shoot Carbine all the time?”

There is one reason,…… I know how well credentialed and competent the Instructor Aaron is and I was curious, eager even, to take a class from him and see what I might learn or improve about my weapons handling.

The Class didn’t disappoint, here are some just some highlights:

The facility was spartan but had all it needed and the focus was definitely on the shooter and the gun.

Aaron, showed himself to be a natural instructor who enjoys what he does and is good at it.

I can unequivocally recommend this class to anyone.