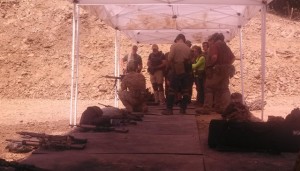 Aside from basic NRA courses, attending Max Velocity’s CR (or CRM) class is the first formal rifle training that I have taken. While I have shot various firearms since I was about 9 years old, I have never done any extensive work with them. The little bit of one-on-one training that I have had has been from my father, my husband, and generally a bunch of cranky old men…which I think has left a few training scars, making it difficult for me to take instruction with an open mind, especially from anyone I have a relationship with.

My husband has been pushing me for a while to get into some solid practice with shooting. He has read Max’s books and does shoot regularly. He signed us up for this CR course months ago.

My main goal for attending the course was to become more comfortable and confident handling an AR. Quite frankly, they WERE intimidating to me. They’re loud; for a petite woman, they’re a little on the heavy side; they’re high powered. All of that packed together made for intimidation.

When I say that my husband signed us up for this months ago, I mean that. So far back that the class structure changed between the time we were signed up for it, and the time that we took the course. What my husband had worked out was some one-on-one training for me on Friday, prior to us taking the CR course. While that was going on, he was going to attend day one of the CRCD course, now called CTT. When we arrived Friday morning, Max pulled us aside and asked me how much experience I had. I was honest — I had very little experience. What he was getting at was that while he was perfectly willing to honor the arrangements that had been made, where I would have one-on-one training with one of his instructors, he was pretty sure I would be fine in the day one of CRCD/CTT AND, then I would have the benefit of being in the course with all of the other folks there. So, I agreed to trying that. He assured me that if at any time I felt overwhelmed, all I needed to was raise my hand and they would pull me out and I would go off to one-on-one training.

At the end of that day, I think I was more frustrated with myself than anything — frustrated that I had not practiced more before hand, and that I was having a hard time pulling all of the fundamentals together to make one good shot. Don’t get me wrong, my shooting wasn’t horrible. I wanted to be able to take what Chris was saying, what Aaron was saying and what Max was saying and roll it all into one to be able to make my shots and I was having a hard time with that. But that was _my_ problem. And to quote Aaron, “I’ll get over it…” And I did. On day two.

So on Day 2 for me, it was really Day 1 of CR, the course we were really signed up for. Which turns out to be the same as Day 1 of CTT in the new structure of classes. For me, personally, this gave me the opportunity to practice everything I had just learned the day before. I was a lot more comfortable with what I was doing.

The biggest take aways that I have from my experience this past weekend are:
1) I know how to zero in my rifle. I feel confident that I could go to a range and do this without having an instructor stand over me.
2) I know what the 5 main malfunctions with an AR are, how to create them, and how to clear them, and I intend to practice doing both. I even know about pregnant unicorns: a bolt-override gone seriously wrong…again, my sincere thanks to Fred for cleaning up the mess on that.
3) I know that my left hand should be the one pulling the charging handle, even if I have not perfected that yet. And that I need to be much slower in pulling my finger off the trigger until I hear that trigger reset (thanks to Chris for his patience). I can actually do both an emergency reload and a tactical reload without dropping it all.
4) I CAN move, while firing, and I can do it safely, AND I can make the shots I need to, effectively. I can even do this with a partner.
5) Before you go to a class. Spend half a day wearing the hearing protection and eye protection that you intend to wear for the class, because you’ll be wearing it for 8 solid hours, two or three days in a row. I learned a lot about my gear, what worked, what didn’t work and what I want to change. Think about it. Most of the time when you go to a range, you aren’t spending more than an hour or two there. Well, maybe you are, but seriously, most of us have day jobs. Spend half a Saturday wearing your stuff around the house to see if you really like the way it feels. If you’re in a shitty situation, you probably want as many comforts as possible. Figure it out now, before you need to put it to practice.
6) I don’t flinch every time a shot is fired anymore, I can confidently carry my AR, I’m not uncomfortable or intimidated anymore.
7) I want to come back and take the Combat 2 Gun (C2G) course.

The knowing and the can do attitude are attributed to one heck of an instructor. Aaron is a born teacher. He is able to incorporate student’s questions into his curricula in an effective and efficient manner — and everyone takes interest when he does.

At the end of the day or class, I think the most important thing is that it doesn’t matter how much experience you have, this is a phenomenal class, and even if you are “experienced” which shooting, you will learn things you didn’t know you needed to learn. I think that everyone in the class with me learned a lot and was able to smooth out skills that they may have already had. Oh, and the classes aren’t just for men: women take them too, and I wasn’t the only one in the class this weekend. 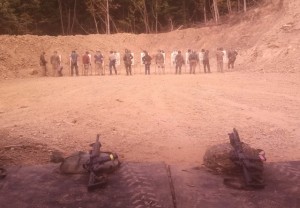