Combat Patrol is MVT’s most comprehensive course. It encompasses many of the skills acquired in previous classes and adds some new ones.

1) If you are serious about acquiring relevant combat skills, you must take Combat Patrol. If you are serious about taking Combat Patrol, you need to read ‘Contact!’ before you get there. There are several areas of study that every student of infantry tactics needs to be familiar with. Max attempts to avoid doctrine heavy lectures. I support that effort, however, it is helpful to understand and process in a time suitable for the student, the ideas behind basic tactics and planning. It helped me immeasurably to have studied beforehand. Some of the drills, such as peeling, ambush, setting up a patrol base and assault the bunker, are greatly aided by prior study, especially the diagrams. Time during the class is at a premium and Max is quite ambitious in his training goals. Chris commented that similar training in the Army took weeks to achieve the place we leave class at. Meeting these goals as students will be greatly aided by prior study. Buy and read the freakin’ book people!

2) NVGs. NODs, whatever. We had 2% illumination on our night recce. Even that low, without NVGs you could move through the woods with the starlight available. Modern warriors are creatures of the night. Learn to move with or without NVGs and pay attention to illumination and weather to anticipate conditions for your mission. You can find moon rise and illumination on weather underground dot com and a variety of other sites. Check out what different phases mean for your aided and unaided vision.

3) Navigation. I recommend reviewing map skills and land navigation. In my AO, it is more important to have a street atlas than a topo map. If you find yourself in a different AO than the one you are currently living in, a compass and topo map can mean the difference between success and dying. You will not have the time at a CP class to spend much time learning this. Consider it homework. Learn how to nav in the dark. Terrain association and limiting features are key. 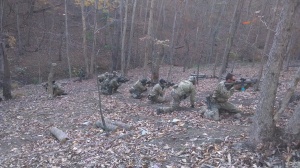 4) Stay away from the radios! I mean, if the threat allows it, then go ahead. When fighting tyranny, your phone, radio, GPS watch (yes, really) might end up killing you. Turn it off and leave it home. Or better, leave it on, under your enemy’s house. With the skills you learn, radios on the objective are not really necessary. Put 100ft of 550 cord in your pack. Good comms right there.

5) Hydrate. With all the shit going on for three days and the quick Mountain House and power bar chow I was eating, I failed to drink enough water. Rookie mistake. I felt better about my fitness now than at any time since I retired from .mil. I wore armor and a helmet for most of the class. I hit a wall during the last raid insert as my back and hamstring cramped up. It hurt so bad I wasn’t sure I could climb the damn hill. It passed, we kicked ass and ran home. Still, don’t be “that guy.” Force yourself to drink.

5) Aggression. I believe the hardest thing for guys like Max and Chris to do during the training time is impart this to students. For a variety of reasons all our own, we often hesitate. Max has mentioned this before on the blog and forum. It bears repeating. We are talking “dark side of the force” here and it is a dangerous and necessary ally. Your victory in battle will depend on it. As sheep, we are not encouraged to display this, except in controlled situations. If you are going to go full Grizzly, you better bring it all. You cannot afford to become passive in a firefight. Your buddies are depending on you to cover the flank; to kill the leakers; to destroy the center of evil in your AO. During an ambush or raid, you better bring the fucking hate upon the enemy. As a professional, you also need to compartmentalize that once the action is done. I will submit that this may only fully develop as our collapse or tyranny becomes more apparent. Be ready. 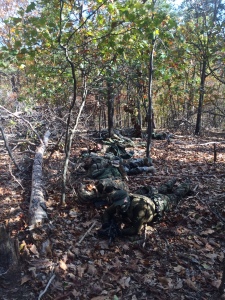 If you take this class, if you heed the advice of your instructors, if you do your homework in the gym and in the books, if you train, you will be as ready as you can be when the shit goes down. You will have done the best for your family, your tribe and your team as you could possibly do. And here’s the thing: If you tell me in some future time, that you attended MVT Combat Patrol and you need help defending the homestead against the mob or tyrants, dude, I’m there. I know what you know and you know what I know. We can fight like lions and win (and not die in our underwear) because of what we took away from this class.

– – Tyranny, like a serpent, is best killed in the egg.