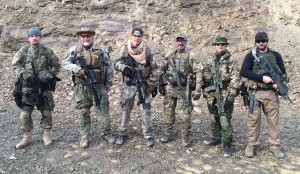 I’m turning 50 this year; I have been looking forward to this birthday for about the past 5 years. I am determined to be as fit a 50-year-old as I can possibly be. Be all you can be…I think that was the Army slogan when I joined in 1987.

I have been really busting my ass on fitness, utilizing activities such as mountain bike racing, adventure racing, and trail racing to drive my training. I have adopted a paleo-style diet which I used to drop 40 lbs and make my body perform at a MUCH higher level…yet, something was missing.

My good, old friend, Chris, turned me on to the MVT website and it hit me…I need to become as tactically fit as possible in order to not only protect my wife and 3 kids from any number of various potential threats in an increasingly dangerous world, but also to do my duty as an American citizen to protect my community and way of life to the greatest extent possible.

So…I began buying equipment, and Chris and I discussed training courses. I was tempted to skip Combat-2-Gun and proceed to Combat Team Tactics.

Why? Well, I had received M-16 basic rifle marksmanship training as part of my OSUT Cavalry Scout training in the Army. I knew it, or at least I thought I knew enough to get by. Then continued discussions with Chris made me think (Chris is good for that)…that training on the M-16 was 27 years ago! Also, after OSUT scout training, I was never issued an M-16 ever again. For the remainder of my military career, I served as a crewman (either driver, gunner, or commander) aboard an M3-Bradley Fighting Vehicle and was issued either a 1911 or M9 as a sidearm.

It would have been a HUGE mistake for me to have skipped this C2G Course and to have jumped right into CTT.

I learned WAY more in this 3-day course regarding the deployment of an AR-style carbine and a pistol (G17) than I did in my entire Army career.
I would love to go back for the Combat Rifle and the Combat Pistol courses, and I will, eventually, but I really want to get on to the CTT and the night vision course.

Night Vision…we discussed the subject at dinner with Aaron and Max the other night and at the time I thought I can’t afford it right now. The fact is, I can’t afford to NOT have the capability. I will make it happen and when I am back for CTT, I will have it.

Ok, the best thing about this inaugural C2G course other than it was fun as hell, spending time with my good friend, Chris, meeting and training with some awesome folks (Matt, Steve, Austin, and Michael – all wonderful people) was the instructor, Aaron. Aaron presented the material in an intelligent, concise, SAFE manner. He was full of humor, great movie references (some I didn’t get), and hard-earned, real-world wisdom. He utilized stories from his multiple deployments to Afghanistan and Iraq to really drive home the training. Aaron was great at inducing stress while clearing weapons malfunctions and firing exercises.

I would love to someday attend one of Aaron’s history classes, but only if I could take the course pass/fail and not be required to write papers. Aaron, from the bottom of my heart, thank you for EVERYTHING!

My very favorite thing, which I guess was not actually part of the course, was the opportunity granted by Max to run the MVT Rifleman Challenge 2-mile ruck run course and then go directly into that timed course of fire which I assume will also be part of the Rifleman Challenge. I had never done any shooting under that sort of physical stress, and it was awesome! I just need to practice.

Thank you, Max, for coming to this part of the world and offering this training. I can’t wait to come back.

Wes would have qualified as MVT Vanguard, with his 2-Miler time. 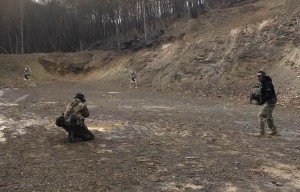