On 21 and 22 May I attended an excellent CCW/Active shooter course at the Max Velocity Training center in wild and wonderful West Virginia.  It’s not enough that all of West Virginia is built either on a steep hill and that all so-called “flat ground” is rocky and uneven, no; we had to have intermittent rain and wind for 48 hours straight!  This made for a complete training evolution!   “If it’s not raining we aren’t training” immediately comes to the mind of anyone who has ever been in the military.

Instruction was provided by Scott, AKA the “First Sergeant.”  Scott is a retired Army 1SGT and therefore one step lower that God in the Army food chain.  He served for over 22 years and is a veteran of multiple combat tours.  By personality and training, Scott commands the attention of the students.

Some students and the 1Sgt brought tents to provide some overhead cover to regroup under, load magazines and listen to the lecture portions.  Fortunately all the students were prepared for the weather and collectively a great group of Americans.  It was fun to be with them.  I am constantly pleased with the men and women I have met at Max’s training facility.  All were either previous students or had prior military experience and knew how to dress for the weather.

This course is an excellent balance between a review of basic shooting skills and training that are designed to sharpen a student’s ability to protect him or her and their family in a civilian environment. Shooters of any level will find takeaways from this class that better prepare them for the future.  Let me emphasize, “retainable skills” are taught in this class.  Many instructors teach gaming techniques that might increase your speed at a competitive event but will not really help you on a two way range.

Day 1 started with a lecture going over safety, ground rules and solid advice on concealed carry, holsters, and equipment that everyday CCW would have an interest in.  Most of the day was spent on drills and techniques that are designed to help you win a short range reactionary gun fight as well as prepare you for a confrontation with an active shooter.

Of particular interest to me was the heavy emphasis on malfunction drills.  Scott spent quite a bit of time on pounding into our heads the proper procedures for clearing malfunctions with the pistol.  We repeated these drills over and over.  We also did them with our weak side hand.  I have attended quite a bit of instruction over the years, some from pretty well known trainers and a fair amount from the Army and various Police Academies.  One malfunction technique was taught that I have never seen before.  I attended my first NRA shooting school in 1955.  I have NEVER been taught to do these drills with my weak hand.  This was a huge takeaway for me and something I will incorporate into my own training plan.

Day 1 included a night fire portion.  Very few handgun programs offer a night fire portion.  In most cases the range facilities restrict night fire because of local zoning, local anti-gunners, etc.  Here in WV there is no zoning to worry about and everyone owns guns and the noise Nazi’s are not prevailing.  Scott demonstrated all of the various night firing technique’s and then allocated enough time for each student to experiment on his own to determine what worked best for him.  We also conducted night time malfunction drills.  Various lighting conditions were also provided by the use of car headlights, blinkers, etc.

Day 2 began with a review of Day 1 (including rain!) skills and rapidly progressed into various scenarios designed to test the students’ accumulated knowledge.  Everything from an armed opponent thru an active shooter was presented.  These drills and scenarios were not too complex.  They were simple but they made the student make choices about cover, concealment and when to shoot and perhaps, when not to.  Most armed civilian’s never get a chance to practice these skills because most available ranges  do not permit this type of training (most don’t even allow a CCW holder to draw his or her pistol from concealment let alone move with a pistol in their hands and problem solve!).

Scott’s version of the Teuller Drill is an eye opener and that alone is worth the price of the training package in my view.

BTW, Scott shot most of the drills right along with us AND picked up brass at the end of the day just like the students did.  That, my friends is a subtle lesson in LEADERSHIP.

In summary this is an excellent class for CCW holders of all skill levels.  The fundamentals of pistol shooting were emphasized with the concept of building a reliable simple base for a shooter to rely on if he or she is challenged on the street.  Skills and Drills were presented in a simple format that made learning easy.  The program of instruction was well thought out and presented at just about the right pace for everyone to comprehend.  Many classes are like drinking from a fire hose and after a period of time, no matter how interested the student maybe, he eventually drowns in facts…and learns nothing.  Not so with this course.

This was performance based training not outcome based.  Each student was competing with himself and not being judged against a standard.

Personally my major takeaways centered on the malfunction drills with we learned-especially with the weak hand and the night fire with the flashlights.

Thanks to the 1SGT and my fellow students.  I had a great time, with great Americans in a class taught by an outstanding instructor.

I would recommend this class to any students of all levels.  Learning will occur. 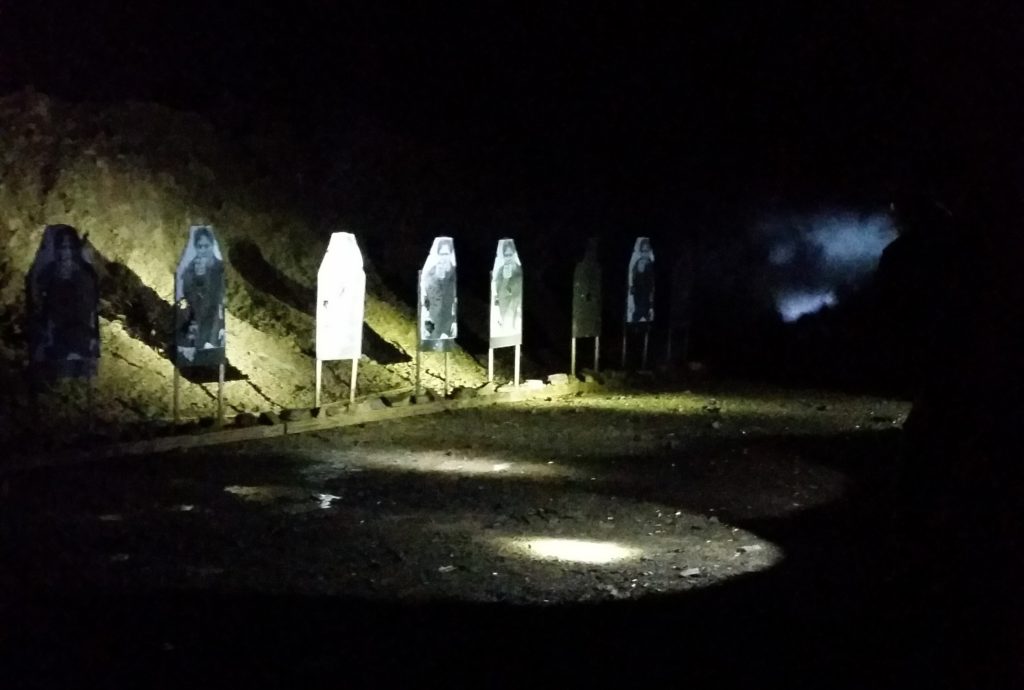