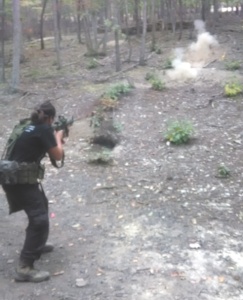 Jen (aka FaceBook) sent this to me from the KoolWink Motel in Romney, clearly feeling guilty that she is here for the MVT Rifleman Challenge tomorrow and still hasn’t sent me a Student Review from last October.

The review landed in my inbox with the following statement: “I also want to let you know how much I’m NOT looking forward to tomorrow.” LOL. 2-miler in the morning!

So a little background before I review the class: I’m a 5’4″, 26 year old woman that was pretty much born and raised in South Florida. This trip was only the second time I had even been on a mountain, let alone run up and down one. The only training I had done in preparation for the class was playing flag football twice a week and brushing up on my Call of Duty skills. I signed up because my dad had been following the site for a couple of years and finally wanted to give it a shot. Although I have only been on the site once (to pay the deposit when PayPal was up and running), I thought it’d be fun and, at the very least, a great opportunity to bond with my dad. When the time finally came to head up for the class I started my 20+ hour drive with no real idea of what to expect.

My father and I arrived the night before the TC3 class. I found it to be really interesting and highly informative. Definitely much better than CPR and health classes I do every year for work. As I sit and write this review I find that I can still remember most, if not all, of the instructions/procedures from the class. The first day of CTT (Combat Team Tactics) was up at the square range. Although I’ve done some light shooting since I was a teen, there was still much to learn in one day.

The NODF class was awesome!!! Haha and a little scary. I’ve never used any night vision equipment before other than borrowing my dad’s to look at some stars once. I had to borrow some equipment to take the class so it took me a little longer to familiarize myself with all the controls. I definitely wasn’t prepared for how claustrophobic it felt being able to see only a small area with just one eye. I’d recommend buying your own equipment and playing with it a bit before coming up, it’ll make it easier to take in the new information and make for a more fun class.

The second and third day of CTT were a fucking blast! Not much else I can add after my dad’s (Dennis) and Matt’s reviews.

Now the combat patrol class… the patrol class was hell. There is down time when you practice setting up the base but carrying 50+ lbs up and back down the mountain was flat out exhausting but NOT one person quit (although I used my rifle to help me up once or twice). Max made me squad leader for the night and my battle buddy, patrol leader. The night was cold but it passed quickly. The next morning we conducted a squad attack. We walked out to the other end of the property and break down into two squads. My squad was the assault element and the other was the support by fire. I have to say that this last exercise kicked my ass and I barely made it back down to transport. If it wasn’t for the encouraging words of my battle buddy, I’d still be stuck up that mountain. After a debriefing and awards we were released. It was during our last trip down the mountain that I realized that I survived the whole course.

In conclusion, the class in its entirety was pretty awesome. Max and Chris are not only badass instructors but they are some of the coolest and funniest guys I’ve ever met. They pushed me, and the whole class, to surpass our expected abilities. Everyone in the class got 10x’s better. I was a little worried about safety before starting the class but all worries were immediately quashed after I noticed all the precautions that Max and Chris took to ensure everyone’s safety. I also want to take a moment to encourage more women to take the courses. I was the only girl in a class of 8 with 4 instructors and never felt uncomfortable or out of place. Yes, I struggled, as did everyone else. But we ALL finished!

A big thanks to everyone at MVT! Hope to see some of you tomorrow for the Rifleman Challenge!

Max adds: I cannot tell you how proud I am that you are here for the Rifleman Challenge. 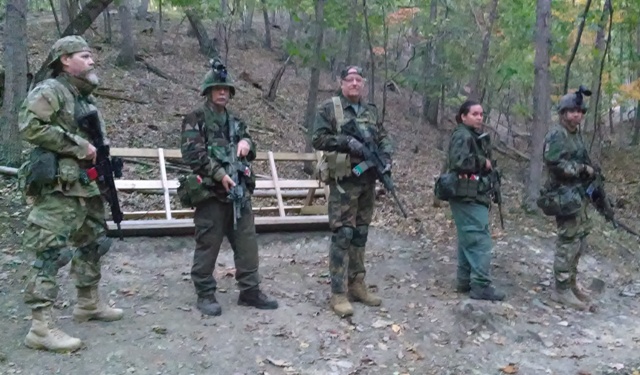