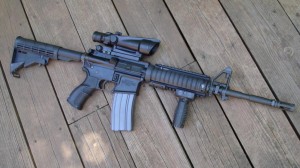 Knuckledragger thought for the day:

Observing training, and how people perform while doing it, I have to say that there is no justification to not have an AR-style rifle.

Yeah, Yeah, I know. You want to bang on about putting them down at 1000 yards, turning cover into concealment, and all that. To which I say: get out and do some tactical training. Don’t just polish it and put it in the safe. Get out, down and dirty, and train to fight with your chosen rifle.

As a tactical battle weapon, you can’t really beat the AR platform. 5.56mm ammunition is portable and effective in combat.The weapon is easy to manipulate and operate. Inter-operability, optics, spare parts are common and easily replaceable. Safety lever manipulation is easy. For example, the SAS long ago went to the M16 and now the Canadian built Diemaco.

I just use the Colt Law Enforcement 6920. I’m a simple guy, not a gun smith. I don’t want to have to ‘build’ my rifle. I just want a weapon I can trust and that I can kill people with when it becomes unavoidable. I just buy the one that seems closest to an M4. I just throw on an optic, replace the hand-guard with a rail and some ancillary gear. Job done. Choose your specific poison.

My one caveat: for slightly built females, I recommend a bullpup design. Something like a Tavor. With the weight to the rear, it is easier to manipulate and to bring to the shoulder and aim, reducing ‘wobble.’ If the ammo/magazines share commonality with your husband, then it’s not a problem.