Round-Up: Over the transom on Oathkeepers & Justin Giles

I posted yesterday the following:

‘Info from over the transom: Justin Giles of OathKeepers‘

More has come in since. Its veering a little towards the Bundy Ranch fiasco.

1) This one came in with the following quote: “I was up at Bundy Ranch.  Oath Keepers used it as a cash cow.” Anon: LINK to a Bundy Ranch AAR on WRSA (It takes you directly to a comment which is the AAR).

2) “The guy I was talking with was basically threatening to unleash the wrath Stewie on me if I didn’t listen to his “orders”.  I suppose since I had an OK patch on he figured I was his subordinate.  This guy went so far as to get out his cell phone and call Stewie and actually say to him, “There is an OK here that won’t listen to me”.  Never ever again will I associate with OK as long as they are lead by Stew.  Never ever will I associate with a militia, the level of retard I observed those couple of days was enough to clue me in that I was better off on my own or at least with some close friends.” Anon.

3) Here is a post I did: ‘Thoughts on Organization‘ – with some specifics aimed at Bundy Ranch.

4) HERE is a story linked through The Blaze that is relevant because it contains reference to, and a photo of, of Justin Giles: 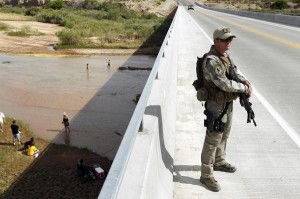 It would appear that the OK organization has intent to command and coordinate other entities, but it appears it does not have the legitimacy or competence to do so on the ground.

It also appears that the ‘militia’ at the Bundy Ranch were a complete cluster fuck:

I also see the same with the ‘militia’ who showed up at the border, with face masks and carrying their weapons by the magazine, etc. We are all the militia, don’t fucking embarrass me!

What is missing is organization and training, which results in lack of legitimacy.  The true source for that in reality would be properly trained and experienced combat veterans, who posses leadership ability.

Unless you have organizational leadership with legitimacy, which a majority of the people who turn out will follow, then you have nothing. Just a cluster fuck. That excludes the PRI’s (Paranoid Radical Individualists) who will follow no-one and are no good to anyone. No team there. They hate military types as well.

The bottom line is that to have an effective paramilitary organization it needs to be run as per a military organization. No, don’t confuse that with the modern military, but perhaps an older school one. Army of the 1980’s perhaps? I talk about this in my ‘Thoughts on Organization‘ post.

In order to make an organization like that successful, people must willingly associate and subsume their interest to that of the group for the purpose of the team effort. There must be a Captain, and Sergeants, and all the rest of the structure to make a military organization work. It doesn’t mean you are jumping to attention and all that. It just means you do the job in a quietly professional way.