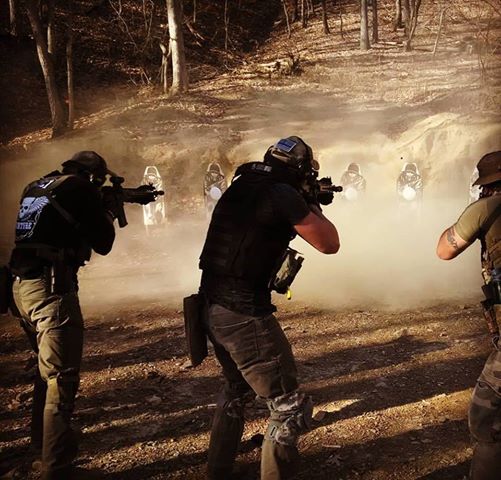 Review: RS day + CTT Nov 2016
I learned more in this four-day class than I had over the span of years. To be blunt although I was not infantry or any “special” unit in the Army looking back at that training I feel a bit robbed compared to the level of knowledge gained this past weekend. This is not a bash our military thing at all. I took what I was given and made the best of it as many of us have and continue to do. I also realize the armed forces are huge and training levels can differ greatly between units, locations, and instructors. Again I have a high level of respect for all of our service men and women who have served, continue to serve or will serve period. With that said I wish I had this training when I was in to open my mind and understand sometimes the “basic training” is not all you would need to stay alive and be effective in the fight. 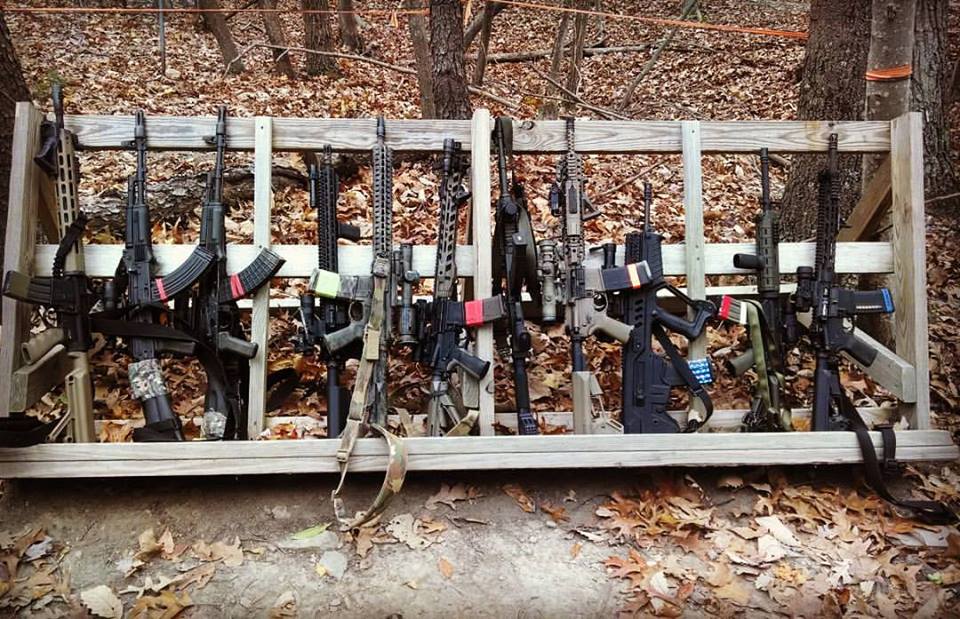 So you understand where I am coming from here . I served in the US Army from 1995 – 2001 as a 63T Bradley Fighting Vehicle Mechanic) I ended up doing the H8 recovery school training (big 56 tons of slow moving tow tank). Again as a wrench my focus was not on combat tactics and only included the “basics”. Had I actually been assigned to Bradley unit I assume my training may have had more infantry focus however I was stationed with Artillery units (MLRS) that included one short deployment to Albania (Task Force Hawk) and some good times in Germany before I tweaked my back up fairly good and had to end my military career early. Now I sit (or stand thanks to standing desk options) behind a computer for most of the week for work.
My goal going into this Combat Team Tactics (CTT) was to get an idea of my gear and setup as well as I wanted to run the PC with the plates the entire class. (Yes, lighter plates are on my wish list). Also I came to this first CTT class knowing I will be taking it again and hopefully all the other classes MVT offers. I read over the forums many times trying to pull together a kit that I felt would work for me and hopefully not break the bank. So first of a huge thank you to all those who post and comment in these forums it helped me get things sorted to a good starting point. 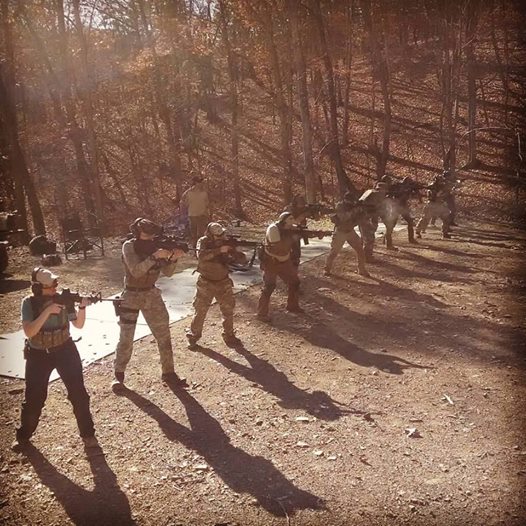 The class instruction was easy to follow and replicate. Many of us tried to complicate things instead of keeping things simple. Worried about details that would be hammered out later in training. Don’t get me wrong
you need to ask the question if you are confused or need to but in most cases we would simply be making things more complicated than we needed. Muzzle awareness, don’t cross your legs, don’t spin around and most important communication. It is crazy how such a simple concept can be so hard to remember for myself at least. At times I found my mind fumbling with the exact term instead of just getting the communication out as needed. I feel this will get better as I become more comfortable with the other tasks I felt my mind trying to focus on the other new concepts to me. Max warns us many times on other mistakes he has seen in the past in specific drills and that saved many of us however even with the warning we found ourselves making the same mistakes. Again I feel this is just something that takes more practice and repetition. This was the first class for John and his practical experience and real life examples helped drive home the importance of the drills being trained. 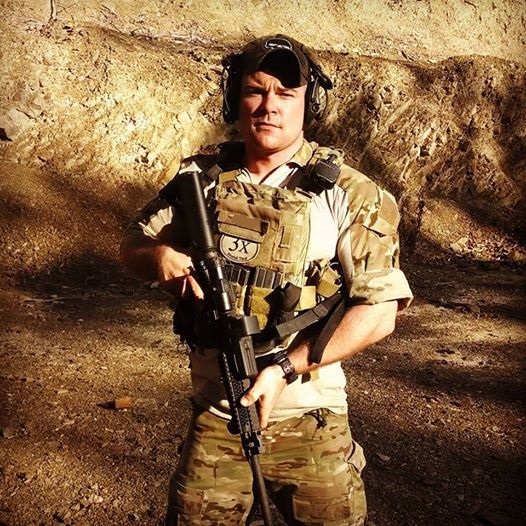 Above: John Instructing
I would recommend this training to anyone. I have also stressed it to a few folks I hope to get back out to train with in the near future.
Some things I forgot:
Chapstick (that pain your lips give you with the wind chap is no fun don’t forget chapstick).
Small hydration bladder: I have a large 3L hydration bladder in my AP but will need to do more PT and make some additional changes before I am rolling with that pack. So a small low profile 50 oz. bladder would
be nice to have on at all times. (I almost added a canteen to my BB but rather keep the drinks fast from bladder IMO).
Hand lotion or balm. again that wind was brutal even with gloves (perhaps my gloves made it worse).
Some things I changed/learned after:
Mechanical offset… I thought I hammered this into my head…I swore this would not be an issue for me…and then I was the first (and I think ONLY one) to shoot a magazine laying on the ground in front of me (sorry again Steve!). Also heard John scream that I was shooting the branch or dirt several times. So I obviously did not have this down despite reading the warnings from other posts.
Velcro pouch to carry EPIK (AR500 side pouch Emergency Personal Injury Kit) had velcro on it. This was on my list of stuff to replace ASAP but had to make do with what I had and Max let me know every time he spotted it. Will be ordering something pull tab to replace the velcro crap. The velcro crap will go to my loaner/spare gear ;) 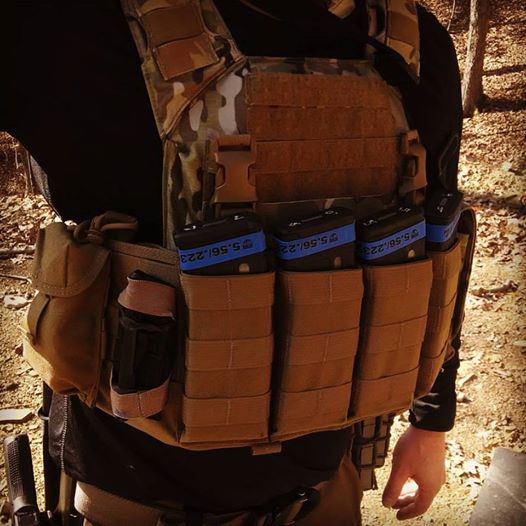 Above: Bryan’s gear: 3X Special Forces Rig clipped to a PC with the PC Kit.
Next Max even states it on one of the gear posts. I had tried running 3 x30 rnd mags on my lite BB and looking back this was a mistake (bruises to prove it) I can easily rotate that 3rd mag (to keep 8 on me) up into the 3x SF rig and or swap some 20 round mags into the BB. I went with the AWS BB system. This thing has the velcro under belt and the size I ordered was a bit larger than I needed (had to make some modification to it to get it tight and then lots of slack belt rolled up) I will be ordering a new belt. For this CTT class, I feel the Velcro worked great keeping everything up and did not have to break noise discipline but in something like CP this would be a no go unless you wanted to sleep with the BB on I assume…and that may not be fun.
knee-pads: I will be ordering some new ones recommended from some of the other students before my next class. I found myself spending more time than I wanted adjusting the pads and pants. Not to mention every time I did take a knee they would pinch the back of my legs. (this is something I probably could have sorted out before going to class but did not test run the knee pads as much as I should have). 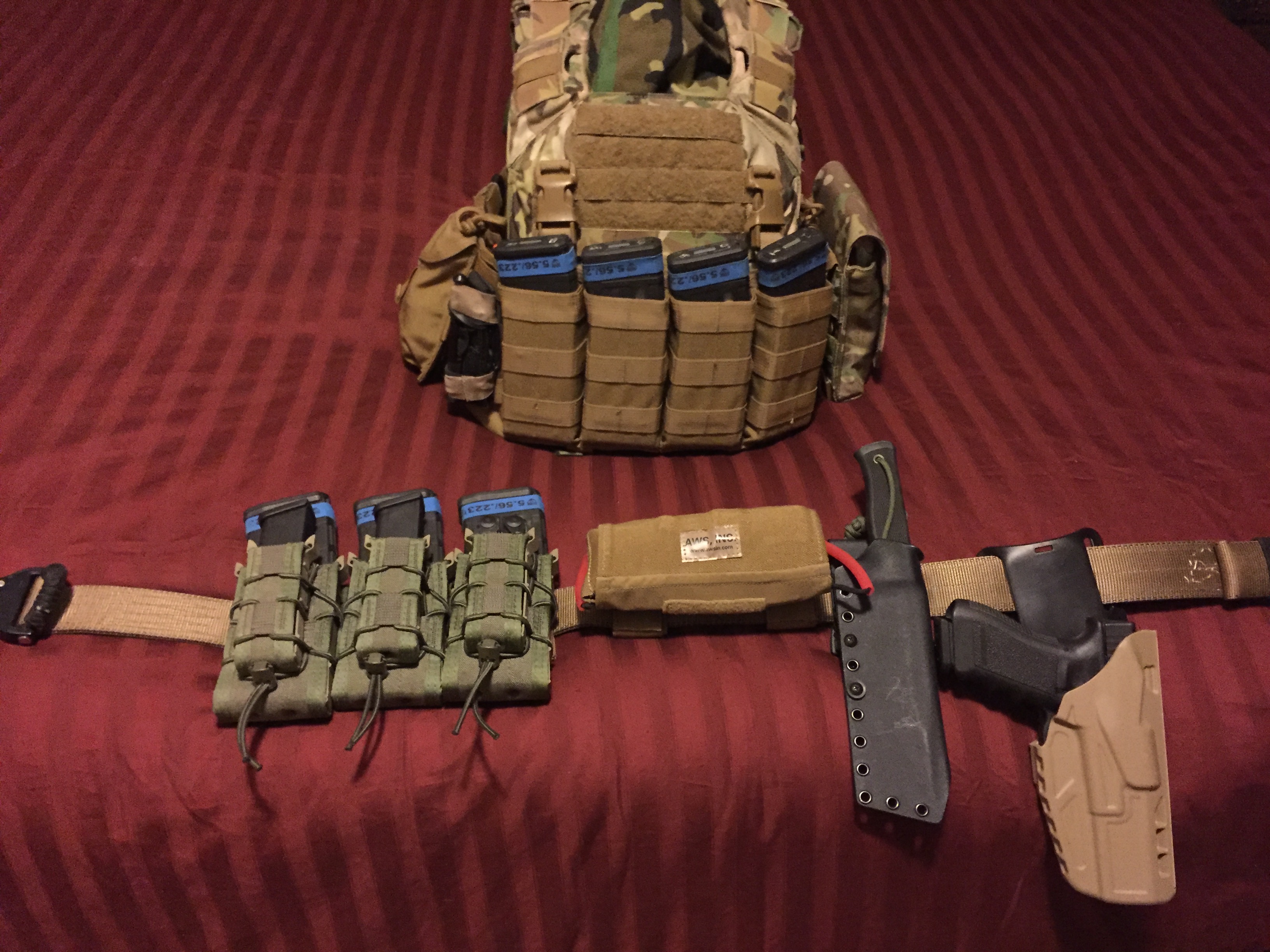 Above: Bryan’s Gear
(Max Comment: Great use of the MVT Gear Philosophy. 3X Special Forces Rig attached to a PC with the PC Kit. You dot’t have to run the PC if you don’t want to. BB is too heavy for my liking. MVT will be coming out with a ‘Lite Belt’ shortly. IMO: 2 x rifle mags 2 x handgun mags on support side hip. Strong side hip: handgun, knife. TQ somewhere, I run mine right side front. You don’t need suspenders, the belt will not fall down! If you want more mags, the MVT 556 Patrol rig will run 6 in Kydex mag pouches. The 3X Rig will run 4 in kydex and up to another 4 in the side radio pouches ( 2 each side). That is without attaching any additional pouches to these rigs. Excess gear goes in your daypack.)
Below: Max’s current Lite BB setup:

PT: I thought I was doing good running 3-4 times a week 3.5-4.5 miles each day and then jogging with PC/plates months before class. The last day of CTT I felt like I had to drop some weight so I packed up the pistol with mag and 2 additional pistol mags to drop weight and reach my goal of keeping the plates on. The terrain is more brutal than I had been training on and I need to make an adjustment to my PT for this. You do NOT have to run a PC or plates. You may keep your kit as light as you want (as long as you have the require mags/other gear) this was simply a personal goal of mine. 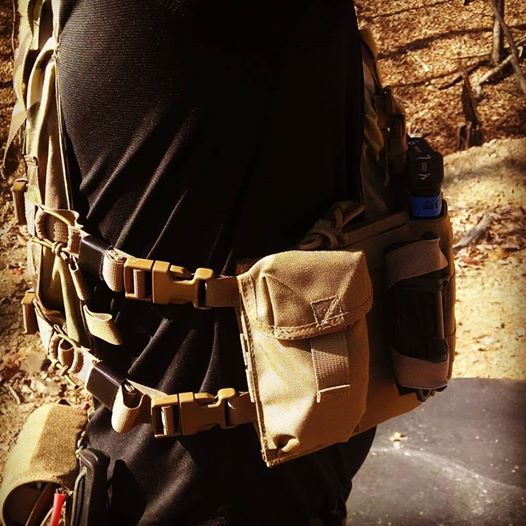 Above: Bryan ran the 3X Special Forces Rig on his PC without the cummerbund, just using the PC kit straps to replace the cummerbund.
To sum it up this was the best tactical training I have received and meeting all the other students was an added benefit. Camping, I almost forgot. Max offers basic camping on site! yes, it was cold at times and no I probably would not camp in Dec but Aug was awesome when I camped for the hand gun class (even with hot sun heated shower) and Nov was not bad but did miss the shower (sorry for my stench class) but sometimes it is good to push out of your comfort zone while you are pushing outside your comfort zone. (being broke and trying to save a buck also sometimes comes into play)
-Bryan (zeerf) 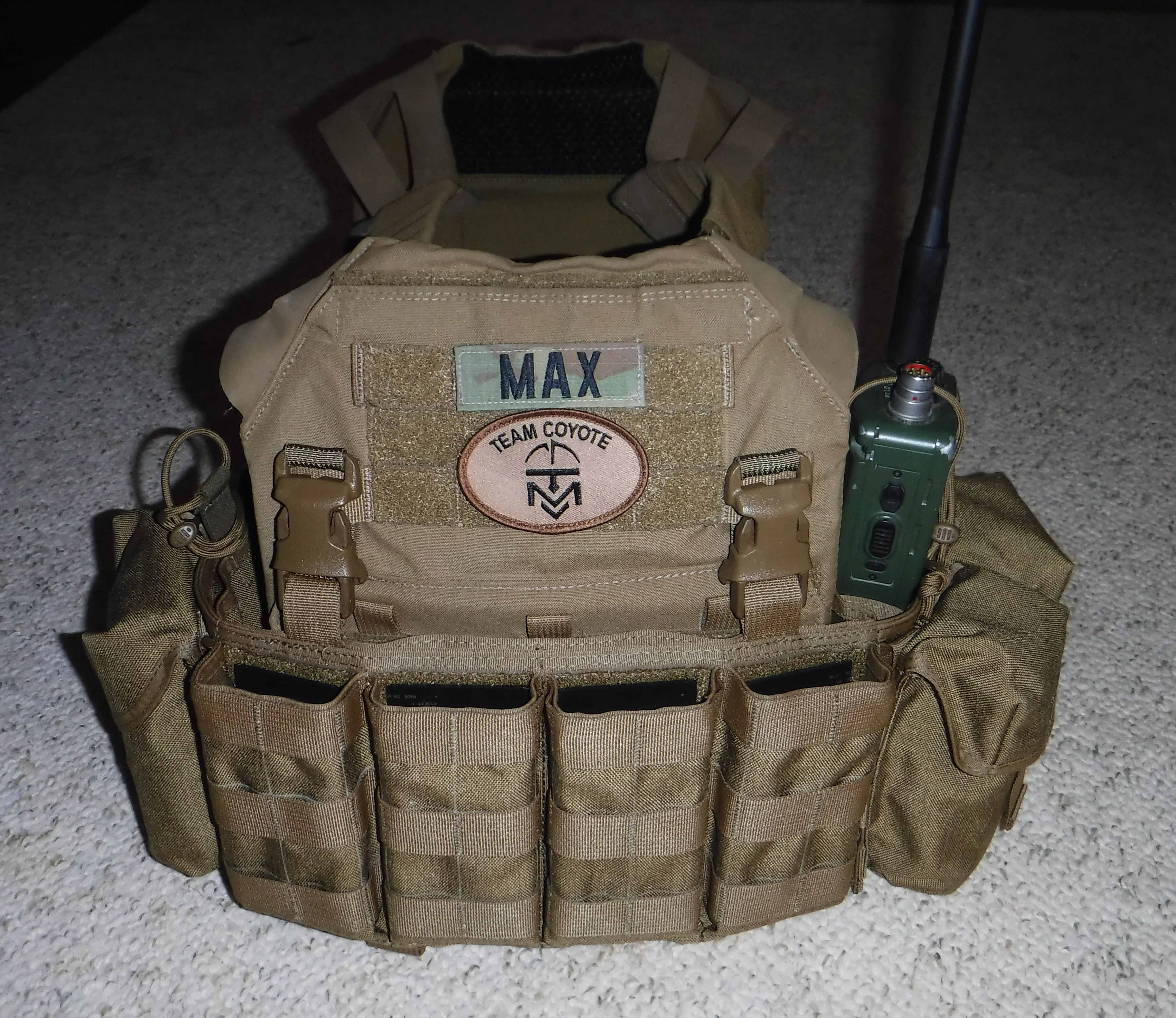 Below: Right side view of same setup: 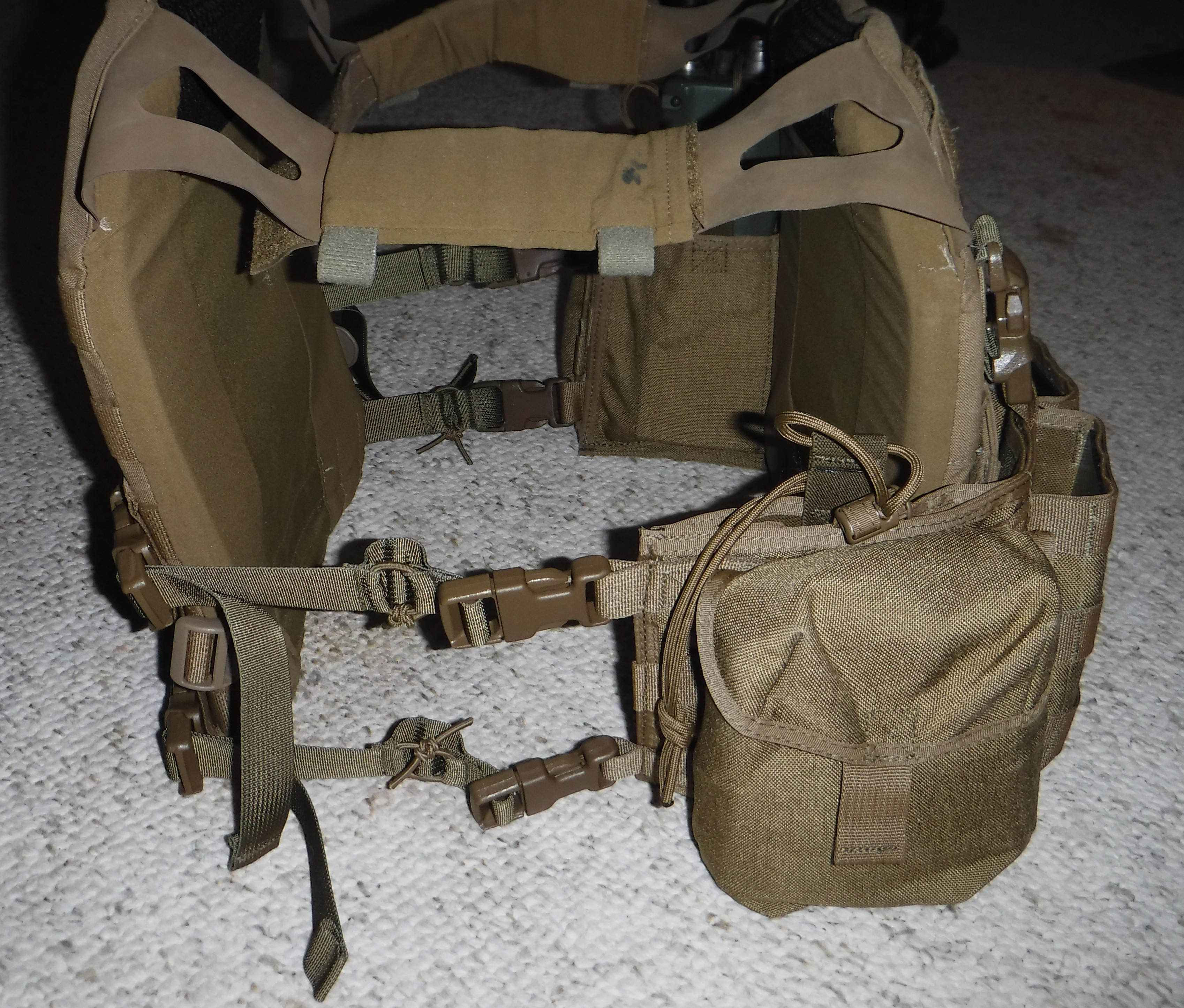 Below: Left side view: 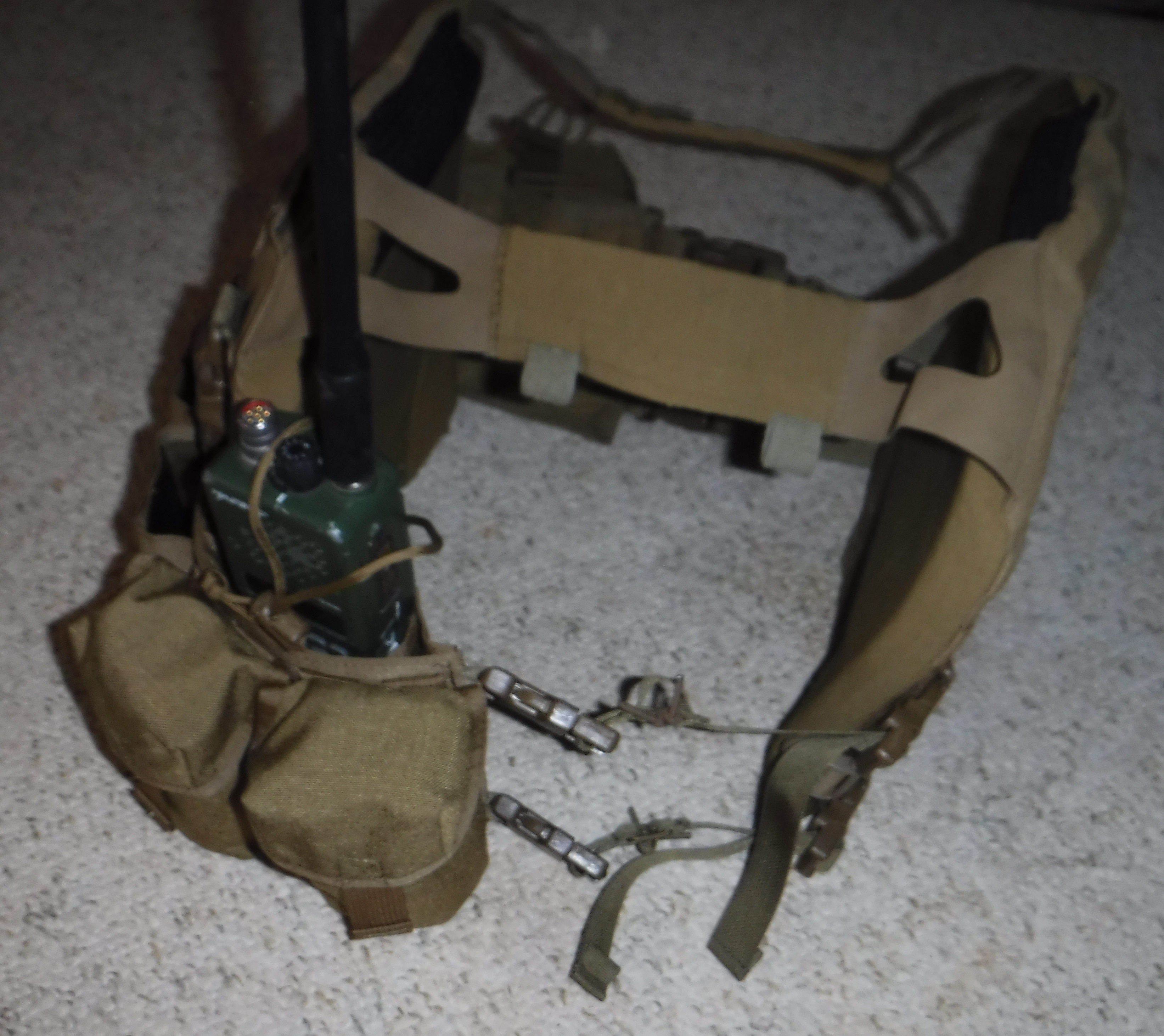