I attended the June 3 – 4, 2017, Combat Rifle Skills course in Romney, WV presented by First Sergeant Scott David. This was my first dedicated rifles skills training after shooting the AR platform for a few years with minimal training.  The class consisted of newbies who had shot less than 50 rounds through an AR-15 to former military/veteran law enforcement officers, current duty and retired.  As with any MVT class, safety was first and foremost.  Scott thoroughly and professionally covered the basic safety rules for the AR-15 platform with ample discussion and explanation of student questions, concerns, and previous personal experiences.  I particularly liked how Scott spoke about the things he’s learned through years of real life combat situations, what he found doesn’t work, and how you need to take a class (preferably at MVT) to figure out what works and doesn’t work for you personally when it comes to gear and gear set ups.  The point made being the time to figure this stuff out is in class, not in the real world of life or death split second decision making situations.
From safety and gear, the class progressed to an extensive discussion of history/practical application/function of the AR-15 platform.  This was particularly valuable information for me, the beginner, to hear from the extensive practical experience of Scott.   Trust him to give the no-nonsense, straight scoop from conception, to production, to refinement of the AR platform in common use today.  Particularly beneficial to me was the discussion of which lubricants, how much, and where on the rifle proper lubrication should be utilized in order to keep your rifle functioning and performing to its designed capabilities. Next, a field strip and explanation of the function of each major component of the AR was thoroughly covered, including the need for carrying spare parts in the event something malfunctions/breaks while in the field with your weapon.
From the discussion of rifle function, proper lubrication, and spare parts, the CRS class progressed into actual reloading drills, “zeroing” drills, and malfunction drills with our rifles. While being instructed by Scott on the specific details of each drill, particular emphasis was also placed on communicating to team members what was going on with our rifles when a particular “stoppage” occurred, whether it was an empty magazine or a malfunction of some kind.  Then, after the stoppage was fixed, emphasis was placed on communicating to other shooters that the problem was indeed fixed, and the shooter was “back in” the fight with a fully functioning rifle.  Practical application of each drill and corrective feedback was in abundance as we moved through these drills that comprised the training for Day 1.
Day 2 of CRS began with a complete review of the safety, reload, and malfunction drills of Day 1 in order to “cascade” the training from the first day into the second day where more involved shooting drills would come.  After a discussion of “mechanical offset” between the barrel and your rifle’s optic, “ready ups” were explained and continued into the shooting progression of “head, body, weapon” with controlled pairs.  After much practice and correction, Scottled us into Non Standard Response (NSR) drills consisting of hammer pairs and stream firing. Building on the previously taught skills, the class moved to the concept of “Cover vs Concealment” and shooting these drills from both strong side and support side (and different eyes as well).
RTR drills – Return fire, Take Cover, Return Appropriate fire were the culminating drills of Day 2.  This was where everything Scott instructed us on was put to use in realistic scenarios with a fire buddy.  As always, emphasis was on safety and the correct application of the multitude of skills he taught us leading up to this.  Indeed, a tall order for a novice rifle shooter to master in approximately 16 hours of range instruction, but Scott is a master teacher extremely competent in taking you where you were at the start of Day 1 and giving you a rock solid foundation of rifle skills by the end of Day 2.  He is particularly adept at corrective feedback in a instructive/constructive manner all the way to a blunt, matter of fact, “what the hell are you thinking about…” butt kicking when repeated instruction is not heeded and correct procedures are not demonstrated.  This exacting attention to detail and executing correct procedures are paramount to student safety and student success of the stated goals of the class. This the exact training we all should expect and is the exact training Max Velocity Training provides students in the class offering.  This was my second class in as many months at MVT and it certainly will not be the last.  There may be other trainers that do as good a job as they do at MVT, but I know of no one doing it better, more professionally, or more skills based than MVT. Get trained right!  Get to Max Velocity Tactical for the real life tactical training from the real life professionals.
Below: Scott Running CRS: 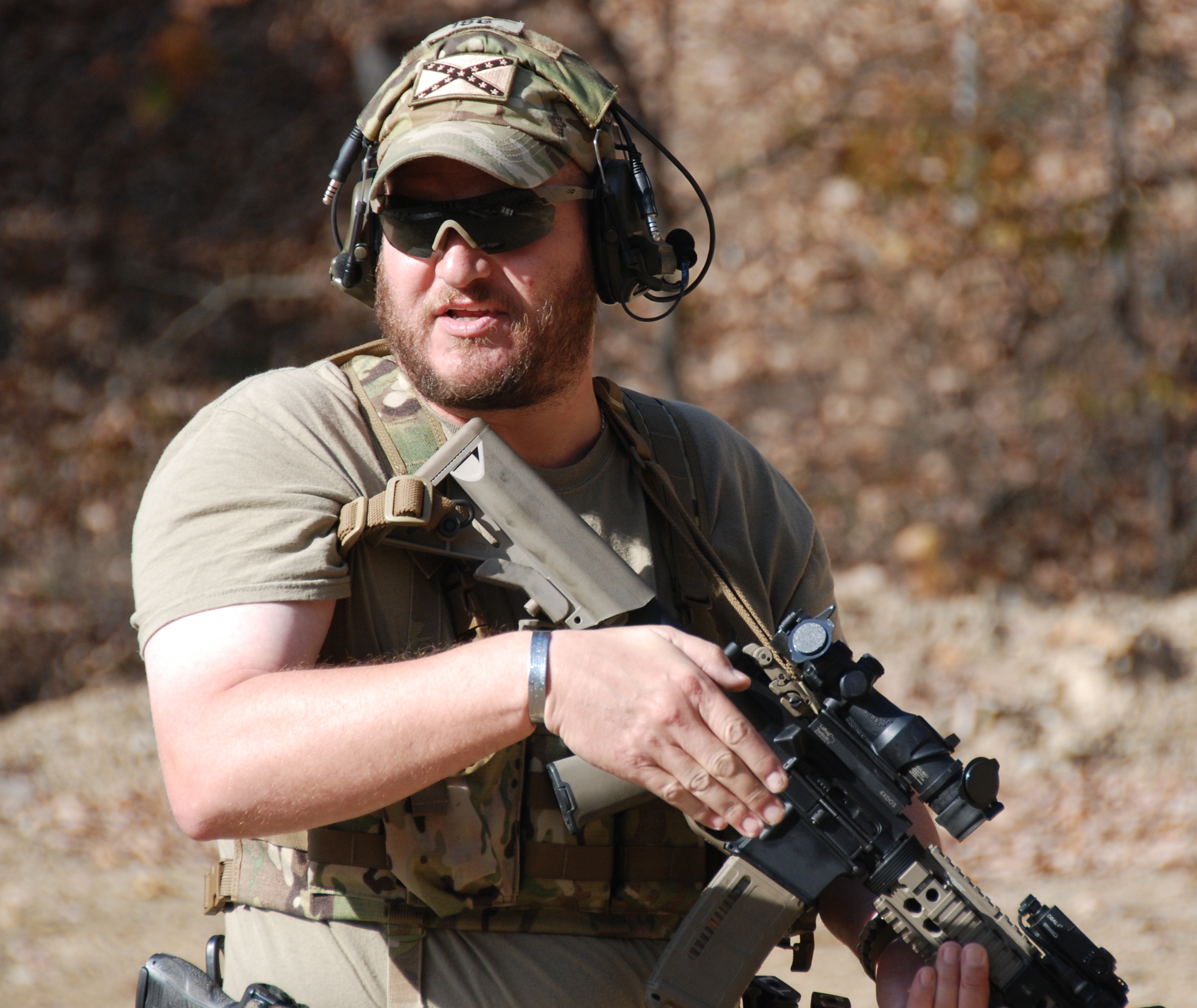