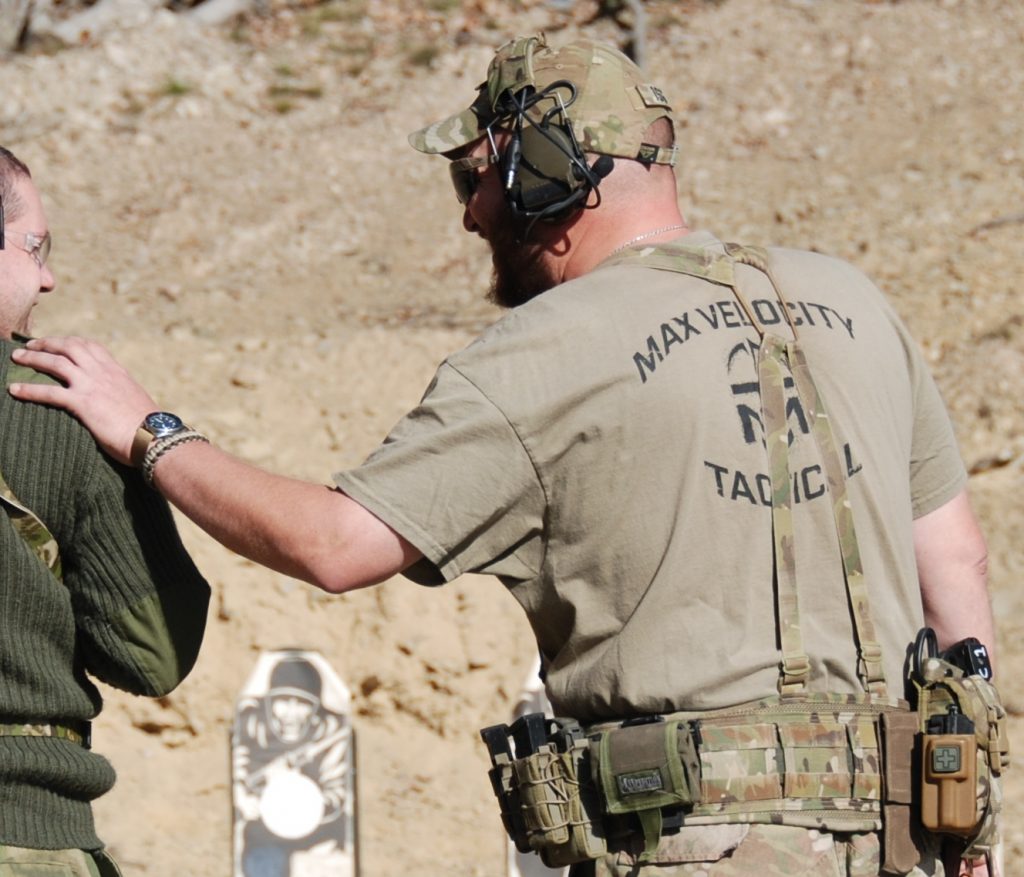 I was invited by my brother to attend the Combat Rifle Skills course in Romney, WV on August 19-20. Our instructor was Scott. My experience level consisted of a borrowed AR-15 with a total of 6 rounds shot in my brother’s back yard. Needless to say, I was very inexperienced with a rifle and had no idea what to expect with this type of class. I came prepared to take notes and learn as much as possible about handling a rifle.

We started the class with a basic introduction of all of the participants so we could get to know each on some level, rather than just being a bunch of strangers. We quickly progressed into learning about the history of the AR-15 platform and where it is today. Not knowing anything about the AR-15, this time was valuable to me to understand what “AR” really stands for (NOT ASSAULT RIFLE AS THE MEDIA WANTS YOU TO BELIEVE). We then when into how to breakdown the AR-15 and learn intimate details about each one of the major components of the rifle. Scott couldn’t stress enough the need of having spare parts available and ready to go. As he says, “Murphy does get a vote”. Cleaning the rifle was covered as well with all of the major lube points covered. This was invaluable information to keep the rifle up and running in top condition. Tactical gear and its practical application was covered extensively. We had a wide variety of tactical gear in our class and Scott stressed that this class is where you will figure out what gear works and what doesn’t work. That was definitely proven during our class time on the firing range.

After our discussion and all questions were answered, we proceeded to the firing range to “zero” our rifles. I had never done this before, but Scott’s expertise in this area really helped me understand how and why this is done and why it is so important to get it right. I can’t say enough about how much safety was stressed at all times when we were around our rifles. Scott was in complete control of every situation where the rifles were in our hands and I felt completely comfortable in this environment. We learn several types of weapon reloads and practiced them to help them become second nature. We were starting to lay a foundation that we would build upon during this two day training.

Malfunction drills were by far the most challenging individual element of this training. However, it can also turn out to be the most rewarding. Scott couldn’t stress enough to just stop and think about the malfunction before attempting any type of clearing maneuver. Not knowing what type of malfunction you are clearing might cause you to make the situation worse. As Scott said over and over again, “The ejection port tells you everything you need to know about the rifle”. You will also hear Scott say over and over, “This is a thinking man’s game”. Man is he right. Communication with your classmates is also something that is taken very seriously in this training. As Scott says, “It’s not about you, it’s about the other guy right next to you”. We are a team and are expected to work as a team and put others on the team before yourself. As we progressed into shooting drills, whenever you run empty, you are expected to yell “Stoppage” to let your team know you are out of the fight. When you have reloaded and confirmed you’re up and running again, you yell “Back In” to let your team know. Sometimes in the heat of battle you will forget to do this, but don’t worry, you will be reminded that it’s not about you, it’s about the other guy. This does become second nature after a while.

Day2 started with a short comprehensive review of Day 1 activities. We then progressed into many different types of shooting drills that built on each other. We learned the “patrol ready” position that stressed having the muzzle down. Scott constantly reminded everyone to be completely aware of your muzzle location at all times with your finger riding the safety in the on position. I never felt threatened by other team members with their rifles, as safety and muzzle position was stressed constantly. We learned how to maneuver with the rifle using the “head, body, weapon” mentality. This allows you to square up your body to the threat before engaging. This is also part of the safety regimen we practiced during each drill. We learned that the standard response to any threat is a controlled pair of rounds. This was used during most of the drills that we learned. We also learned what acceptable “cover” is and what it is not. This is something that you might not think about, but this knowledge can and will save your life. We learned to proper way to shoot around cover from the strong and support side. Taking your time was stressed when shooting from the support side, as this can be quite awkward the first time.

Building on what was already taught, we progressed to shooting on the move. Scott taught from his experiences about shooting, moving, reloading, and taking cover. These drills have real world application and were done repeatedly to ingrain the movements necessary to survive. The final drill involved shooting and moving in pairs. If you have never had a bullet fire from behind you, get ready for this. Scott explained this thoroughly and was right there with every move we made. This was by far the most enjoyable drill we did. Everything we had learned from the first day came into practical application all at once. What an awesome experience that was.

Scott and MVT do an outstanding job of providing the right training to help learn the correct way to train and help you survive. This training has given me the confidence that I did not have when it comes to knowing and executing with the AR platform. Scott’s personal insight and guidance has been invaluable to me. If you are looking for professional training done right, then I strongly encourage you to attend a class at Max Velocity Tactical. You will not regret it. I am looking forward to attending more training classes in the future at Max Velocity Tactical.