I took a couple of photos with my phone. The square range is not quite complete, it will get finished this week. But it was good enough to use. 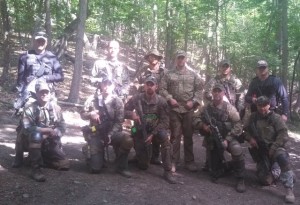 Above: CRCD Class out at the Tactical Range Area.

One thing to say about the CRCD class: they were a switched on bunch, which made my weekend less challenging. They were also in shape. This cannot be stressed enough. Yes, I can get you through CRCD if you are 100 lbs overweight. I will adjust the class to suit you. But that isn’t really the point. One of the take-aways for many from CRCD is the need for more PT. But CRCD itself is not really a physical challenge. You will breath a little heavy after a fire and movement lane. That’s it. The point here is not that I may adjust the speed/difficulty to suit you if you are finding it hard. The point is when you ask me at the end how you could improve, and I tell you to “keep lower, move faster.” But you can’t, because your PT level is piss poor. That translates to real world survival chances – not good.

You can only do this kind of tactical self defense/infantry work to any effective degree if you are fit enough to carry a suitable fighting load and move yourself from place to place. I’m not even advocating a huge load, in fact a skill lies in paring down your load rather than ‘boy scouting it’ with the kitchen sink. I am afraid that is the bottom line. So many have no idea about fitness and are really in such poor shape. What are they thinking?

For many people, they are living in a fantasy land. They may think they have rejected normalcy bias by ‘waking up’ and becoming a prepper, but they are now living in another form of denial by stacking the mountain house deep, buying a couple of rifles, spouting off about how .308 is better than 5.56, and being utterly useless. I mean, seriously? Are some preppers only prepping because they can’t stand the idea of not having a house full of food to shove down their throats? Don’t get me wrong, I am here to help preppers survive, but they won’t do so by living in this PT denial.

In my opinion, the two main impediments to survival and freedom in our current state are:

Training and subsequent real life missions cannot be effective without a decent level of PT, so this all boils down to the key main impediment to freedom:

Which boils down to:

Put down the cheeseburger and Doritos, and get out and do some PT!

Half the people arguing about the caliber debate are fat asses who never leave the computer screen, and when they do they get into a truck and drive to the flat range to ‘shoot at long range.’ I’m not even going to debate it anymore. I’m going to attack the premise of your argument. Until you show me that you can get out and perform, I don’t care what caliber round you like to shoot. Because either way you are good to no-one if you are an untrained fat ass.

Even barring injury, age is no impediment. I’ve had slim and fit 67 and 73 year old’s come through the class, who can outperform younger men.

There was a post from Kerodin’s page linked on WRSA that talked about WWII Jedburgh teams. Part of the point was to say that these were small groups who had only shortly before been civilians. The point being – if they could do it, so can you. Did you see any of the photos? I can tell you, these guys were physically fit and trained. Not lazy delusional fat asses. Do PT. Get Tactical Training. 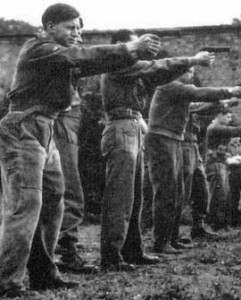 Above: Not an MVT weapons manipulation class. Jedburgh teams in training.

And not to get me started, the other impediment to freedom is cowardice and the failure to stand up in your day to day life to the madness of ‘progressivism.’ I mean just stand up and calmly call it like it is: “Yes, Mr. Principle, my son ate his pop-tart into the shape of a gun. He likes guns. He’s a boy. He likes playing war. What is your problem, Mr. Principle? You are going to suspend him? I don’t think so.”

Push back the madness at any opportunity. Stand up and be a Freeman worthy of those greater past generations. If you don’t earn freedom every day, you deserve when it is taken away.

Above: Smoking Bunker after the final Squad Hasty Attack 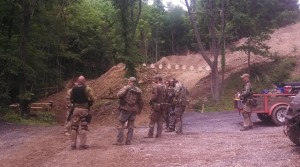 Above: Assembling for RMP on the Friday 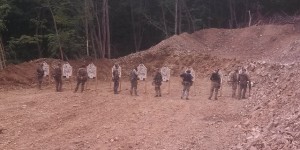 Above: RMP class on the nearly completed square range 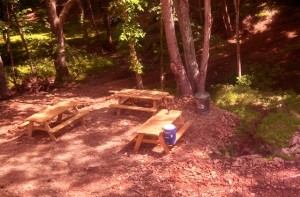 Above: Rest area at the square range taking shape.