‘Texas Frederic Bastiat’ sends in some photos, following comments about drop-leg loads and how he wears it in the comments section of the  ‘Gear: More Discussion on Load-Out Options‘ post , in particular how he finds it more comfortable and practical than a standard battle belt. 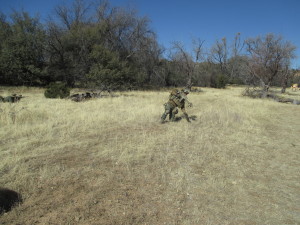 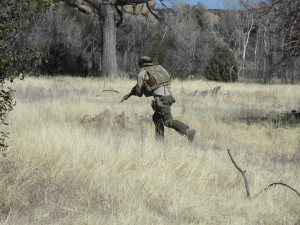 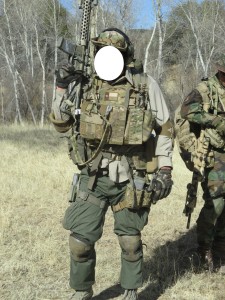 Firstly, thanks for sending them in. My comments are as follows:

1) If that works for you, then there is no further need for discussion.

2) In the spirit of further discussion, I can see how the two high and tight drop leg rigs are a replacement for a light battle belt. By which I mean a battle belt that is just hip pouches, and no rear pouches. If that works, and the high and tight carriage method of the drop-leg is good, then fine. Point conceded.

3) A classic light infantry battle belt consists of the hip ammo pouches and also the rear sustainment pouches. It needs a harness/suspenders to make it work. It is a decent load, maybe 20-25 lb all up, and removes the need for the ‘rack’ of magazines as shown in the photos, worn across the belly.

4) In my opinion, the load on the PC, in particular the rack of magazines across the belly, does not look comfortable and does not look ideal for the activity engaged in, i.e. rural fire and movement. I would prefer, if wearing the PC, a light load on it, maybe just 4 mags across the front to reduce weight and bulk. Put the rest on the battle belt. Whether you have pouches directly on the battle belt or rig up a drop-leg system off it as this fella has done, that is not really important, just  a detail of preference. For example, I have seen full battle belts with suspenders, but also rigged up with a drop leg holster, either off the battle belt or separate so it stays on when the belt is off.

5) Really, this system is not so far different form my FLC/slick plate carrier with drop leg holster system, which is fine but never as good for rural prone operations as a battle belt. Back to what I have said before, I think the way to solve all this is with a battle belt, slick plate carrier, and a lightweight chest rig that goes over the PC. This gives you optional components but also the ability to carry a significant amount of gear for sustainment.

Useful stuff. Thanks. Comments open! (Soon we will have a forum for free discussion of this stuff)

Edit: is there a belt in the third photo that is not worn in the two action shots? And if so, was this the one taken off due to it being a pain in the butt? A battle belt without suspenders, not really meshing with the rest of the system?