Peeling:This simple but highly effective technique is mainly used to move to the flank; elements or individuals are in line facing the enemy threat and will ‘peel out’ to either the left or right. This is a good technique for moving along a linear feature, such as a road or ditch, while producing maximum suppressive fire. It is better to ‘peel’ than to simply get up and go.
The reason I say that peeling is mainly used to move to the flank is because for moving forwards towards the enemy or moving backwards away from the enemy  generally the most appropriate method is to use simple fire and movement, otherwise known as bounding over-watch. It is up to you to take your team/formation and work through ‘actions on’ utilizing these methods to suit your particular formation/ team/ environment/ situation.
Peeling can also be used as a method of moving to the rear (i.e. if the unit was contacted from the front while in a file formation), but in that case because the team will be in line (single file or file) the firepower generated to the front is limited. However, it’s very useful if for example there are enemy on both sides of the road/trail; the technique can be used from the file with individuals peeling from one end of the formation, down the center (‘down the tunnel’), to the other end, thus moving the formation out along the linear feature while generating maximum suppressive fire towards the enemy on both sides: this is known as a ‘center peel’.
With the peel, when the formation needs to move right, individuals or elements will move from the left side, behind the formation, and peel back in on the right. The opposite for moving left. As each individual passes the next man, who will be providing suppressive fire, he shouts something along the lines of “Move!” or “Last man!” or kicks his foot etc., in order to ensure that the next man knows to move.
The technique is a flow of constant fire and movement. It can also be used, for example, as a way of moving to a flank out of an area of open ground to cover, when contacted by an enemy to the front.
Don’t confuse the use of techniques such as this with excessive expenditure of ammunition, which you may have seen on ‘youtube’ or similar. Peeling does not require massive firepower. The idea is to return fire to suppress the enemy to cover movement. You could do this with bolt action rifles if you had to, so long as you made your shots count. The basic principle is the same. 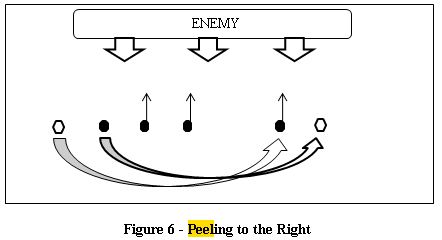 As an example, the center peel is an one of the drills that you can do for a ‘contact front’:
With the center peel method all the patrol members step to the left or right accordingly to create a file, or tunnel formation. This will only allow the front two riflemen to engage but it is useful for withdrawing along linear features or where fire is coming in from the front but also to the front and flanks on both sides.
The front people will return fire and then in sequence they will turn and run through the center of the tunnel, peeling back in at the other end. This allows the next front people to fire and the process will continue with the tunnel turning itself inside out all the way back to a suitable rally point. It is effectively a peeling technique with two lines.
The fire and movement method would be for the front team to return fire, with the two rearmost riflemen of that front team stepping out to the sides to allow them to fire: effectively ‘getting on line’. These two pairs would fight back utilizing fire and movement. The rear team would take up security positions and then begin to move back, utilizing bounding over-watch, to secure a rally point. 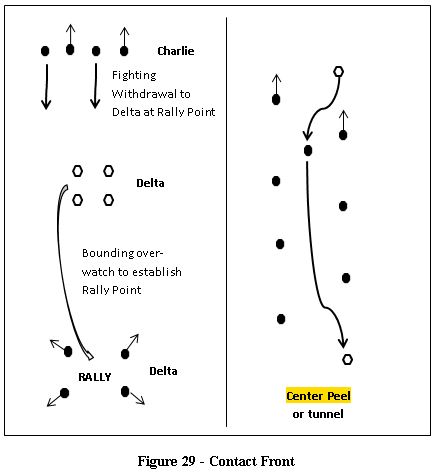 This video below contains a practical demonstration of some of these techniques, if you move to the second half past the vehicle drills you will see fire and movement and towards the end there is a peeling drill. In this case, it is in response to a “Contact Right” after the team ‘gets on line’ to face the threat to the right and then peel back to the vehicles. There is no center peel in this video.
In the video below, Navy SEALs demonstrate a center peel, with massive expenditure of ammunition  Clearly  they will need a fast resupply in order to continue. For a prepper or Resistance fighter, this sort of ammunition  expenditure is prohibitive  and also arguably gratuitous and lacking utility. What the SEALs are doing is trying to generate massive suppressive weight of fire in order to overwhelm the enemy and let their smaller team escape (break contact). That is all well and good, so long as the fire is accurate enough to actually suppress the enemy. There is a balance between weight of fire and accuracy. Draw your own conclusions!
This information is extracted in part from my manual ‘Contact! A Tactical manual for Post Collapse Survival’ and is also incorporated into the novel ‘Patriot Dawn: The Resistance Rises’. Required reading for the difficult times we are facing! 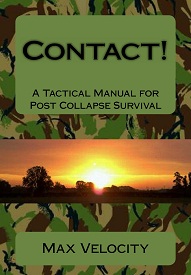 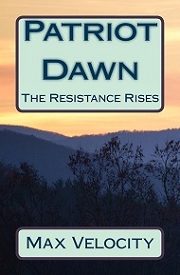