I updated the description information for ‘Patriot Dawn: The Resistance Rises’ to try and prevent any progressives buying it by mistake and then getting all upset and writing me one star reviews on Amazon!:
The United States has descended into Civil War.
The storm was rising for some time, a Resistance in the hearts of American Patriots to the strangulation of liberty by creeping authoritarianism.
The scene was set. It just took a little push. A terrorist attack on the United States leads to war with Iran, followed by collapse, as the economy goes over the cliff.
The final blow is a widespread opportunistic Chinese cyber attack, taking down the North American Power Grid.
From the ashes, the Regime emerges. Liberty is dead.
What remains of the United States of America is polarized.
The Resistance Rises.
Jack Berenger is a former Army Ranger Captain, living in northern Virginia with his family. Following the collapse, they fall foul of Regime violence and evacuate to the farm of an old Army friend. Jack is recruited into the resistance, to train the fledgling forces in the Shenandoah Valley.
The fight begins.
Resist.
Additional Information: Max Velocity is a tactical trainer (see Bio and maxvelocitytactical.com) and the author of ‘Contact!: A Tactical Manual for Post Collapse Survival.’ The concept of ‘Patriot Dawn: The Resistance Rises’ was twofold:
1) To write an exciting novel telling a survival and resistance story set in a near-future fictional scenario of both societal collapse and Regime tyranny.
2) To use the story as a ‘vehicle’ to bring to life tactical concepts from the manual ‘Contact!’ The story is thus written with ‘tactical fiction’ story lines embedded within. The subjects covered include tactical self-defense from individual through family to group level and also tactical techniques used by the resistance force battling the tyrannical Regime.
The intent is therefore to both entertain and to teach; to convey useful knowledge to the reader. The novel is written from the viewpoint of American Patriots fighting a fictional tyrannical Regime, with the aim of restoring the Constitutional Republic. There are therefore some basic political assumptions, such as tyrannical/authoritarian/statist/socialist big government = Bad. Constitutional Republic = Good.
The scenario is realistic but not necessarily exactly predictive; it is a setting for the story line. If you are a Patriot and you are interested in potential near-future scenarios and how a civil war may look, plus you would like to a get a realistic view of resistance tactics and real combat, I urge you to read this novel. ‘Patriot Dawn’ is an excellent companion read along with ‘Contact!’
http://www.amazon.com/Patriot-Dawn-The-Resistance-Rises/dp/1480139688 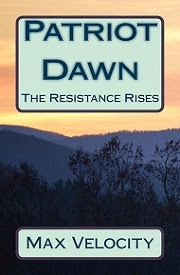