I have just returned from the Combat leader Class (CLC). It was a great class and I hope to get in some student reviews to attest to that. I had taken the leap into the void at fairly short notice prior to the class, but not without research, to pull the trigger and ditch UTM in favor of AirSim. It worked to great effect.

The one performance issue identified with AirSim is cold weather performance. We had one day where the weather was  in the 30’s, but with some forethought we avoided any issues. In fact, one of the main problems is a training issue anyway, which is the tendency with both AirSim and live fire, to rapid fire (stream fire) and thus run out of ammunition / over-cool the rifles in cold weather. With more forethought and knowing that cold weather is ahead, there are various measures that can be taken to work around cold weather issues. We will be more prepared next time.

Other than that, we were making more effective hits at longer ranges with AirSim that we ever have before with UTM. This enables small unit tactics to run better, when friendly forces were actually able to suppress enemy positions effectively. It is altogether a superior training aid. 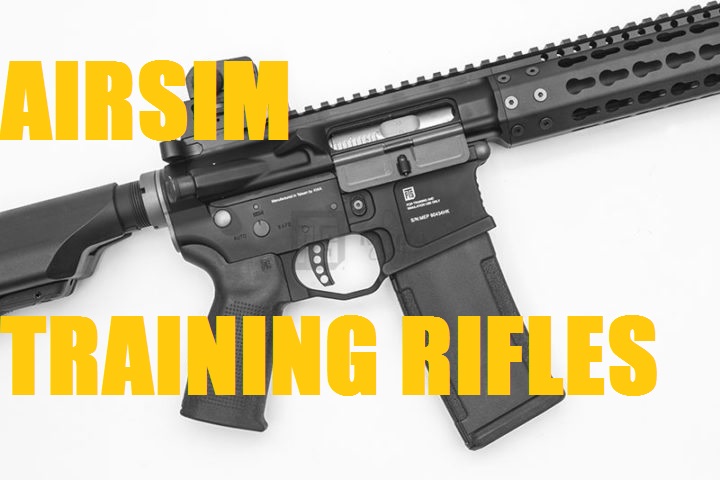 The move into AirSim as an aid to professional tactical training has opened up all sort of angles. We have an armory of KWA LM4 RIS AirSim rifles up at the VTC now. But the PTS AR-15 was attested to being a superior rifle, and it behooves students to purchase their own, make it a clone of their live fire rifle, and thus have a rifle to train with at home for force on target and force on force. After an initial modest investment, you can practicably train for free with the cost of gas and BBs, and thus you avoid the prohibitive cost of $1 per round for UTM, and you get better performance with a rifle that manipulates just like your AR.

Please note that I am not saying give up live fire training, but simply to utilize the AirSim for the specific training benefits, as appropriate.

MVT will be going to AirSim for force on force training. It is going to make those classes a lot more affordable, compared to the $1 per round for UTM. Unlike UTM, AirSim is not restricted and thus the motivator for buying your own rife and cloning your live fire weapon, is the ability to train with it at home, both in the backyard and also for your own force on target / force on force with buddies, to supplement the professional training experienced at MVT.

As an example of this, having recently run a HEAT 1 class in Idaho, I will be going back to run another in spring 2019. This will create a pool of people trained to a basic level. In the fall, I will be going back for another 6 day mobile class. The specific curriculum for this was under discussion at the CLC (the organizer was at the CLC), but it was agreed  to run the latter four days of the class as a modified CLC using AirSim equipment purchased by the students. This saves both live fire ammunition and target costs. The initial intent was to run the first two days as a Direct Action class (slimmed down HEAT 2 incorporating an ambush day and an attack / raid day). The next issue encountered was the lack of pop-up targets to run iterations such as ambush. The solution after discussion was a brainwave – they will have enough students to run a rotating OPFOR, and thus these two class days (as opposed to scenario based force on force) can be run with AirSim against a controlled OPFOR. This is a stroke of genius. Thus we can control this by, for example, when an attack / raid is initially being practiced during the teaching phase, the friendly forces will not die if struck in the assault, it will simply be an AAR point. As the drills are mastered, we can add a greater level of free play force on force. This shows the flexibility of AirSim. Also, objectives upon which to conduct the training exercises will not be restricted by suitable backstops etc as per live fire, but can take place in realistic locations.

On the whole, on the CLC, AirSim was a much more effective training tool, despite a couple of cold-weather related issues. It was more effective at simulating a close combat environment, and allowed the squad to far more effectively bring suppressive fire down onto the enemy, indeed actually ‘killing’ them at range many times through holes in bunker walls, windows etc, where UTM always fell short and never got the job done, thus creating far more friendly force casualties.

Note: MVT can sell any of the KWA / PTS rifles available, it is simply that at this time the store only includes recommended rifles for MVT training. As time goes on, the store will be built out. We can also offer AK-74, and please contact with inquires about any pother KWA / PTS prdoducts.