The purpose of this planning exercise is for you to conduct patrol planning for an Observation Post (OP) patrol against an enemy location. You can either complete this exercise privately or preferably post your solution on the MVT Forum. Include maps along with your patrol brief. The information contained below should consist of enough of a reference guide for you to complete this exercise.

If you are going to conduct surveillance/reconnaissance you have to develop your skills and train for it. It is a detailed process of planning and preparation in order to allow you to gather the required information without compromise.

This is a similar scenario, but not the same, to that contained in ‘Patriot Dawn‘:

It is now SHTF, and has been for some time. Following a cyber-attack On the North American power grid, society collapsed. In the aftermath, Russian and Chinese forces invaded North America. You are part of a Resistance Company that is operating in and around the Shenandoah Valley, VA. You have a Resistance base located in the George Washington National forest, to the west of the Shenandoah Valley. You have been tasked to conduct a four man Observation Post (OP) patrol to get eyes on the Bridgewater Airpark, to be known as Objective Wasp. 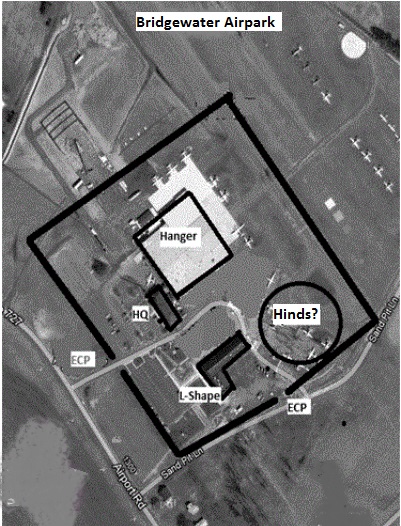 Above: Diagram showing the HESCO barrier around the Airpark, as it appears in the scenario

You were given the following Warning Order (WARNO):