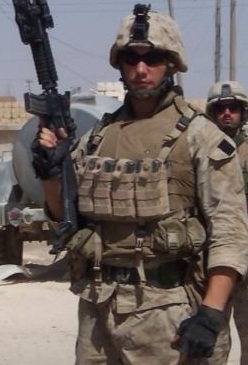 Several significant questions have been raised as of late about fire and movement.  On the forum, Buddy Team Usage was the title of a very good question by Mark9mmp.  Many of these questions are also brought up during Combat Team Tactics (CTT) and Combat Patrol (CP), and are brought up repeatedly.  The best way to answer many of these questions is with two policies that should both be continuously practiced during fire and movement.

The first question is:

What to do when you and your battle buddy are separated by another battle buddy pair because you have each taken cover in opposite directions?

Team Integrity is paramount in Small Unit Operations and every attempt should be made to keep teams together.  Team integrity is accomplished by being constantly aware of where your buddy and your team is, and what they are doing.  SCAN!!! …anyone?  Basically it is staying with your battle buddy and with your assigned team. (See post on ‘Buddy Position Awareness‘).

Now if your buddy goes the “wrong way” you should always move to stay with him.  (unless he is obviously doing something suicidal or incongruent with the mission)  Firstly, he may see something you did not, so who are you to say he went “the wrong way”?  Secondly, even if he went to the “wrong” side, you both still have a much better chance of coming out victorious if you work together and avoid getting separated.  So who decides?  Whoever hesitates, follow the other guy.  Right or wrong someone has to make a decision, and the other guy has to follow.  Which way you go is up to the man who acts first.  The other guy has got to follow.  Remember too, a bad tactical decision won’t necessarily kill you.  Hesitation under fire will.

What If it happens anyway?  What if, I blue screen and we get separated anyway?  Okay, then we fix it.  If you and your buddy end up on opposite ends of a four man team, with the other buddy pair in between the two of you, at some point one man does a quick peel to meet up with his buddy.  Simple.  But get there.  Never violate Team Integrity, and if you do, fix it as soon as possible.  Shit happens.  But do NOT just start making up new buddy pairs and teams on a whim.  The only time this is acceptable is in the case of a casualty. Trading buddies on the fly causes a total sh*t storm of disorganization and confusion.  You will see why below…

The second question is:

If we are out on patrol and suddenly we are attacked, how do you know to bound forward or bound back? How do we know what to do?

There are several answers to this, and all are valid.  Alumni will remember that in the CTT and Combat Patrol classes, you will already know if you are advancing, falling back, or maneuvering on the enemy position with a support squad laying down covering fire is based on the drill.  The action is pre-determined in the pre-patrol briefing.  This is mostly done to focus on teaching basic execution of fire and movement.  This however is applicable to the real world.  If you have a four man team and you run into unexpected contact, it would be wise to have a standing order to break contact every time since you are a small force.

The other way is the Combat Estimate, and this is done by the unit’s tactical leader.  It is a decision making process by which the leader makes the decision to break contact, assault, pursue by fire, or any other various actions.  The Combat Estimate is beyond the scope of current course offerings at MVT and will be a part of a Small Unit Leaders course.

*Note: there are numerous posts on the Combat Estimate on this blog. Search ‘Combat Estimate’ in the left search bar and numerous entries will come up, including the series of free student planning exercise and solutions. Here is a suggested example: ‘Re-Post: Tactical Use of Terrain.‘*

However, a big part of how a good tactical leader communicates actions to his team or squad mates is through Implicit Communication also known as the “Fighter Leader” concept.  Simply put it is leadership by example.  But it is slightly more nuanced than the cliché suggests. Say everyone has conducted their RTR’s AND have gotten relatively online.  If the team leader bounds forward, guess what? You are attacking.  If the team leader bounds back, you are breaking contact.  If he moves uncomfortably close to you (very little dispersion) he wants you to shift in that direction on your next bound.  If he is moving too far away (too much dispersion), he wants you to shift towards him on your next bound.  In this way, the tactical leader can convey how he wants his unit to react based on where he positions himself or how he bounds.

So let’s put this all together.

Your four man team is on patrol in your AO.  Crack, Crack, Crack! You come under surprise contact from multiple positions with small arms.  The volume of fire is intense.  Everyone individually conducts an RTR, then each adjust their positions as necessary to get online in the direction of contact.  Now you wait on the leader to conduct his combat estimate.  He shouts a command but you can’t understand it. You see him dash into a bush.  Your buddy is in between you and him.  Suddenly your buddy turns and bounds to the rear.  You’re breaking contact!  You make a bound, and hit the dirt just as several rounds snap through the brush above.  (You make a mental note to berate your buddy for forgetting to communicate.  Max isn’t here to yell at him.)  You notice a muzzle flash under an angled log.  Your dot settles on a black boot just past the upturned root ball…

Your homestead was unsuccessfully raided at dawn.  The attackers were beaten back without any loss of life or significant damage to the property.  As it gets lighter your team moves out to conduct an assessment.  You find several hastily prepared positions.  Of note is one position with some very dark blood with green fluid in it.  The old man says this indicates one of the raiders was gut shot, and the consensus is to see if you can find him.  By the amount of blood, it doesn’t seem like he can get very far.

Your team begins tracking the wounded individual.  You notice two different types of tracks due to tread differences, one of which seems to be shuffling his feet.  Someone was with him.  About 300m away you find a spot where the enemy stopped for a time, attempting to dress the wound.  There is a large pool of blood and some used bandages at the site.  A set of prints moves off to the south and is leaving a consistent spotting of blood along the way.  It seems the wounded individual is now alone.

Crack, Crack, Crack… everyone RTR’s.  The fire is continuous but seems to be coming from one position.  Everyone is now online.  The leader is 8 yards off to your left.  He bounds forward, and his buddy joins him.  They are alpha. An assault, payback time!  You and your buddy (bravo pair) bound forward.  This time when alpha bounds, instead of going forward of your pair, the team leader bounds to a position online with you and only two yards away.  That’s too close.  He’s getting in your lane.  Oh sh*t! He wants me to push to the right on my next bound.  You bound forward at an angle, and yell to your buddy “push right!”  Alpha now bounds forward of you again, this time staying in their new lane.  A shrill voice 20 yards ahead screams “Don’t shoot! I give up!”….

Since CTT and Combat Patrol focus instruction in becoming the “warrior” there is the component of leadership which is important, but outside the scope of these courses.  Being a warrior is one thing.  Leading a group of warriors in the heat of conflict is quite another.  Long story short, the step that is not seen in CTT and Combat patrol is the step of a Combat Estimate, and that call is for a tactical leader to make, the one you have chosen to follow.  You chose this person, and they decide if you go forward, pull back, peel etc when the bullets start flying.

Now, remember that Team Integrity thing back at the beginning of this post?  Yep… it’s pretty crucial.

Max Adds: The full detail on the Combat Estimate process, explanation, with aide-memoire, is included in ‘Contact! A Tactical Manual for Post-Collapse Survival.’ A full orders process is also included.

To add to what Lee says: