I posted previously on body armor and gear: 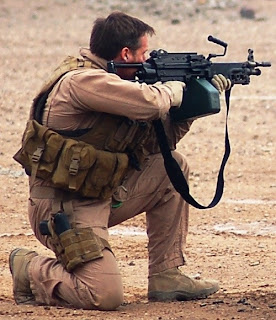 I’ve been giving it some more thought and reviewing my own tactical load carry set-up. You all know that I have a military and security contractor background. That has taught me, perhaps unhelpfully,  that a full set of body armor is good; a full rig of soft armor inserts and ballistic plates. It is heavy and gives you a permanent sweat soaked undershirt in any kind of warm weather.

However, as discussed previously, the threat in a collapse/civil war situation is different. Mainly, we are not facing IEDs etc. The main threat is from rifle rounds. Pistol rounds are a threat but in general a pistol is not accurate in most people’s hands. The soft armor in your body armor will only stop handgun rounds and shrapnel.

Full body armor is also restrictive and heavy. Heavy is something you can’t get away from when you are carrying ammo and all that you need to fight. But there are degrees of it.

It comes down to a risk assessment. Yes, you can get shot by a handgun and you can also be shot by a rifle in one of the many places where your plate does not protect you. There is no magic pill for this, firefights are dangerous. As an example for the thought process, look at armored vehicles:  they are designed on a balance of firepower, protection and mobility. You should adapt those principles to your set-up. If you reduce protection, you increase mobility. There is no point being protected if your physical fitness does not allow you to move about wearing your heavy full gear. You will soon be exhausted,  you will cut corners, you will get tired/lazy/complacent and you will expose yourself.

There are a couple of other considerations in a civilian environment. Firstly, you want a rig that is practical and that you will actually wear, even when it is hot, for extended periods of time as the collapse or civil war draws out.

It was also brought up that wearing a full set of body armor may make you feel less vulnerable than you are. This may be true, particularly when only the plate portion is giving you ballistic protection from rifle rounds. Wearing a full heavy rig was always for me a sort of comfort blanket, a coping mechanism  When you are going out everyday facing threats from IEDs and small arms fire, putting on the heavy gear was a sort of psychological comfort, you could sort of persuade yourself, like a ritual, that it would all be OK. Because otherwise, you wouldn’t want to go out; and the other option was insanity!

So I am putting down here a recommendation for a way to rig your gear. Take it, or parts of it, or leave it. This is not about makes or brands of gear, just how to rig it up.

1) Battle Belt: This is your basic load. Get a tactical belt and one of those padded battle belts with the MOLLE attachments. Rig it up simply with perhaps three double AR-15 magazine pouches on the one side, and your handgun on the other. Have a triple handgun magazine pouch and also a rolled up dump pouch on the back. Keep pouches off your back so you can sit in a vehicle. You can put other items on, such as a knife or multi-tool or whatever. CAT tourniquet.  Just keep it light. This should be a comfortable battle belt that forms the lowest line of your gear, it can be worn at all times and with your rifle slung you have enough ammo to be going on with, plus your handgun as backup.

2) Plate Carrier: Just get a lightweight plate carrier. Simply have front and rear ballistic plates, no soft armor. The carrier should have enough real estate on the front to fit four double AR magazine pouches across the front.  Keep this rig light with perhaps just a few ancillary pouches/CAT tourniquet You can put an IFAK on this PC, or you can put it in a grab bag if it gets in the way (or put it on the battle belt). This plate carrier will give you the protection from rifle rounds that counts. It will also be relatively lightweight and allow freedom of movement  It won’t be a complete chore to wear, and will allow you to sweat and lose heat where the plates are not. If you desire, you could also put side rifle plates on a  rig, if you had the right rig and wanted to. Put a camelbak on the back if you want. Just don’t overload it! This rig will be lighter and make you feel less protected. Good! It is also low profile enough to be worn under a jacket or shirt if necessary, for a little bit of profile reduction.

The combination of a  battle belt and a plate carrier gives you the versatility to adapt your posture to the situation, ramping up and down your readiness against the perceived threat.

3) Grab Bag/Daypack: This can be in the form of a satchel type ‘man bag’ or a daypack. I prefer the daypack, it sits better on you and is better for any period of time dismounted  You can keep this daypack in your vehicle, on your back if you are patrolling, or sitting next to your stand-to position at your retreat. The type of thing that you will carry in the daypack is not limited to the following: ammo resupply, water, medical, food, ancillaries incl. weapon cleaning kit. Batteries, night vision or thermal if you have it. Spare clothing: socks, wet/cold/hot weather as appropriate. Pack for the situation and mission. But don’t let it get excessive: its not your complete ‘bug-out bag’, it just contains some basic mission essentials.

Physical Fitness: you may note with some sarcasm that even though I say ‘light’, I am still talking about a rig with ballistic plates, 14 rifle magazines, handgun, three handgun magazines, and that is not to mention putting the ‘go-bag’ on. But it’s relative  You could be carrying much more, and wearing much more restrictive full body armor. Bottom line, reality check, is that you need to have a basic level of fitness if you are contemplating taking part in a firefight. This is not about sitting on the front porch, swilling beer and taking the occasional pot shot. So yes, I mean ‘light-er’ than it could be, but you must train to a decent physical level where you can move around in this gear.

Of course, you don’t need to have any ballistic protection at all. But I highly recommend it , if you can shell out the cash for a couple of ballistic plates to put in a PC. If you can only afford the PC outer cover right now you can rig it as a tactical vest and if you are still standing after that first firefight, there may be some freebie plates  lying around for the taking.

Using ballistic plates will significantly reduce the risks of a penetrating wound to the torso HERE, which will be beyond your basic lifesaving ability to do anything for. If you can get them, do.