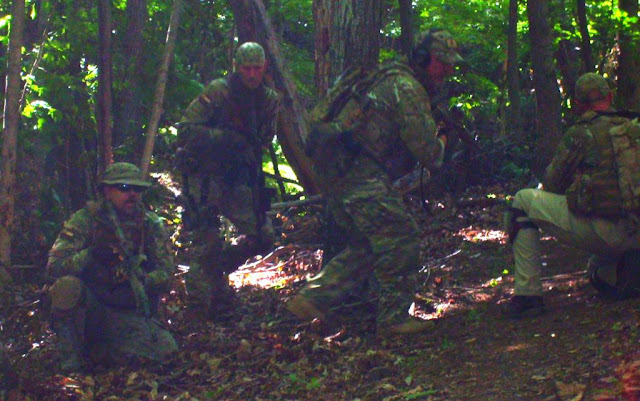 Max Velocity Tactical
Combat Rifle & Contact Drills – May 25th/26th
By
Team Georgia
Background:
Team Georgia was made up of four good friends from the state of Georgia, as you would expect, who have been training together for about five years.  All of our ‘tactical’ training had been in the realm of Airsoft Mil-Sims, Appleseed shoots, and 3-gun/IDPA type events. Our ages ran from late twenties to early fifties with each decade represented. We were in decent physical shape, but are by no means athletes. There were a lot of unknowns for us going into the class mostly centered around how well our ad-hoc training would translate into ‘real world’ training. Three of us ran AR-15s (PSA, Stag Arms, Bravo Company) with plate carriers and steel plates; the last ran a Yugo AK under folder with a Beez chest rig.
Day 1
We met up at 0800 and followed Max to the training site’s parking area; Max provided transportation for people and gear for the final 800m to those who wanted it.
The first half of the morning was spent on safety rules and shooting techniques. Though these things are a necessary part of ‘Introduction To’ type classes and always a good reminder, it is still mental Ambien for those who have heard it many many times before. What made the whole segment enjoyable were Max’s British accent and his ability to go off on very informative tangents.
The second half of the morning Max covered reaction drills; this was where things started to get interesting. The tactics that my friends and I use are a result of an amalgamation of diverse sources. Luckily we were pointed toward Max’s books Contact and Rapid Fire which we added to our resource pool. Everything Max covers in his class is covered in his books, so we were pleased that what we knew in principle was easy to follow when explained on a dry-erase board.
We noticed that Max used different verbal commands from what we were using. During our lunch we decided to adopt some, but retain others and see what happens.
After lunch we began the crawl/walk/run approach to contact drills with individual dry fire then live fire which led to buddy team dry and live fire. Max did a great job with the field training and we were impressed with his ability to tailor his individual instruction to individual needs. He was eager to answer questions, spent time with those who needed extra attention, and didn’t over explain ideas to those who exhibited a good understanding.
The individual dry fire drills on Range A, a mostly open area with good visibility, were the first real chance to get to know the other attendees. We were impressed by the commitment that each one exhibited as patriots and we were reassured in that there still are so many dedicated Americans. A good cross section of ability was represented. For some, this was their first time really giving their kits a work out or first time not on a square range. As far as we know there was not a single negligent discharged during the entire course.
The adrenaline started pumping during the individual live fire drills. Max made sure everyone proceeded at a pace they were comfortable with and one that kept safety in mind. He made sure that we paid attention to the ‘T’ in the RTR drills and gave great feedback after each run. The pop-up targets were the icing on the cake.
Next came buddy team dry fire contact drills, since Team Georgia had trained together before picking a buddy was easy. What was beautiful to see is how easily the individuals were able to pair up. Having seen how professionally each individual conducted themselves during the singles drills added a level of trust that would not have been there otherwise. The buddy dry drills went off without a hitch with contact showing up on either the front, left, or right.
The buddy team live fire drills were where Max’s experience and professionalism really shined. He kept full control over each run and made sure to reiterate safety rules. This drill is also where we were impressed with Max’s level of understanding. Earlier in the day we were instruct to call out ‘stoppage’ when we have a malfunction or need to reload. Our team has always called out ‘reloading’ for reloads, ‘malfunction’ for malfunctions, and continued to do so during the course without a comment from Max. It may seem like a small thing, but it shows that Max is more concerned with results than us following him verbatim.
Everyone really brought their ‘A’ game to the class which allowed us to run a four man contact drill. As normal, we started with a dry fire drill where muzzle awareness and safety was again drilled into us. We then got the opportunity to do a four man live fire drill.
The end of Day 1 ended with a short talk on TC3 which was requested by the class and Max was gracious enough to teach. 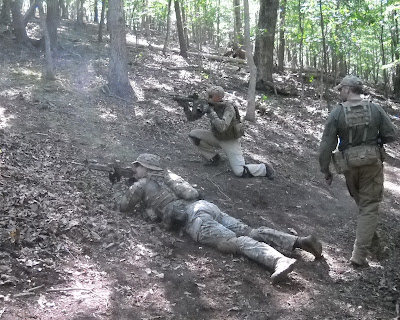 Day 2
Day two started like the previous with movement to the training site and a review of the safety guidelines. Everyone was looking eager and seemed no worse for wear.
Each buddy pair made another live fire run on Range A. One of the things we appreciated is Max’s ability to expound on the ‘whys’ to all that we were doing. It is easier to understand and adopt an SOP when you can see the idea behind it.
After a short break we all headed up to Range B for the much anticipated ‘Jungle Walk’ which consisted of multiple pop-up targets in partially concealed positions in a nicely wooded area. As opposed to the drills on Range A, Max did not call out contact directions for the shooters unless the shooter had already walked past the popped-up target. Another nice addition to the ‘walks’ was the scenarios for each walk that Max gave us.
We started with individual live fire drills. The Jungle Walk scenarios created what was essentially a 360 degree battle space. The terrain was wooded hills with a pretty clear trail for the ‘Walk’. Having to move relatively quickly while keeping an eye out for Ivan was tricky, but nerve rackingly fun.
After everyone was done we broke for lunch. It was at this point the members of the team from Georgia really started to ‘feel’ it. We were amazed in how all the aches and pains disappear when you hear someone yell “Contact!”
We then headed back to Range B after lunch for the buddy team live fire Jungle Walk. This is where the 360 degree space truly shined and hearing “Contact Rear!” in an unnerving experience. As always Max was there to make sure we followed safety procedures as well as tell us what we did right and explained what we could have done better.
The final run consisted of four-man live fire Jungle Walks and we really want to thank Max for this. The piece of mind knowing we were able to perform together at such a level was priceless and has deepened the trust that we have for each other.
As a final point, Max knew that everyone was getting fatigued at the end of the second day so he made sure to let us know to be extra aware of safety and our surroundings.
Conclusion:
The lessons we learned were not expected in that things that seemed irrelevant on paper end up being really important in practice and we were happily relieved that our gear continued to perform as it had in the past.
Max provided a top shelf tactical training package and I highly recommend it to those of all experience levels. Team Georgia will be returning to West Virginia as soon as we can.
Thanks for having us Max!
Team Georgia: Ed & Eric & Richard & Jim 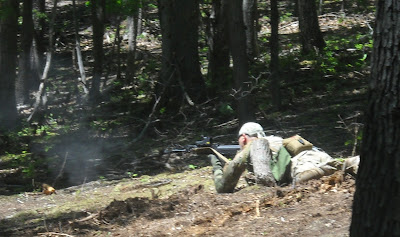