Jack Donovan: All Training is Sacrifice

This post is not by me. This is entirely copied from the Jack Donovan Blog: ‘All Training is Sacrifice – STW Episode #18.‘

I have re-posted this because I found it to be an excellent article, and very much in line with what I have always said about ego being an impediment (the greatest) to effective training. He writes it far more eloquently. A forum member originally posted this on the MVT Forum, which is how it came to my attention.

Don’t kill your ego. Sacrifice Yourself To Yourself.

Bruce Lee wrote that: “Punches and kicks are tools to kill the ego.”

It’s become a training cliche. Whether you are training with weapons or weights, someone will eventually tell you that your ego is your enemy.

The problem with that is, your ego is also — you.

People tell you to kill your ego because they want you to get out of your own way. They want you to stop acting like you already know everything, because by seeking out training, you’ve already acknowledged on some level that you don’t know everything.They want you to leave your status or perceived status in the world behind, so that you can submit to the learning process as a student — with no chip on your shoulder and nothing to prove.

They want you to train with humility and avoid hubris — an ancient Greek concept describing a man who overestimates his own power or status and brings himself into conflict with natural law, which is, from a mythopoetic perspective, the will of the gods. His hubris eventually leads to his downfall. In the case of training, a man’s hubris makes it more difficult for him to learn and grow as a practitioner — his hubris becomes the cause of his stasis.

Conceit, hubris, arrogance…this kind of ego-tism is only one negative connotation of the word ego, which also describes a much broader concept of self.

“Ego” is actually a Latin word for “I,” sometimes translated as “I, myself.”

The Twentieth Century use of “ego” in English to mean “self” stems from the psychoanalytic work of Sigmund Freud, who used the simple word “Ich,” also “I,” in German. This seems less editorial and more in keeping with the Latin “I, myself.”

In the Freudian model, the super-ego, or Über-Ich is the ego above and beyond the self. It’s the part of the conscious and unconscious self that absorbs and processes collective identity as well as the demands and the norms of the group, culture, society — tribe.

If you train on purpose — if you train because you want to train — your training is driven by the ego.

Voluntary training is endured in the service of the ego, with the ultimate purpose of validating the ego, increasing self worth and improving social status. You train because you believe that you are good enough to be better, and worth improving. Or perhaps you see yourself training for the sake of others, for the group, to protect them or fulfill a role you believe you are good enough and able to fulfill. If you train for honor — to be worthy of your peers, your ancestors, your gods — you train because you believe yourself to be capable of honoring them. (1) This too, is a product of your ego.

The ego, in both the broadest and the psychoanalytic sense, describes your conscious mind. It makes up the bulk of your “I” or “Ich.” Your ego is what separates you from dust in the wind. It’s the part of your mind that is awake, sentient, self-aware. To whatever extent you are the master of your own fate and the captain of your soul, the “you” is your ego. It is your ego — inseparable from any knowable version of “you” — that perceives and processes information about the world around you, evaluates that information, and selects a direction or course of action. It is the ego that manifests will.

Men train in the service of a higher version of the self, imagined and willed into existence by the ego. Training is self-creation — becoming — not self-destruction.

The aspects of the ego which must be destroyed or contained in training are self-imposed scripts and limitations and habits which may impede the progress of your self-development.This is a pruning of the ego — a sacrifice of old growth to stimulate new growth.

This pruning may be painful as you clip away or brush aside cherished ideas about the talents or even perceived limitations that you believe make you special.

People seem to take almost as much pride in the untested reasons and rationalizations they’ve dreamed up for why they can’t learn in a certain way or do a certain thing as they do in untested delusions of grandeur — especially in this slave age that prefers victims to victors. Often, their perceived limitations are like those of a boy who believes he can’t swim or doesn’t like swimming because he fell in a pool once and didn’t know what to do.

The world is also full of men who want to tell you how much they used to lift or how fast they used to run, before they got “old” or suffered some injury that elite athletes work through all the time. “Limitless potential” is a fantasy, but most people set their own limits long before they come anywhere close to the top end of their potential.

While some believe they can’t when they can, many others believe they could when they probably couldn’t. Millions of doughboys overestimate their ability to fight because they won an altercation in high school once — or worse, because they’ve watched a lot of videos of fights and think they “have a pretty good idea of what they’d do.” You can find them second-guessing professional fighters and quarterbacks in bars and in front of television sets all around the world.

To truly become the kind of men who know they have the ability and the conditioning to do what these men merely believe they can do, these couch captains would have to abandon their self-authored fictions about themselves. They would have to go through a process of failing and looking stupid before they even started to look like they knew what they were doing — much less became truly capable of performing as they’ve imagined.

To train successfully, you must be willing to sacrifice portions of your present self-concept to a future, higher version of the self created by your ego. It is your ego, god-like, that is initiating and driving the process of self-transformation and becoming. This process requires you to exchange something you have for something you want. Nothing worth anything is truly free, and everything worth having requires some kind of sacrifice.

Instead of “killing your ego” — instead of fighting yourself — approach training as a sacrifice of a part of yourself to a higher self.

This is the way of Odin.

Odin is usually depicted with a missing eye, because he sacrificed one of his own eyes to the giant Mimir in order to drink from his well of wisdom. He sacrificed a portion of his superficial sight for a deeper, higher way of “seeing.” .

In another tale, Odin disguised himself as a farmhand and labored through a growing season, doing the work of nine men to gain access to Óðrœrir, the mead of poetry and inspiration. To get the mead, the hooded wanderer eventually had to seduce the giantess Gunnlod, whose name translates roughly to “invitation to battle,” and slam her out for three nights in a row. (It must have been a rough three nights.)

Odin is perhaps best known for his self-directed ordeal hanging from the world-tree Yggdrasil, wounded by what was (presumably) his own spear. After hanging without food or drink for nine nights, the runes reveal themselves to him, and from them he gains magic and a greater understanding of the universe.

While this scene is superficially Christ-like, and it makes sense to wonder how much Christian imagery and intent colored any of the surviving stories of pre-Christian European pagans, the stark difference here is in Odin’s motivation.

The spirit of Odin’s ego-driven self-sacrifice is captured in the following lines from the Hávamál:

a sacrifice to Odin

The Hávamál is known as “the sayings of the high one” — sayings attributed to Odin himself. The majority of the first 138 verses pass down practical advice for living, as if from a grandfather or a wise old king. These lines about the sacrifice of self to self are found in a distinctive portion of the text that reads as if the speaker has slipped into a trance. In this dream state, the high one recalls his initiation into the mysteries of the runes, through starved meditation, while hanging from the world tree (2):

Odin’s martyrdom is a self-martyrdom, done in the service of no one but himself, for reasons of his own. He sacrifices himself to reach a new level of understanding, and through that understanding becomes a higher version of himself.

Odin acknowledges that he doesn’t know everything, and instead of sitting on his throne sipping mead and marveling at his own creation, he pushes himself out of his own comfort zone and forces himself to do what he believes to be necessary to know more and become better. The Allfather could easily compare himself to other gods and humans and all of the lesser creatures, and be satisfied. But Odin doesn’t measure himself against others, he measures himself against himself.

The opposite of Odin wouldn’t be a giant or a dwarf or a man — or even the wolf who swallows him and ends his life. Odin’s opposite would be the person who tells you to “just be yourself” or to “be happy just the way you are.”

The story of Odin is a challenge and a reminder that no matter who you are or what you’ve achieved, you can do more, learn more — you can make yourself better in some way.

The practice of Odinism requires no worship of Odin with kneeling prayers.

One who practices Odinism acknowledges the worthiness — the original meaning of the Old English word, “weorðscipe” — of the Odinic ideal by embodying Odin. A man becomes Odin by acknowledging the worth of the way of one who is always seeking, always improving, always willing to sacrifice a piece of himself to become more, to become better, to do more.

Be the loosener your own fetters.

Determine what you have that you need to give up — time, money, work, habit, comfort — and sacrifice it on the bloody altar of that vision.

When you are tempted to feel burdened or victimized by the hunger of your vision for sacrifice, remember that you are the visionary — the father of it all.

You are the god, the priest, the slaughter and the harvest.

(1) For more on training for honor, read my essay, “Train for Honor” in the collection A Sky Without Eagles.(2014)

(2) The translation is mixed and simplified, based on the comparative work done here:

I’ve done my best to mimic the reconstructed Old Norse pronunciation in the recorded version on that page, albeit with my own quirks and dramatic inflections. Following the example of Paul Waggener, I’ve made this a part of the opening of every Wolves ritual I conduct.

Comments closed. Discussion and comments on the MVT Forum, along with detailed articles and content. 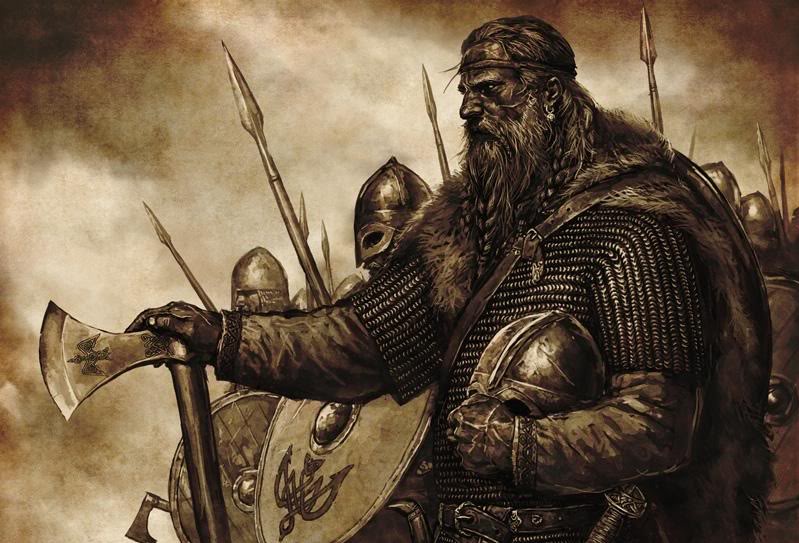