I’m just back in front of the keyboard after this past weekend’s 3 day Combat Patrol Class. Attending were 9 students. JC Dodge of Mason-Dixon Tactical also came up for the weekend to help out. From my perspective, the weekend was a success, and it went according to the training plan, but I will leave the final arbitration on that to any AAR’s I may receive from attending students. I’m also hoping to get some photos that I will post.

JC (left) and Myself (right – with cup of tea as usual) at the Class.

To give you a rough outline of the schedule for the class, without giving away any surprises:

PM: Ranges: Squad size break contact drills: center peel, simultaneous contact (front and flank), squad offensive contact drill – hasty attack on a bunker system. These drills are designed to move on from the team level drills focused on during CRCD and introduce more tools for the box at squad (multiple team) level. These drills are all rehearsed dry  before going live.

PM: Tactical phase. Ruck insertion to patrol base. Conduct of the full procedures for establishing a patrol base. Routine in a patrol base up until and including evening stand-to.

Night: student led reconnaissance patrols. Back in by midnight. Rest of the night, routine in the patrol base until and including morning stand-to.

The entire class is live fire. Because we conduct recce on live enemy, and sleep in the patrol base, I introduce new safety procedures above and beyond the usual CRCD class safety procedures. For non-live firing phases we do a supervised unload followed by a load with an inspected, marked, empty magazine, to ensure no negligent discharges on the recce patrol or in the patrol base. Before going live we have a little non-tactical break where we load and put ear pro in.

The entire class follows a scenario. Each time we move from teaching into a tactical phase, it follows the scenario. The scenario can be found HERE. Thus, it builds from establishing the patrol base in the AO, conducting recce to find the enemy, ambush to strike part of the force, raid to fix and finish the remainder.

Here are some of my thoughts that I would like to emphasize after the class:

I am proud of the performance of all the students on the class. Real troopers. It was cold, but it warmed up a little. With the weather on day 1, what they don’t know was that I was about to cancel the sentry duties in the patrol base and let them sleep until stand-to. However, it warmed up and they did it. I had considered that there may be refusals to get out of their sleeping bags, but that didn’t happen. I’ll talk about PT in a moment, but what is as important as PT is self-discipline and determination. The most miserable time of an infantry soldiers life is morning stand-to in the cold and wet. I was laughing with JC about how we were both getting out of our bags muttering and bitching that morning!

Internet commandos in the warmth of their own homes do not understand any of this. The students on this class showed up and showed the right mettle. Good stuff. I haven’t got time for people who talk the talk but don’t walk the walk. Posting in comments but never getting out and doing it doesn’t cut it. A lot of you out there are getting out and doing it. Those who attend my classes. Others such as Bergmann in Alaska spring to mind. The tacticoolers have no idea what they are talking about, no skin in the game

PT/Gear: The level of your PT, strength and cardio, will determine what gear you can carry. There is a certain minimum of gear, both fighting and sustainment, that you need to be able to carry to conduct light infantry/unconventional warfare operations. What this means is that you need to both do PT, and get smart, about how you plan to conduct operations.

Infantry ‘FreeFor’ style operations in an SHTF environment need to stay away from the tacticool. You are in both a combat and survival situation. This means that you need to carry a basic sustainment load. This is why I bang on about the battle belt. The battle belt will weigh a little, mine weights 25lb, but that is kind of the idea. It’s not all about saving weight when there is gear to be carried. That is where the basic PT/strength comes in. On that belt is your ammo but also some basic food, water and survival gear. 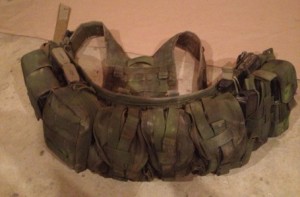 The only disadvantage with a battle belt is that the rear pouches make it not ideal for sitting in vehicle seats. If you think you are going to need to sit in vehicles for any length of time, then you can use an assault vest style rig. I have one. I can rapidly transfer gear from one to the other if I need to. The thing about an assault vest is that it should not be a ‘chest rig’ style set-up; like one of your classic rows of mag pouches with maybe a small sustainment pouch under each arm. With a proper assault vest, it has enough pouches to carry the same gear as a battle belt. The disadvantage is that it is around your torso and therefore not as good a load bearing set -up as a battle belt, but it keeps the pouches out of the small of your back to sit in vehicles. Here is  similar assault vest to the one I have: 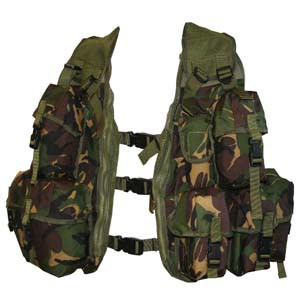 Whether you are wearing a battle belt or sustainment assault vest, they fulfill the same function of allowing you to carry an ammo load plus a basic sustainment load.

The next thing is rucks. I wrote a post about ‘Gear Philosophy Update‘ discussing the need to go lighter. It would help if you read that, to prevent me having to repeat myself. There are a couple of sides to the ruck thing. Firstly, don’t go too heavy. The only time you may want to do that is if you are rucking in to insert to a base and carrying additional supplies to cache at that base and conduct operations from. If you have to break contact wearing a too heavy ruck, you will have to dump it and you will never see it again – serious in SHTF where there is no QM replacing your gear. Also, without serious PT capability, you will be like an upturned turtle out on the ground and you are likely to collapse before you get a mission completed.

The flip side of not going too heavy is  that if you try and go light, but have to carry a lot of gear due to circumstances, you need an appropriate sized ruck. I saw too much at the weekend of people using these ‘tactical’ book bags, with the zippers instead of a top flap, with gear hanging off. That just leads to a nightmare when trying to pack gear away in  a patrol base, when it never goes back in like you packed it at home.  In those circumstances, it is better to have  larger pack that you can tighten down, rather than a tactical book bag and a load of crap hanging off it.

You can go round and round all you like, and you may hate to hear this, but the two best rucks you can buy for infantry operations are the medium and large ALICE packs. I love them. Get the tactical tailor versions if you want. If you have a problem with the ALICE, and I hear a lot of whining, it most likely comes back to PT, strength and lack of intestinal fortitude. It is the best all round pack for infantry operations. And, it is short and squat and fits ideally onto the rear pouches of a battle belt, worn at the right height (low).

Now, my advice to always go light has to be tempered with reality. This patrol class it was a very cold winter class. This means that packs needed to be large enough to fit the bulk of snivel gear and sleeping bags. In the summer you can get away with a lot less, but you have to factor in a greater water load. This is why I suggest the medium and large ALICE. The large is ideal for a full sustainment load. The medium is ideal for a true assault/patrol pack. If you are using the large pack, carry a roll-able smaller patrol pack that you can use either empty to later fill up and use as a patrol pack, once you get to the patrol base. Or filled and on the top of your ruck to use as a grab bag if you have to ditch your ruck. However, if you carry a patrol pack on your ruck, make sure it goes on or under the lid on top, and not hanging off the back of the ruck, which is an awful way to pack and carry your load. There is a USMC ruck with patrol pack that zips on the back that is long like an alpine pack: the whole thing is an abomination for an infantry load. 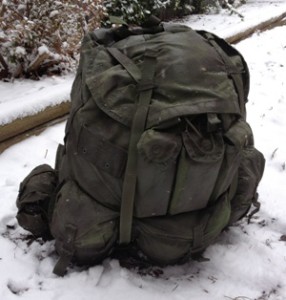 The Large ALICE I used at the Patrol Class

I carried my battle belt (25lb) plus a large ALICE packed with sleeping bag and snivel gear, plus an extra ammo load and rations for 3 or 4 days. It came in at 50 lb. When you are in a patrol base it is not camping. The outside pouches on the ALICE make it helpful to get to gear such as food and stoves without going into the main compartment. As a ruck it has sufficient capacity to easily stuff crap back into in the dark. I carry my sleeping bags in the bivvy bag and free from the stuff sack. This means that the whole thing can be stuffed back into the ruck in a hurry. It fills the available volume and can be compressed when you load other stuff into the ruck.

So if we go back to the iron triangle of PT vs. weight vs. gear you need, it becomes evident that there needs to be both a balance and a bit of creative thinking. I can’t tell you how you may end up operating post-SHTF. If you are heading out from your base to conduct patrol operations you need to be as light as possible while carrying a suitable mission oriented sustainment load in your battle belt and in your patrol pack/ruck. You are going to be unable to live for weeks at a time in the woods without resupply. So rather than think about hugely heavy rucks that you may not be able to carry, think about moving your supplies in by other means. Think about vehicles, horses, mules, deer carts, bicycles, ATV’s and the like. You can move gear up to the vicinity of the patrol base you are going to use, and either stack it in the base or have it cached somewhere in waterproof containers.

Unless you have the physical strength, you will be unable to carry huge loads. Even if you can carry it, you will move slower and be more vulnerable to enemy contact. We are not aiming to reproduce an overburdened big .mil infantry soldier here. On the one hand, FreeFor infantry operations are hard graft and you need the basic ability and mental strength to carry a decent fighting load. On the other hand, huge rucks are not the way forward.