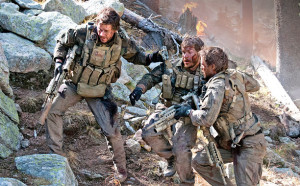 I had my hand surgery yesterday to get the hardware out, which allowed me to milk the opportunity to lay on the sofa and catch up on watching ‘Lone Survivor.’ What a great movie. I’ve heard a lot about this portrayal of Operation Red Wings and yes, it’s a MOVIE and some of the portrayed events, such as the battle in the village at the end, may not be quite accurate. However, watching the movie led to some thoughts which I will pass on today – this is comment based on the movie itself, not Operation Red Wings.

I don’t intend to dwell on the operational aspects of the movie, such as the re-tasking of the QRF Apaches etc. I want to mainly dwell on the parts that are relevant to the armed civilian – because none of us are about to take part in a Navy SEAL raid in Afghanistan, are we?

So, this was a 4 man Observation Post (OP) patrol ‘behind enemy lines.’ What can we learn from what was portrayed in the movie?:

No doubt more will come to me after I hit ‘post.’