MV: The author of this article, Misfit, has the professional background to inform/instruct on this  subject matter. Trust me. 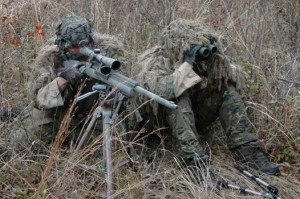 In regards to the great article (Guest Article: ‘Where do long range shooters fit in FreeFor SUT?’ by Skittles) I have few things to put out there.

Designated Marksman (DM): Based off of my experience I have seen the need and want to have a squad DM capability. This is something the military has struggled with in both training and equipping the squad. Also the fact the the M14 has remained in inventory for it to serve as a DM/Sniper rifle. If you look at recent history the acquisition of the MK12 was from the need of having such capability, the problem is that there was little to no training to implement and maintain this capability within the squad.

Giving the squad leader the ability to incorporate precision fire into the scheme of maneuver is a true force multiplier. Especially when collateral damage is not acceptable. This also gives him additional optics that he can use to his advantage. I would likely limit the squad DM to about 600m armed with a rifle that fires match grade ammo that matches the overall load out of the squad. Logistically it makes sense to have as many members with the same equipment. The 600m distance is what realistically a long range shooter in a combat situation will be able to reliably engage targets out to without the aid of a spotter. I know that there are a lot of guys melting down at this statement but I know this to be true, and that’s if he’s good. Again this is for the squad DM role. I don’t think having a guy patrol out with a long gun and his primary supporting a squad is the way to go. His role would be to engage high threat targets like machine-guns, comm, or leadership. This would be accomplished with his acquisition skills and training. He would also be able to separate with his fire team and be able to provide overwatch while the rest of the squad maneuvers. But again he is not autonomous and is still under the direction of the squad leader. (MV: ideal with the 12 or 13 man, 3 fire team squad) 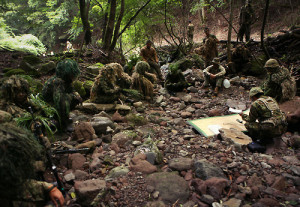 Sniper/ Scout Sniper: The term sniper or scout sniper is a capability that can and will be developed by FreeFor. Every modern war has seen the rise and often fall post conflict of this critical capability. A lone gunman is already hampered by not being able to sustain as long as a team or bring out additional equipment, making him operate close to home or his closest network, endangering them as well. He is also more venerable due to limited security while he’s attempting to accomplish his mission. Ultimately as a lone gunman he’s not accomplishing much on his own if he’s not passing info up or receiving high pay off targets. The lone gunman that takes out a guy on post and rolls out will find that the post just gets hardened and filled with another watch stander making that target harder for next time. I would say the ” sniper” is a team not an individual. The team has the ability to run missions independently or in support of SUT. All the individuals of the team are trained to a specific standard but each individual brings additional skill sets to the table that enhances its capability. For example communications, photography, sketching, forward observer, the list goes on.

The sniper or scout sniper team would be selected based more off field skills than marksmanship. What good does it do to have a long range shooter not be able to get within range of his objective before he’s caught or captured on egress? There isn’t always going to be that perfect spot to conduct business that’s easy in and easy out and at the perfect range. Sometimes its going to be long range sometimes the terrain dictates otherwise and field skills will be of utmost importance. The long range capability should be at least out to 1,000m or more. This gives the small team the standoff needed to survive in a high threat environment. With that being said they still need the skills to remain undetected both before and after business is conducted, whether it’s long range shooting or collecting information. The structure, tools, and task of what a guerrilla sniper team is has and does is grounds for another article or possibly course. 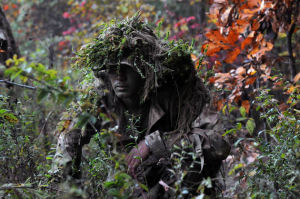 MV: there was a suggestion at the recent Combat Patrol weekend that I run a ‘Patrol II’ . There were various suggestions on this. Once of them was that I run a sort of advanced patrol/field craft class aimed at the recently discussed designated marksman role. The idea would be to spend three days concentrating on the fieldcraft side, leaving the long range shooting skills to another venue.This is a great idea and I plan on running with some iteration of it. I won’t, as a matter of principle, run specialist sniper/scout sniper classes on my own because I am not a qualified instructor in sniping. I will however  work on a course design and bring in experts (such as Misfit). I can contribute as a simple knuckle dragger with what I know of patrolling/SUT/fieldcraft and the deployment of such valuable assets. Watch this space.