Get Your Notebook Out 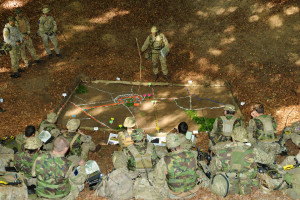 There are so many reasons for this!

In some sort of collapse situation, you may not have any electrical power, and most likely not any modern forms of communication, save perhaps battery powered radios. Internet? Forget it. You are not likely to be printing operations orders off your laptop.

In some sort of resistance situation, or civil war, or balkanization, against enemies foreign and/or domestic, you have to assume that you have no OPSEC, and that the technological capabilities of the enemy will be far greater than yours. Thus, if you use any technology, it will be broken, tracked, direction found, jammed etc….

I see a lot out there on the blogosphere about how to emulate the military, for things such as communication and operations procedures, as if somehow the military have got it right. Newsflash! They are hopelessly hamstrung by their own technology.

What do I mean by that? I mean the over reliance on technology,  ‘operations orders’ (OPORDs) and ‘fragmentary orders’ (FRAGOs – which effectively supplement/update the operations orders). The over indulgence in staff work. I mean, don’t get me wrong, logistics are important, and they have to be organized, but when you have chains of command sending each other updates to the FRAGO back and forth on their computers, and arguing about widgets, nothing gets done with any sort of competence. I mean, forget getting inside the enemies OODA loop! Did the enemy get the Frago? Probably not. Can we organize that simple convoy operation? Hell no! That’s when it needs a competent NCO to take the candy (laptops) off the officers, make everyone go outside to the motor pool, line up the vehicles and stand next to them. You know, like old fashioned soldiers used to do. A convoy is not run in a virtual world, it’s real.

There was that hilarious comedy video posted a while back, linked on WRSA, I think from AmMerc, about how the ‘internet is down’ and the ensuing chaos. Yep, that’s what I’m talking about.

The other part of this over reliance on technology is that mission command goes out the window. Mission command is where commanders ‘command in their own sphere’. It means that you give missions as a task(s) with a ‘unifying purpose’, thus giving them the ‘why’ rather than the exact ‘how’, all within the specific operational framework. In this sense, subordinates are able to go away and get on with it, coming back for support and clarification as they need it. A commander then supports his subordinates with assets as required, and directs as appropriate. It is this sort of excessive overwatch – the ‘long screwdriver’ if you like – that stymies initiative. Couple that with over-strict rules of engagement and you have a problem. Should the soldier engage the enemy? Wait while the General puts down his coffee and comes to look at the video feed to make that decision….it’s that kind of madness that stops local commanders from sending rescue forces in to save lives at, fro example, Benghazi (and that is generously giving it the benefit of the doubt, assuming we will not confuse malice with incompetence).

So the point is, don’t try an emulate the military. Well, let me change that – don’t try and emulate Staff Headquarters and the modern military. What you want to be trying to emulate is something like Ranger School, or the 1980’s. Low tech, out there in the woods. Using your paper map in it’s map case, and your notebook and pen.

You should carry with you a ‘Tactical Aide Memoire’ (TAM) which you can create yourself in a waterproof notebook. Or, you print out pages and put them in waterproof inserts. We used to use a thing called a ‘Nyrex folder” which was a notebook (A5 size) made up of plastic sleeves. This meant you could insert printed pages laid out with spaces whee you could fill in the required info. Thus, when you were doing a combat estimate, or writing patrol orders, or raid orders, or whatever, you were able to write on the Nyrex folder in the spaces using  permanent or non-permanent marker. You then wiped it off after.

If you had a simple TAM it would contain the various bits of information you needed, such as formats for orders for various sorts of patrols, attacks etc. This also helps to make sure you don’t forget to cover stuff.

If you are out in the field, or at your patrol base or retreat, you will give your orders in a certain way. If you are inside, you may use a map board and have everyone seated in a briefing room. However, I intend to give a quick sketch of how low tech orders would be given in a patrol base setting.

Once you have a mission, as part of your battle procedure, and you have done your commander’s recce (if applicable) and you are ready to write your orders, you will give out a warning order, to start concurrent activity. This allows all that needs to be prepared, to be gotten on with. This will mainly allow admin and logistics to be taken care of as you are getting ready to give orders.

You should detail an assistant to make a model (i.e. similar to a sandbox affair) while you are writing the orders. This should hopefully be someone who has seen the ground, perhaps the recce patrol commander or similar. What he will do, in the center of the patrol base, is create a model of the ground. This is what it will be like:

When it comes time to give the orders you will have a seating plan, for where your various commanders and their teams will sit looking in at the model.

You will then cover preliminaries, such as weather, map area to be used, (the seating plan), and task organization – who will be doing what and in what groups.

You will then go through your classic five paragraph orders, modified for the specific mission (In Contact, I have several orders formats laid out in a TAM format, for your use).

In Patriot Dawn, I actually describe this when Jack goes through orders prior to a mission:

The basic orders format is:

Wen you get to certain parts, such as signal, you may be advised to have the expert on that step in and give that section. Example: have the platoon sergeant step in  and give logistics, such as ordering people to carry one thing or another, or don’t wear that piece of clothing, or whatever. He can get mean like that, it’s what he does.

It is traditional to state the mission twice.

It is also traditional, once you have got through the execution to the end of coordinating instructions, to have a breather. This should take the form of “Ok, everyone, notebooks down, look in to the model” – at which point, you go through a summary, a simple verbal description of what you are going to do, using a stick as a pointer, to make sure everyone understands. When you give a set of orders such as this, this is your chance to sell the plan. You have to lead them, to persuade them of the plan’s viability and purpose. Your verbal orders have to be confident and clear, to bring them with you.

Once you complete the orders, ask questions. Don’t offer them for anyone to answer. Pose the question, pause, then ask someone for an answer. The purpose here is to determine if everyone understands what they are doing.

Once you have given orders, give a little time for everyone to go away, sort themselves out,and come back for rehearsals.  What you are aiming for with rehearsals is to select a similar bit of ground. For example, if you are doing an ambush, try and find somewhere secure and close to the patrol base to do the rehearsal that is similar to the ambush site.  Of course, you will need to post security to do this.

You will run the team through noisy then silent rehearsals.  You get them in the order and groups that they will be in for the patrol. You run through the actions and formations for the route to the objective, action in the ORP, actions on contact and all that. You then run through the ambush itself, and then the extraction and route back to base, plus all the standard SOPs such as action on enemy – both contact and pre-seen.  The noisy rehearsals are done as a walk through instruction with you talking and moving people around. The silent rehearsal is done like that, silently, as a mini-version of the patrol itself.

Once that is done, it is time for admin, food etc. If the tactical situation allowed it, you would test fire weapons. Then, at the allotted time you will head out on the patrol.

The point here is that this is simple, low tech. It does however require detailed organization to make it work right. It’s that sort of attention to detail that will ensure, for example, that when you are trying to occupy the ambush position, with everyone knelt in single file in the dark, everyone is in the right order and the right group so they can be led in to the right positions.  Occupying an ambush, or moving into position to begin a raid, is not the time to experience a cluster-fuck. You can’t herd cats at that point, or fix a massive cluster, so everyone has to be clear what they are doing. The more OCD you are during orders and rehearsals, the better.

However, the other side of that is remember: “No Plan Survives Contact With The Enemy”, so be prepared to be flexible and adapt as necessary.

In this video, which I have posted before, there is a little clip of a model in a patrol base and the platoon getting ready to receive orders: