This is a follow-up post to the two gear posts:

And as such it should be read in combination with those posts. Notice that I have updated the gear photo (above) from the one that I used in those posts, which is below:

There is not a huge difference between the gear displayed, merely a different rifle and Lite Hydration Pack, plus I have added the helmet to the mix for purposes to be explained below. This illustrates the point that this post is not about SPECIFIC BRANDS of gear, but rather the MVT Lite Fight concept that I have been advocating in these various blog posts.

In this post, I will be making some detailed comments. This post is specifically about putting all this gear together for wear during combat conditions, and will not cover the ground in detail about how you will escalate, or combine, or choose items of gear to escalate your everyday carry as a response to increased threats. That was covered in detail in the two linked posts above.  This post is about putting this MVT Lite Fight concept together when the threat is extant, we are conducting combat operations, the hammer already dropped, the balloon went, up, and there are possibly bad guys in the wire. You are conducting active home base defense / ground domination activity. This does not mean you lose all flexibility, and you still have the option of combining or dropping items depending on the mission, terrain, duration, distance and weather.

The MVT Lite Fight Concept consists of the following, numbered in the photo above:

All this gear put together should be both the maximum, and the minimum, that you would expect to carry on any operation away from your home where there is any chance of contact with the enemy. This means any operation ‘out of sight’ of your home base, and any patrol where you are not literally within a 100 yards or so of that home base. If you are at home base, then you can choose what you will wear i.e. what elements of the system. There is nuance and reality to add to this, which I will discuss below. Please remember the premise: we are now in ‘combat conditions.’ However, reality will play a role, and you will have to adjust your profile depending on the exact specifics of the mission you are on – bartering at the local farmers marker, for example, will likely see a deescalation of this combat profile and you will leave gear in the vehicles.

Yes, you will look like a soldier in this gear. It does not have to be multicam, but the bottom line is that if you are conducting combat operations, you need to be equipped as a light infantryman.

One of the main drives of this concept is to carry enough to be effective, but not so much that you become ineffective. Refer to the previous posts for discussion of second line ammunition and ration / water logistical scales on support vehicles. There is a balance of strength and fitness versus weight, and depending on your limitations you may have to adapt this concept to suit. That will be discussed below in the detail. You do however have to do whatever physical conditioning you are able to handle, if you are considering a light infantry combat role. If you are prevented from carrying the minimum of this gear by age or physical condition, then you should look to a support role, situated out of the home base where you can contribute to security by standing watch and being part of the static defense team. You are likely to be able to primarily contribute in areas other than security in a considerable manner, depending on your skills and attributes.

For those who are equipped in this manner they need to be physically conditioned to be able to maneuver under enemy fire. They must be trained and rehearsed in team tactics. You cannot run this type of thing with a pick-up team, if you want to stand any chance at all. This is all a balance between firepower, mobility, and protection. There is no perfect solution.

Below: Crye Nightcap with PVS14 mounted. 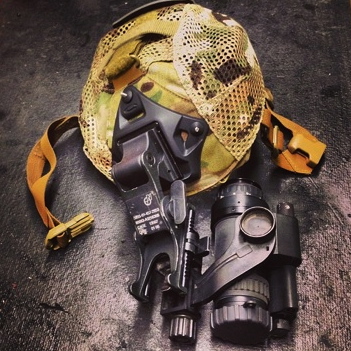 (2) Plate Carrier. There are a number of notes on the Plate carrier (PC):

The Ergonomics of Gear Wear:

A reminder on these two links which should be read in conjunction with this post for the full story:

There is active discussion on a number of these gear and weapon matters on the MVT Forum. There is a $25 per annum joining fee. This keeps the trolls away and the discussion civilized and rational.