I have written two recent posts on gear:

These posts have been more slanted to discussing particular styles of rigs and load-out options for gear about your body, rather than rucks and the like. Most of you know that I am a fan of the battle belt, as in the properly set-up battle belt rigged up for light infantry operations. You may also recall that I wrote a post some time back about the dangers of ‘fundamentalism’ – and in this spirit I am not a ‘fundamentalist’ when it comes to the battle belt. I have worn all sorts of rigs in my time and I want to ensure that I am giving the readership a full host of options, rather than just my obstinate opinion.

There will be more to come on the FLC: as an exercise, I have decided to rig mine up as if that is what I am going to wear, and give it a run out in the woods. I will post on the updates to both the set-up and also how I feel about it. I know some of you just don’t want to go to a battle belt, for a variety of reasons, so I hope to best serve you by doing this.

In my opinion, we established that a fully rigged battle belt is best for dismounted  light infantry style operations – out in the woods, living as unconventional infantry. Operating out of vehicles, perhaps a little more urban, mainly where sitting in some sort of chair is involved (I don’t say that as a joke!) then a battle belt is still workable but not ideal. You need to remove bulky pouches from the rear/small of the back. Hence the chest rig/PC/assault vest style rig – not ideal for sustainable operations in the woods, but workable. You tend to end up with a bigger, heavier patrol pack, and thus more negative implications if you end up dropping that pack. The eternal merry-go-round of balances and compromises. Just look at footage of US Marines in Afghan, wearing their body armor, with a limited number of pouches, with gear rear-loaded to large and heavy patrol packs, including their canteens.

It’s all good if you can “GET TO THE CHAPPA!” 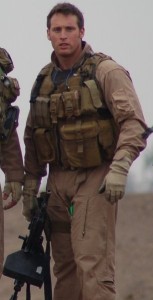 Above: Running High Profile in Fallujah. There was really no ‘low profile’ option

However, another reason why you want alternatives to the battle belt, and even the bulked out FLC/assault rig, is due to profile considerations. In my time in Iraq and Afghanistan I had the opportunity to operate in both high and low profile ways. I have run full high profile contractor-style moves, vehicle packets moving keeping all other vehicles away, due to the threat from SVBIEDs. I have also run much lower profile and covert style moves, whether that be recce or otherwise. That gives me some experience and perspective on running low profile. 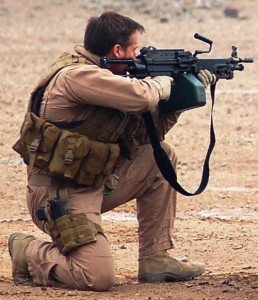 For a start, many out there have no clue. For example, they talk about carrying an ‘EDC’ bag, and to the casual observer it is so tactical a bag it is obvious. They just cant avoid the tacticool give-aways, like the ball cap. I also want to be clear that I am not talking ‘covert’ here. I am not talking about the greasy guy with the suppressed .22. I am not talking hit-men or mafia style operations. I am referencing the ability to move in a lower profile, and therefore a more surreptitious manner, after an SHTF event.

For example, I have found a some photos and posted them here:  examples of me in various guises, I think they are mostly from Iraq. What is not shown is the attempts at moving covertly, using low profile local vehicles.  Beards, nasty Iraqi gas station glasses, shemaghs, local shirts rigged up over plate carriers: all attempts at moving covertly in vehicles. Let me tell you: if you have the right vehicles, use locals to drive ahead and check the route, move in the right way, and dress as such, you will get close. But once you are close, you are made. Get out of the vehicle, you are made. You just stand out as westerners. This translates across to anything you want to do in any ethnic specific areas, or even just red neck/country areas of which you are not a part. You may get close, but then you are made. And local vehicles with several big looking dudes in shemaghs will get you shot at by Coalition/Iraqi security forces, if you catch them on the hop. I know 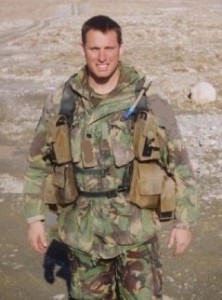 So, we are not secret agents, we are just tying to get by with a lower profile, slip under the radar. It amazes me how some just don’t have a clue. I had a vehicle movement article published on a large prepper website a long time ago. I was accosted in reply letters by some army ‘major’ with engineer OIF experience, who thought I was talking about having dudes sticking up out of sunroofs? He didn’t have a clue, he just didn’t know what he didn’t know, and he missed the point by a mile. His only frame of reference was Humvee’s with gun turrets. You don’t drive around with rifles sticking out of windows or sunroofs. It’s just not cool, not done. Unless you are Iraqi police…. 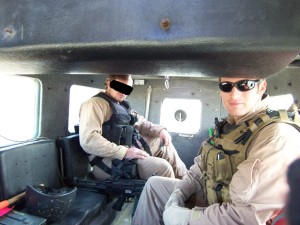 Above: Back of a Reva APC, Fallujah. Gunners ready to go up into the turrets. Trip into Fallujah. We lost a guy to sniper fire on a mission just like this.

So, you need to give a lot of thought the the situation and the threat, and what you are trying to achieve. So many are so clueless that they have no idea what low profile is. Reminiscent of the movie ‘Team America’ and “Super Secret Hiding Positions”. ‘merica, fuck yea! 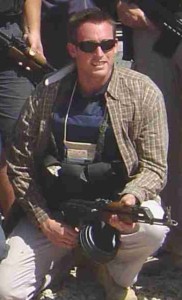 It is easy to conceal a handgun, we do it every day. It is not so easy to conceal a long gun and the ammunition to feed it. Long guns are best hid in vehicles. You can even have it on the seat as you stand by an open door. You can conceal a lightweight chest rig under a shirt or jacket. ‘Man-Bags’ also work, so long as they do not look too tactical. A shorter barrel rifle can be suspended by a single point sling from your shoulder and hang down beneath a coat or jacket. It does not give full concealment but it makes it less obvious. You have to ask yourself what you are trying to achieve. Do you want to look tactical bad-ass to deter threats? Is everyone armed post-SHTF and you just want to fit in while carrying a rifle, but just not look too much of a tactical bad-ass threat? 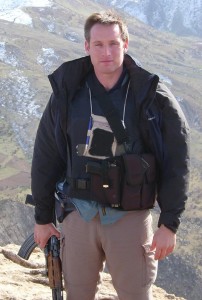 Above: Kurdistan. I opened the jacket to get a shot of the gear. Cold weather is an ally to- lowering your profile. Full body armor with plates.

Weather is a great asset or enemy of lower profile. It is easier in the winter, with bulkier jackets and concealing clothing. Not so easy in the heat of the summer when you want to be wearing a t-shirt. In the Middle East, we mostly wore full sets of body armor and chest rigs, whatever profile we were adopting, and you have to learn to live with your under-shirt constantly soaked with sweat. This is one of the reasons that I ask people to think long term and visualize what they will actually wear as time goes on. Will they wear that full PC around the farm, or start to adopt a more comfortable duty-belt style of dress? Have options.

Above: In the woods of West Virginia. Battle belt.

You can wear a full set of body armor with full rifle plates and a chest rig under a shirt or jacket. It is not covert but if you are in a vehicle it reduces the profile. Lowering your profile can be as simple as driving around in normal looking vehicles with your rigs covered by shirts and long guns down out of sight. If you are contacted, you can shoot (in a non-armored vehicle) out of the vehicle through the closed windows and even the body of the car. Ask me how I know

On foot, maybe bugging out or for other activities, poses another set of challenges. Do you open carry as a deterrent? Do you rely on route selection to lower your profile/mitigate threat? If you have to carry long guns in bags or otherwise, it will slow your reaction time. Be ingenious. This is situationally dependent. You have to ask yourself, if you are operating in the woods (not just bugging out with your family) then your profile is lowered by your skill at patrolling, use of camouflage and concealment. If seen, you are obviously armed fighters, so just wear your light infantry combat gear. Act as if you are under potential observation at all times.

The circumstances will determine if camouflage gear is suitable. Military or hunting? Or just wear, or have available, solid earth toned clothing. You can then maybe leave your rig and rifle at a secured rally point, and go to the meet with a civilian wind-cheater on over the top, or whatever. Handgun concealed not in a drop leg, as appropriate to the situation.

The conclusion of this is that none of us know exactly what SHTF will look like, and the specifics as they apply to each of us. You need to have options, and give thought to the profile/posture you present and how you want to appear to others. You may have to step away from yourself to get a full appreciation of what you wear/look like and how you conduct yourself.