I recently posted about ‘GEAR: Your load-out options: discussion & comments.’ As I was surfing the interwebz I saw a post on TSLRF that sparked my interest: ‘Fighting Load Contest #9 Archer Garrett.‘

I’ve been chewing on it for a while. What sparked my interest? It was the fact that Archer uses a military surplus FLC Molle vest as the basis for his load-out. Cheap and practical. Just enter ‘FLC’ into Google Images and see what you get. Interesting stuff. Thing is, you can get an old desert version of this vest off Amazon for $17. HERE. Yes, you need to buy the pouches. Krylon will amend the color. 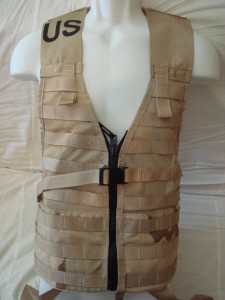 $119 on Amazon will get you the ACU version with some pouches (Krylon will fix the ACU): 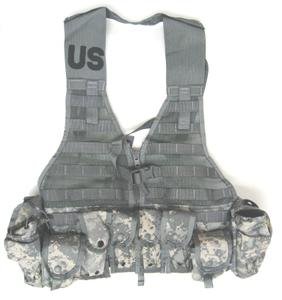 I am sure there are multiple other options you could get with research.

However, you are probably asking: “But Max, why? You only ever use a battle belt! Did you lose it?” Well, today I want to talk about the FLC and a little about the battle belt. I am also going to follow up with a post on load-out  profile considerations.

FLC: I have one of these, which is what sparked the interest. I was issued one (I’m in the US Army Reserves), and I have amended it from the basic issue. It also suffered an accident with a can of Krylon, which has toned down the ACU nastiness. The stuff of First Sergeant’s nightmares!

I talked about this kind of option in the previous post (GEAR: Your load-out options: discussion & comments) and this is the kind of gear that I was referring to.  It is set up as an ops vest/chest rig, used in conjunction with a larger patrol pack, and is suited to operations where you are operating out of vehicles.

Here is my FLC: 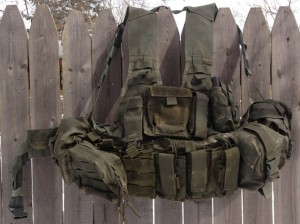 Front view: (from left): Bottom row: IFAK, admin, 6 mag single pouches (3 x 9mm pouches on front), 4 mag X-4 pouch, canteen pouch. On top row, from left: seatibelt cutter, admin pouch, leatherman, GPS. So, I can have 10 mags, my IFAK, canteen and various ancillaries on this rig. So it is a mix of chest rig and front load sustainment rig. I limit the magazines on the direct front to single stack to try and reduce the amount of ‘belly’ on the front, so that even with body armor I still have a chance at going prone. 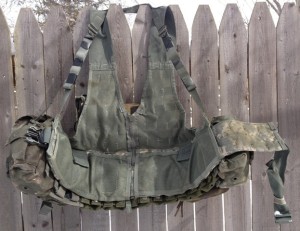 The important thing to note here is that I amended the FLC. Normally it opens on the front like a waistcoat, which is convenient, but it does not adjust rapidly. Not good for body armor/no body armor switches, or even clothing layer options. What I have done here is reverse the belt, so the rig goes on over the head like a H-harness, and buckles up with one adjustable buckle on the rear left. This also allows pouches (such as my magazine and admin pouch), to use the full front of the vest, not being divided by the zipper. The thing is, I really like the FLC, it is versatile, comfortable and does a good job, with or without body armor. Oh, if only I didn’t have to go prone to avoid dying, it would be the total answer…;-) (as with all chest rig/assault vests!) Remember, if the shit goes down SHTF, you will likely be outnumbered and outgunned, so you can’t stand tall and fight, from your armored Hummer/MRAP!

Here is my Camelbak patrol pack. Love this guy: as a 3-day pack, not a full ruck: 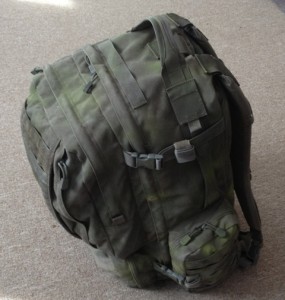 So, this is how I am rigged for vehicle mounted operations. If something happened where I had to operate out of vehicles, or even had to pull QRF sitting/sleeping in a chair, this would be a good rig. It un-asses the pouches from your rear/butt. I have the option of grabbing this and loading it up to go if it suits better than my battle belt.

It is NOT AS GOOD as a battle belt for dismounted operations. It is designed to better allow sitting, and not so much for going prone. It encourages a standing/sitting/kneeling posture and fire positions, somthing that I have talked about before – the prone is vital when the bad stuff really starts coming, and many have a real problem with operating prone. So, this is not an option or an excuse that is better than a battle belt. It is simply an option based on anticipated deployment. My Camelbak patrol pack works equally well with my battle belt and fills the role of a three day patrol pack very well. You can’t fit the kitchen sink in it, which is the point. You don’t want to.

A rig like the FLC goes very well with a drop leg holster. I have a Specops-Brand version which is very good and sits tight to the thigh, not too low in a tacticool manner. Remember that, again, a drop leg is not ideal for running/prone/fire & movement light infantry style operations. For that, the handgun is best on your belt.

If I was rolling into vehicle mounted / urban style operations, I would consider wearing my FLC with drop-leg holster.

A couple of notes on battle belts: I posted about my battle belt here: ‘MVT BattleBelt – Evolution‘. in no particular order:

So why all the talk about the FLC? I know many of you prefer a chest rig to a battle belt option. Many are concerned with working in vehicles/bugging out etc. The FLC vest provides a cheap and versatile option for mounting pouches to in many configurations. You could wear it with or without a battle belt. You could minimize pouches to give it a lower profile and fitting it as a waistcoat beneath a jacket. Or you could go full grizzly, like the photos of mine and have it rigged up as a full battle load. I find the FLC very comfortable, and with the belt reversed it fits and adjusts very quickly.