My previous post on ‘Gear & Camo’ HERE drew a response about camouflage. This is a very subjective topic and I notice several comments regarding the Vietnam Era Tiger Stripe that I mentioned I was going to try out. I have a few more comments on the camo topic, which I will put down here: 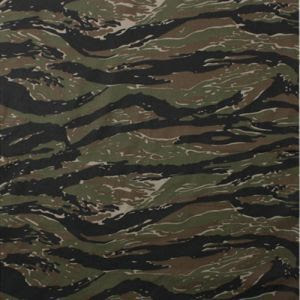 Vietnam Era Tiger Stripe
Obviously, camo is a personal subjective topic that will depend on a lot of things such as your AO, what you can afford or are willing to spend money on, and what sort of profile or ’image’ you want to portray. So, to a certain extent, camo is a little like tactics, and what are tactics like?  Assholes, because everyone has one!
So first off, don’t invest all your confidence in your camo. You will do very well in just tan/natural colored clothing matched roughly to the environment that you are working in i.e. greens/browns for woods, more tan/coyote for desert etc.
The pattern on camouflage clothing is only really designed to work at closer ranges, out to around 25 meters. After that is is just the general color of the camo that counts. An example is the British DPM (disruptive pattern material) which will only disrupt the observer out to around 25 meters and after that you become just a blob colored to the mean color of the material i.e. a greeny browny blob. So don’t get too tied up testing camo to long ranges, because it really will just be an average colored blob as you get further away. 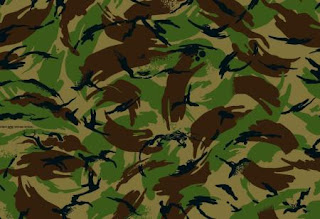 British DPM – now replaced
So don’t get too tied up in it. You can decide if you want to wear a pattern that is good for multiple environments such as a multi-cam, or specific environments, such as a woodland camo, or no environments save gravel pits such as the ACU! Where you will really go wrong is wearing a pattern that is designed for a specific environment in the wrong environment, where the base colors are just wrong. An example would be wearing the older style desert uniforms in the woods – its mostly tan/yellow, and would not mix well with the greens/browns in the woods. 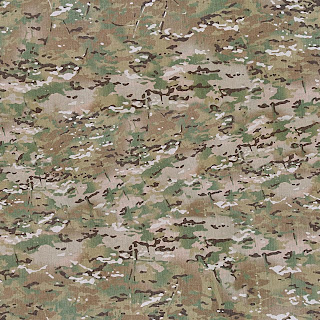 Multi-Cam
Don’t forget all the other reasons why things are seen: shape, shine, shadow, surface, spacing, silhouette, movement, aircraft, thermal. Don’t forget use of terrain masking using cover and concealment.
The other side of this is that most of these camo materials are actually designed to be military uniforms. To that extent, they have a ‘look.’ I am definitely not at all about being ‘dress right dress’ but there are two sides to this. If you choose to wear a certain type of camo uniform, then you are taking on a look. This can be good, or bad. You will not always be hiding in the woods and if you decide to outfit your unit in a certain style of camo then you will inherit the profile that goes with that style of camo. Also, armies use distinctive dress and items of uniform to designate elitism and to engender pride and competition. You can ignore this or use it to your advantage.
As an example, I am running tactical instruction courses in the woods so I was looking for a BDU camo pattern that looks smart and works well; both as a personal image while stood in front of people instructing and also tactically in the woods. TS seems to fit that. Why? Because it’s good camo, maybe not perfect, but it also looks sharp. Does that mean I’m all about looking snappy? No, but it’s a factor.
Let’s look at that from a different viewpoint: I could wear British DPM, but I don’t have all my old stuff with me. I could have gone with woodland BDU, which would also work well, but that seems a little done. Why is that? Because it has an image that I don’t necessarily want to follow. Now, those that know me know that I am a fan of the Militia; we are all in it after all, but we might want to get the image right and break from previous bad images.
What does Mr. Sheeple think when he thinks of the Militia, due to all that bad PR, deserved or not:
1)            FBI/ATF raids on extremist compounds?
2)            White supremacists: therefore he/she/it must vote libtard to assuage his/her/it’s liberal guilt?
3)            Huge fat dude rolled into a set of woodland BDUs, busting at the seams?
So if you are a Militia unit or a resistance fighter, at a gun show or moving into a village to meet the local elders and try to establish an AO, think about the impression you give. Maybe something different, such as Vietnam TS, or multicam, or something else, would be better than woodland BDUs. Just a thought.
The other side of that is that it’s not just about ‘looking good’ but about being good and acting professionally. A large part of your torso at least will likely be covered with gear, such as your PC/web gear/vest and that has to be a certain color. That’s the problem the military is having with bringing in the new camo patterns – they want different versions for different environments, but they have bid for one standard pattern for gear in all environments. Wearing your gear is a large part of your visual signature, so that needs to be camouflaged. You can use spray paint to adapt or alter your gear accordingly. And that is not even to mention mud and dirt that will get on your gear and mask its color as you conduct operations, which is mostly a good thing as it makes you the same color as the dirt.
Although an irregular unit will not likely standardize ‘uniforms’ even though they may standardize gear to be carried and locations for items, there is something to be said for a level of standardization of ‘uniform’ if it generates esprit de corps. Having a certain camo pattern may help: it may help with interactions with locals, reduction of friendly fire and even a psychological effect on the enemy if your unit gains a reputation. This is something that you can take from regular forces and not ruin by going to the extreme of being fully ‘dress right dress’ and bringing the bullshit factor; rather utilize it sensibly to your own benefit.
But just wearing a uniform won’t make it happen – ‘all the gear no idea’ – if you want to ‘talk the talk’ be able to ‘walk the walk’. Make sure your equipment, carriage of weapons, deportment and behavior is professional. Make sure you are professional and tactical when conducting operations. You can give the Iraqis/Afghanis U.S. surplus camo, but that does not make them a professional force.
So what am I saying, just to clarify before someone gets the wrong idea and goes off on a tirade.
1) Camouflage clothing is an aid to remaining concealed. Don’t get stuck on it.
2) Camouflage clothing has a whole host of other factors and implications, such as ‘look’ and impression given.
3) Give thought to how you and your team will appear to others who observe you, both in times of peace and war.
I’m not against woodland BDUs – if I try the TS and don’t like it, I’ll probably try those – it’s $50 for a full  pants/shirt outfit, so it doesn’t break the bank. What I won’t be wearing is my issue ACU’s, I can tell you that much. My gear is mainly multi-cam and I may spray that up a little with more green/brown to make it match the woods a little better. Other than that, I’m not going to go down a rabbit hole with anyone over the ultimate best camo, because I’m just not going to do it.
However, I would be interested in replacement ideas for the standard militia uniform. Any suggestions to move away from the woodland BDU image? Does Vietnam Tiger Strip cut it? Please leave comments – we may start something on the interwebs.